As millions of Americans watched from their living rooms as President Trump addressed the nation, I had the incredible privilege... 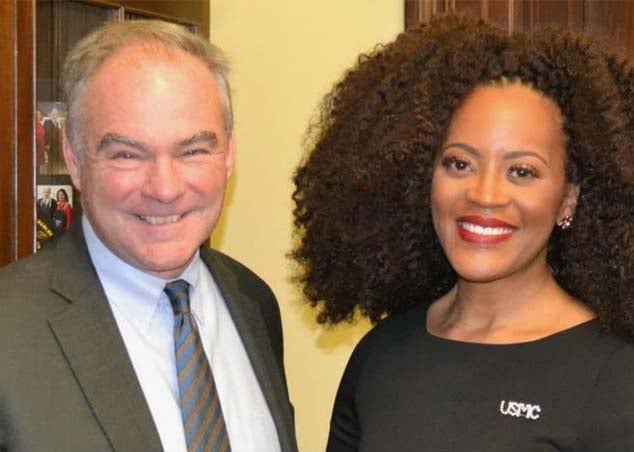 As millions of Americans watched from their living rooms as President Trump addressed the nation, I had the incredible privilege of representing military spouses and the Military Family Advisory Network in that historic chamber. I was invited by my home state Senator, Tim Kaine from Virginia, who was kind enough to allow me to tag along for the afternoon leading up to the main event.

So, what is the State of the Union Address and why does the president appear before the full, joint session of Congress to address the nation? Well, because the Constitution says so. The first part of Article 2, Section 3 reads:

“He shall from time to time give to the Congress information of the state of the union, and recommend to their consideration such measures as he shall judge necessary and expedient…”

The State of the Union Address was delivered in the chamber of the U.S. House of Representatives. To get to the chamber, I rode the Capitol Subway System, an exclusive transit system that isn’t open to the public unless you’re a member of Congress or a staffer on Capitol Hill.
Upon arrival, staff ushered us to our respective gallery and confiscated our electronic devices. This was definitely a no-selfie event. Lawmakers filled the middle of the House Chamber, and Democrats and Republicans divided by party lines. Republicans on the right and Democrats on the left. In the front row were members of the Supreme Court, Joint Chiefs of Staff, and cabinet members.
I sat packed in the House gallery with war heroes, citizens who performed acts of heroism, lawmakers, public figures, and even Bill Nye “The Science Guy” (who sat just a few seats down from me) at the biggest political spectacle of the year. The experience was surreal, to say the least. It was one of those moments that I look forward to sharing with my kids and grandkids one day. It’s ranked high on my list, along with the time I met former First Lady Michelle Obama during a Mother’s Day tea at the White House.
The pomp and circumstance surrounding the event didn’t disappoint. It is as theatrical as it appears on your television. When I’ve watched the State of the Union Address at home, I’ve always wondered if all of the standing ovations were real and necessary. Was it someone’s job to stand on the sideline and cue the crowd to applaud? Does the president intentionally use faddish words to get people off their feet? At least that’s how it appears on television, right? Before last night’s speech, I jokingly said to a Senate staffer that I’m well hydrated for the cardio that I’m about to endure for this reason.
I honestly didn’t know what to do. I found myself clapping when others were clapping, standing when others were standing. But that got exhausting quickly. It was reported that there were somewhere around 39 pauses for applause and 75 standing ovations. The applause really rocked the house when the President mentioned anything about veterans. I spotted Senator Kaine on the chamber floor sitting next to Senator Elizabeth Warren, who I ran into earlier in the hotel restaurant but shied away from to avoid having a fan-girl moment. Anyway, from then on, I just copied Senator Kaine; if he clapped, so did I. If he stood, I stood, too.
Pundits have dissected the State of the Union speech better than I ever could. The rapid-fire tweeting from journalists sitting across from me described much of what it felt like to be inside the chamber. Everyone walks fast and talk even faster. I couldn’t keep up. But what struck me the most about last night was the President’s idealistic speech about the strength of America and a boisterous economy. What I also heard was fear. There was fear of gang-related violence, criminal immigrants, and foreign threats that could potentially send our loved ones into harm’s way.
I applaud the administration for highlighting military and veterans issues, but there are also some immense challenges facing today’s military families that impact the quality of life of the force as a whole. I had hoped that we’d hear more about the administration’s plan to reduce military spouse unemployment and examine the effects frequent moves and reassignments have on military spouse careers.
There are so many questions that still need to be answered on how to address the unemployment gap. Many military spouses like myself who have given up our life and career for “the mission” didn’t get an answer last night. That brings me to the main reason I was invited by Senator Kaine.
Last year, Kaine met with a group of military spouses to discuss obstacles to employment for military spouses and the financial strain it puts on service members and their families. On Friday, Kaine will announce The Military Spouse Employment Act of 2018. The bill takes steps to reduce military spouse unemployment and examine the effect frequent moves and reassignments have on military spouses’ careers.
Somewhere between 12% and 25% of military spouses are unemployed–with an additional 25% facing underemployment (meaning they are underpaid or have skills that are underutilized compared to their training)–causing negative ripple effects across the military. Military families frequently face financial insecurity due to spousal unemployment, which is an often overlooked military readiness issue.
I’m mom to Kailey, Kirby, and Keegan. I’m a Marine spouse, author, and retail entrepreneur. Between five deployments, ten jobs, and six cross-country moves (including OCONUS moves), I decided that entrepreneurship was the best career path for myself and family. By no means was my journey easy. In fact, the demands of the military life made it ten times harder.
My story had an impact on Senator Kaine, whom I had the honor of introducing in 2016 before a presidential campaign rally near Camp Lejeune Marine Base. My story is reality for thousands of military spouses who know first-hand how much we sacrifice daily in service to our country, and the limitations and financial stress it can have on a spouse’s career and their family. Senator Kaine’s invite was a signal to military spouses across the country that he is grateful for our service and he’s got our back.
We are fortunate that we get to see democracy in action. Not many countries give access to their people. Also, it isn’t lost on me that out of all the things Senator Kaine could have adopted for the focus of his guest, military spouses were at the top of his priority list. It’s proof that military families truly do stick together, as he is a Marine dad.
Thank you, Senator!