Living the ‘Golden Rule’: The story behind the viral photo of a soldier’s funeral salute

In a viral photo that hit the internet last week, a Soldier saluting a funeral procession while standing in a... 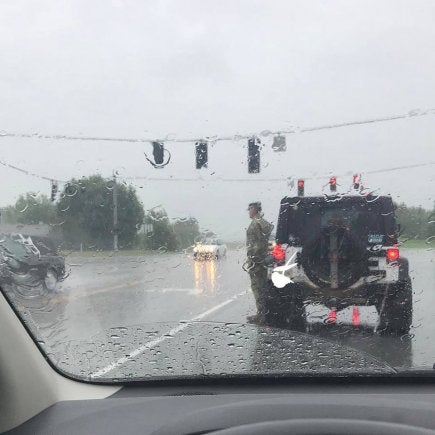 In a viral photo that hit the internet last week, a Soldier saluting a funeral procession while standing in a torrential downpour has finally been identified as Col. Jack L. Usrey, the senior Army advisor to the adjutant general at Tennessee National Guard Headquarters in Nashville.

While driving last week from Fort Knox, Kentucky, the colonel met a funeral procession, stopped, got out of his vehicle, and paid his respects to the deceased.

“I didn’t really think,” said Usrey, a native of Martin, Tennessee, with more than 29 years of military service. “I just did what my parents taught me to do growing up. I stopped, got out, saluted the police escort and held my salute as the hearse and family passed by, then went on my way and didn’t give it a second thought.”

The photo was taken and shared on Facebook and Instagram by Erin Hester of Vine Grove, Kentucky, on July 6th. Since its initial posting, the photo has garnered more than 187,000 “likes,” been shared nearly 130,000 times, and generated more than 8,600 comments.

Hester wrote in her Facebook post, “I was so completely touched by this today. A funeral procession was passing by and this soldier got out of his jeep to stand at attention in the pouring rain. I always get frustrated when I see cars that don’t pull to the side and stop for a procession, but this gentleman went above and beyond.

“I feel pretty confident that there isn’t a military rule that soldiers have to do this,” Hester continued. “This made my heart happy to see the amount of respect that this gentleman showed a family that he doesn’t even know.”

A mutual friend at Fort Knox contacted Hester and said the fort knew the identity of the Soldier in the photo, and then contacted Usrey. Hester expressed her appreciation personally to Usrey by phone once the two were connected.

Since enlisting in the National Guard in 1988, Usrey has served in multiple roles ranging from tank platoon leader to Executive Officer to the Assistant Secretary of the Army (Manpower and Reserve Affairs.) His numerous operational and combat deployments have taken him all over the world, including Operation Enduring Freedom in Afghanistan and Operation Iraqi Freedom in Iraq.

Throughout his nearly three decades of service, the moral values that Usrey learned from his parents have only been strengthened by his time in the Army. For Usrey, who strives to demonstrate humility, honor, and respect in his daily life, the rapid ascent of the photo was surprising.

I guess it goes to show how simple it would be for our nation to be more united if we just treated each other using the Golden Rule.”