Lunchtime at dinnertime? Solving the school lunchbox dilemma can be done the night before

As the chef and owner of Cafe Du Jour on the South Side of Pittsburgh, PA, Paul Krawiec runs the... 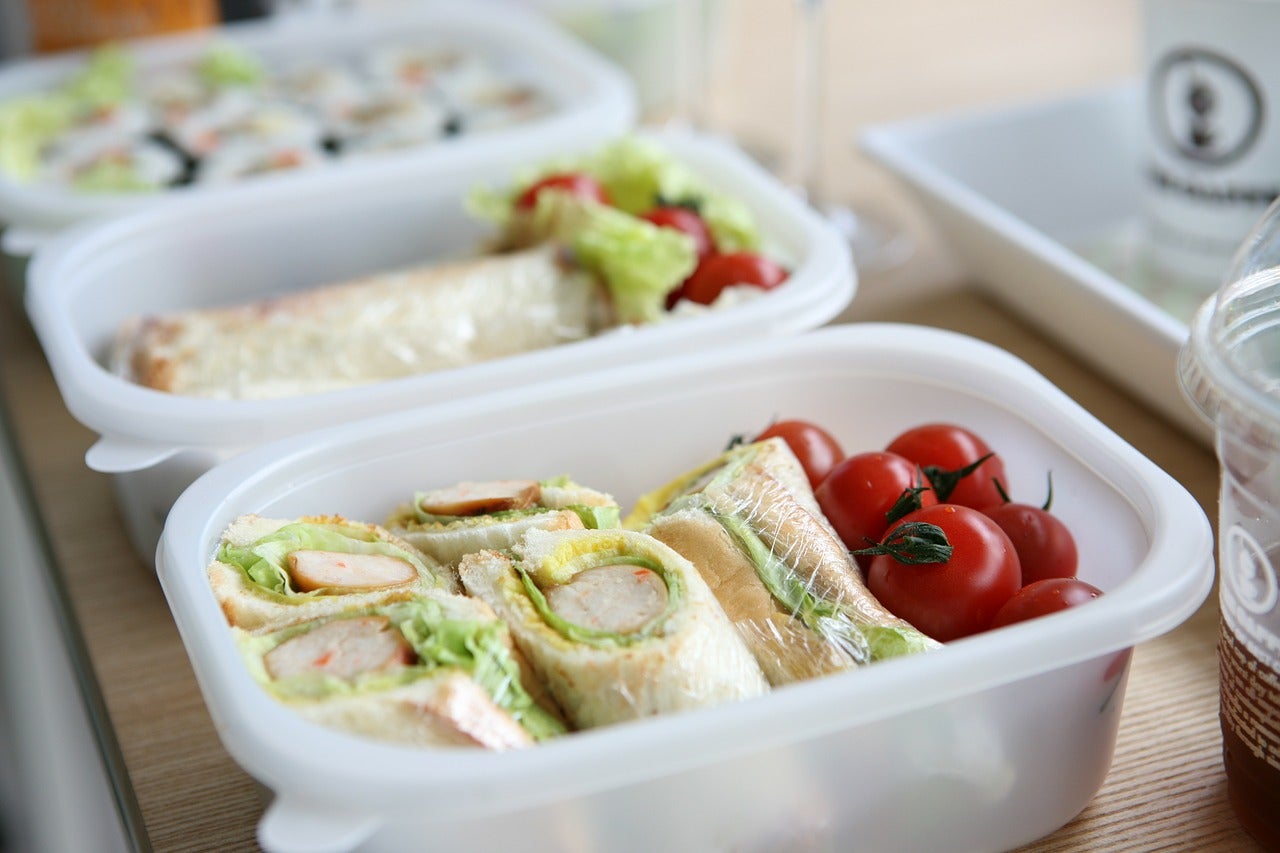 As the chef and owner of Cafe Du Jour on the South Side of Pittsburgh, PA, Paul Krawiec runs the show at the popular eatery where culinary adventure is the soup-du-jour, so to speak.

Both have two children: Fuller’s are teenagers; Krawiec’s are younger. And both dads have taken the responsibility for packing their kids’ school lunches — Fuller from his Morningside kitchen and Krawiec’s from his homebase in Baldwin Borough.

As we dive into September and a new school year the two have the same advice for lunch-box packing: Keep it simple and give them what they like.

“For a long time, I was putting turkey between two slices of (soft-style wheat) bread with some lettuce for my daughter with mango on the side and, for my son, it was a slice of ham on bread with mustard — just a little bit of mustard, and some grapes. That was about it,” Fuller said. Occasionally, he’d ladle into a Thermos some leftover pasta with cheese or red sauce; or assemble some cheese sticks aside crackers and fruit; every once in while, the lunch box was packed with cold leftover pizza.

Krawiec sheepishly admitted that lunch for his soon-to-be 7-year-old son is most often canned chicken soup and ravioli from a can. “He won’t eat sandwiches and he doesn’t like my homemade soup or spaghetti and meatballs. It drives me crazy, but he will only eat them if they come from a can,” he said, noting that his 4-year-old daughter will be getting similar lunches at her all-day preschool.

He echoed Fuller’s sentiments that it’s most important to send children to school with a lunch they’ll eat — even if it’s somewhat embarrassing for a professional chef.

“I’ll never forget trying to put a cheeseburger in a Thermos, cut into pieces (last school year). It was an abject failure. I went back to the canned soup,” he said, noting that every once in a while he’ll put some deli turkey on a stick. “He’ll eat it if it’s on a stick,” he said wryly.

Not all parents feel that way.

An unofficial survey of friends, colleagues and family revealed that I was not alone when I celebrated the cessation of packed lunches when my younger daughter moved away to college.

For 16 years, I had packed lunches for my girls, neither of whom liked luncheon meat. I had done the peanut-butter-and-jelly entree with sides of apple and baby carrots; cold cereal in a Tupperware bowl along with milk money; soup in a Thermos that never worked very well.

After some brainstorming with Fuller and Krawiec, we concurred that the prime time for thinking about lunchtime was suppertime.

Many dinners can be deconstructed then reconstructed into a fresh take on lunch. Kids should be happy — if they liked it at dinner, they’d like it at lunch. Parents should be happy: for just a bit of extra effort in the evening, the morning routine would be vastly simplified.

I decided to test this idea within a set of conditions:

The dinner menus I started with were:

Spaghetti with marinara sauce was simple. I chopped a small onion, minced a couple of cloves of garlic and gently sauteed both in a couple of tablespoons of olive oil. Then, when the onion was translucent, I added a can of good tomatoes, breaking them up with a fork. (If you have fresh from the garden, blanch them, peel them — the skin will remove easily — then squeeze the seeds from them and use them in place of canned.) I added a splash of red wine (a tablespoon of vinegar will do, too) and about a teaspoon of sugar followed with a shake of salt and pepper and a couple tablespoons of dried parsley. (If you sub in fresh, use about a quarter-cup, chopped.) Although it takes only 10 minutes to make homemade marinara — less time than it takes to cook a pot of pasta — you can use a jar of marinara or spaghetti sauce. Either way, if you top each bowl of pasta with some good Parmesan or Romano cheese, it will be tasty.

Turning this dinner into a lunch fit for packing was simple.

I squirreled away a little extra pasta before serving dinner (about 2 ounces) to became the foundation for a pasta salad. It can be as simple or as complex as you like. I went with simple, pouring about a quarter-cup of bottled Italian dressing over the warm pasta, using my kitchen shears to mince some sliced salami into the bowl, cubing a bit of cheddar cheese, and sprinkling in a few grape tomatoes. You could add chopped diced green pepper and onion, olives and artichokes. Either way, voila!

Since we’re looking for quick-to-the-table endeavors, I picked up a roasted chicken from my local grocery. I boiled most of a bag of baby-cut carrots (reserving a small handful) as well as some new potatoes (cook extra for reasons you’ll read about later) on the top of the stove while I carved the chicken, reserving the pickings. After I boiled the baby carrots until tender, I drained them and topped them in the pot with a couple of tablespoons each of butter and maple syrup and I sprinkled them with dried parsley, salt and pepper. (I put the leftover potatoes in the fridge.)

After the dinner table is cleared, take the chicken pickings and any other leftover meat and add to it some chopped celery and diced onion. The amounts should be to your personal taste. Spoon in some mayonnaise, just enough to bind it together. Line a flour tortilla with some lettuce then spread with chicken salad, roll up, and cut in quarters. Tuck into a storage box with some raw baby carrots and there’s lunch.

Fry enough bacon to make the number of sandwiches you need and plan to have four extra strips. Reserve at least four tablespoons of rendered fat. Make the sandwiches with lettuce, tomato and bacon and a bit of mayo, if you like. After dinner, take the leftover boiled potatoes you stashed away the night you served roasted chicken and slice them. Then, in the pan with the reserved bacon drippings, saute some celery (one rib) and scallions (three) until tender — if the kids like veggies. Leave them out if they don’t. Add a 1/4 cup of apple cider vinegar, 3 tablespoons of sugar, one tablespoon of flour, salt and pepper to taste then bring to a gentle boil, stirring to combine. Add the strips of bacon, cut into pieces, as well as the sliced potatoes (I had about a cup.) Reduce the heat and add the sliced potatoes and the reserved bacon, crumbled. Refrigerate over night but microwave in the morning to take off the chill.

Sear a chuck roast big enough for dinner plus leftovers, on top of the stove then transfer to a slow cooker along with some red wine, some quartered onions and some sliced fresh mushrooms. (You can ready this the night before then press the start button in the a.m.) Serve at dinner with some crusty rolls. Take the warm leftover beef and shred by pulling in opposite directions with two forks. Add a bit of bottled barbecue sauce or make your own with ketchup, vinegar, and sugar, all in portions to taste. Tuck the beef into some extra crusty rolls and you’ve got sliders. Potato chips on the side.

My go-to style of chili one from my husband’s cousin Richard that is simple and yummy. It’s a pound of ground beef, a large chopped bell pepper, a large chopped onion, a can of whole tomatoes broken up, a large can of tomato soup and, at the very end, a can of drained and rinsed kidney beans. Saute the veggies in a bit of butter until tender then add the beef, draining the rendered fat, then add the soup and tomatoes. Season as you like with salt, pepper, chili powder, red pepper flakes. Cook a few minutes then add the beans, serving when warmed through. With the leftover chili, stir in a handful of grated cheddar or American cheese. The next morning, warm in the microwave and transfer to a storage bowl and send with corn chips for scooping.

As for the cantaloupe, cut some that wasn’t eaten at dinner into bite-sized pieces and top with cottage cheese for another day’s lunch.

Bill Fuller of Big Burrito had some concluding words of advice on packed lunches for kids.

“Every once in a while, you got to throw something sweet in there — some snack they’re not supposed to have. That keeps them happy!”