When I spoke with Marine Captain Maggie Seymour, she was in Gore, Oklahoma. A small town of just 900, she... 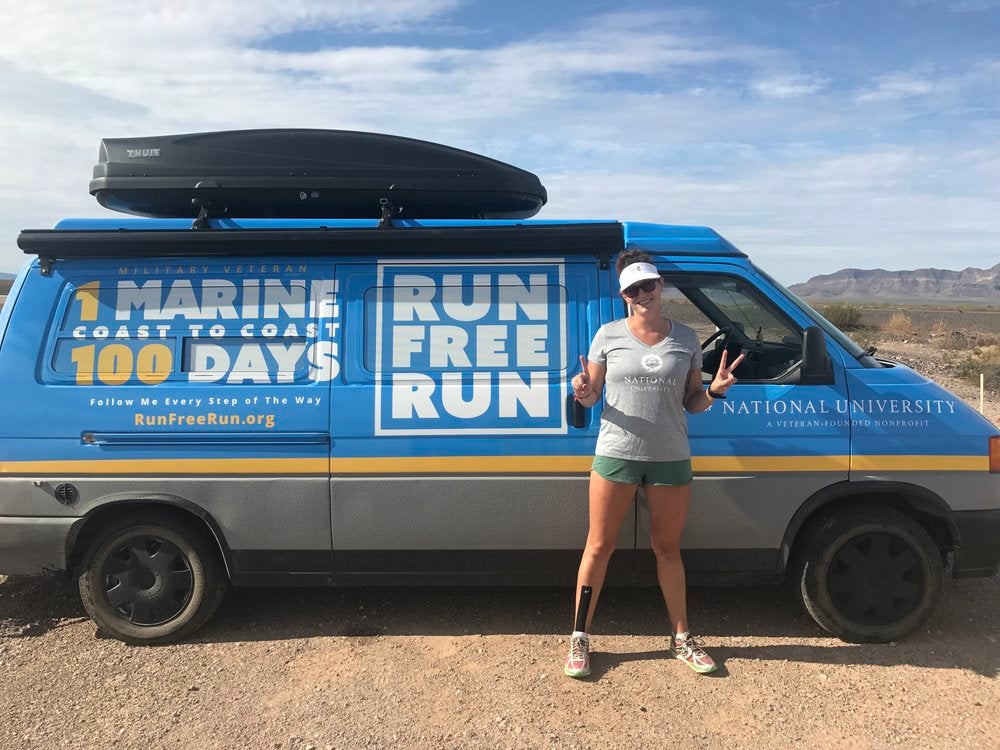 When I spoke with Marine Captain Maggie Seymour, she was in Gore, Oklahoma. A small town of just 900, she was 56 days into her three-month trek across the continent, and she’d just passed the 1,550 mile-marker. On foot.

Having served ten years on active duty in the Marine Corps, Seymour is transitioning to the Reserves by doing what even the most determined endurance athletes have only dreamed of: Running across America. From San Diego to Virginia Beach–with a slight detour through Washington, D.C to run the Marine Corps Marathon–Captain Seymour’s last mission as an active duty Marine is to raise awareness for the communities who have supported her during her service.

Tall and fit, with dark brown hair and a self-deprecating sense of humor, Seymour has been a long-distance runner for years. She’s participated in multiple ultra marathons of 50 kilometers or more–always to raise funds for veterans, Gold Star families, and disabled athletes–so running across the country seemed like the next logical progression.

“It sucks,” she said when asked what running more than 3,000 miles feels like. “It hurts. It’s boring and overwhelming mentally. It’s hard to do the same thing every day and wake up and remind myself that I want to do this.”

But Seymour keeps running despite the painful blisters, muscle soreness, and miles of monotony.

“I can’t quit,” she said. “Even though I’ve thought about the monotony a lot. What did I win at the end of the day? [The fact that] I get to do it again tomorrow. But then I think about the people who get up every day and just get on with it: Veterans with mental health issues or special needs parents or people suffering from addiction. They don’t get to quit.”

She laughed quietly before adding, “Also, I told everyone I could do it. So, I can’t quit. That’s not really an option.”

Fueled by a vegetarian diet of potato chip sandwiches, pizza, Mexican food, and Dr. Pepper, she covers at least 33 miles a day. “It’s not the healthiest diet,” she acknowledged with a laugh, “but it gets me through.”

The night we spoke, she was relaxing in a motel room thanks to the sponsorship of National University and the non-profit organization Honor and Remember. Spending 100-plus days on the road doesn’t come cheap, and she’d originally planned to pay out of pocket, cutting costs by camping in her support van. But between staying with friends who live along her route and the generous donations of her sponsors, she hasn’t had to camp once. And that’s a good thing considering how hot it’s been and how far she runs each day.

“Having access to showers and ice baths has been key,” she said.

Although her run has been a (mostly) solitary endeavor, she’s not on her own. Her support system consists of a team of drivers, each on a two- to three-week rotation. Among their variety of tasks, they take care of her feet, feed her at regular intervals, and make sure she’s hitting her mileage goals.

She also admits that this experience has strained her relationships with her team. She doesn’t like to ask for help until she’s nearly incapacitated, and she’s had to learn that helping is what her support team is there for. “It’s tough on relationships,” she said. “You have this idea that it’s going to be this big thing, but it’s tedious and boring and it’s a lot of work.”

Although the days and miles are long, when asked what the best part of this experience has been, Seymour answered without hesitation. “The people. Unequivocally,” she said. “One of my goals was to meet people in small towns. Towns that remind me of my hometown. [Since joining the Marine Corps] I haven’t spent much time in middle America. I’ve lost touch.”

Running across the country has given her plenty of time to reconnect to her roots. “The people in these places are generous,” she said. “They pay for my meals. They come talk to me. They interview me for their local papers. They give what they can [to the causes I’m running for].”

Along the way, veterans and military families have also come out to show their support. In Amarillo, TX she was presented with an honorary Purple Heart from a Vietnam veteran–an experience she described as “humbling and wonderful.” In Canadian, TX, she was hosted by a Gold Star family at their farm, where they made her vegetarian food and let her rest her legs for a few days.

And in a time of heightened political animosity in America, the people she’s met in these small towns have reminded her that civility still exists–even in political discourse. “I had dinner with a VFW captain. [We talked] about political issues, and we didn’t agree. But in these places, people still talk to each other and share a meal. They still have meaningful conversations with people they don’t agree with.”

And if you live along her route and would like to get involved, she encourages you to follow her on social media and join her on a run for a few miles. “Yes, I’m raising money for specific causes,” she said. “But my overall goal is to inspire people to get involved in their own communities.”