“Uncommon valor is a common virtue” has always been a representation of the way U.S. Marines interact in their day... 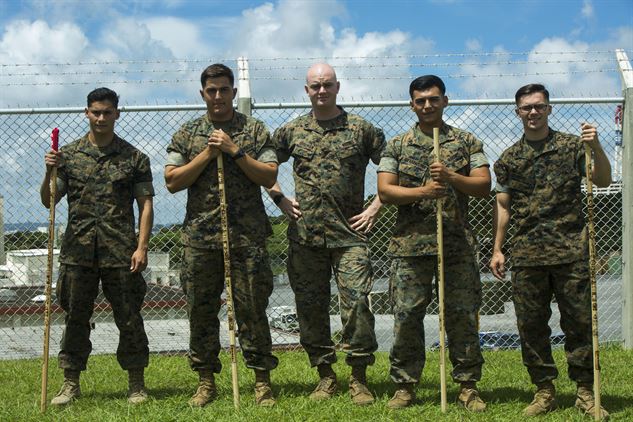 “Uncommon valor is a common virtue” has always been a representation of the way U.S. Marines interact in their day to day lives. The Marine Corps is held to a higher standard because of the profound actions performed by Marines not only on duty, but off.

Cpls. Otto Thiele, Christopher Ehms and Eric Goodman and Lance Cpls. Antonio Martinez and Avelardo Guevara Osuna were hiking Mount Fuji during the 4th of July weekend when Thiele came across another hiker crying for help. He looked up and saw Goodman waving his hands and yelling in the distance. Thiele ran up to meet Goodman and the rest of the Marines and saw two Japanese locals, a father and his daughter, Yoshihiro and Moe Oda, in extreme distress.

The woman was found lying on the ground with a very high fever and was shaking drastically when her father communicated to the Marines that he didn’t have a vehicle and needed his daughter to be carried to medical attention. Without hesitation, the Marines created a makeshift stretcher using their hiking sticks and t-shirts.

“For us, it was second nature,” said Ehms, a ground radio and microminiature repairman with Combat Logistics Regiment 35, 3d Marine Logistics Group, III Marine Expeditionary Force. “Immediately we [thought], ‘She needs to get down; let’s get her down.’ We were so calm during the situation.”

Ehms ran ahead of the other Marines to get medical assistance as they transferred Moe to their makeshift stretcher. They moved down the rocky terrain of Mount Fuji as quickly and safely as possible, eventually reaching medical personnel. Meanwhile, the woman had passed out and her body had gone completely limp. They placed her inside of a vehicle and were left to wonder if she would be ok.

A couple of days later, Goodman, a ground radio repairman with CLR 35, received a message on Facebook from Wataru Yamada, a bystander who was also there to assist Moe during the emergency. He let them know that she had successfully recovered and thanked the Marines for their kindness, bravery, and for the Marine Corps’ friendship.

“We were all really worried about her,” said Thiele, a microminiature repairman with CLR 35. “It was pretty touching to get that message.”

Yoshihiro also reached out to the Marines to express his thanks and how impressed he was by their quick thinking and ingenuity in creating the makeshift stretcher to carry her down the mountain.

All five Marines exhibited bravery in a high-stress situation and made it look routine because of their training, compassion, and character.

Gunnery Sgt. Justin Judson, a shipping and receiving microminiature repair chief with CLR 35, says that he’s worked with these Marines for a while and he wasn’t surprised. “If they didn’t help, I’d be shocked.”