Mattis isn’t even ‘Mad’ about his real call sign

Defense Secretary Jim Mattis doesn’t usually reveal personal details to the public, but recently he told us a good bit... 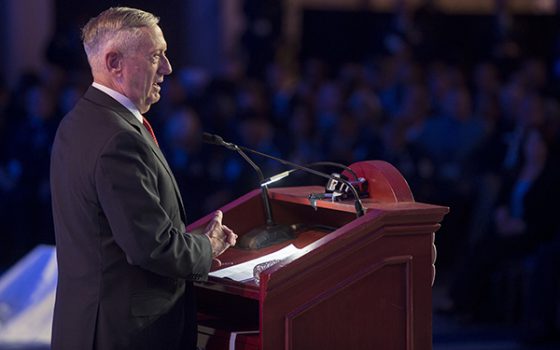 Defense Secretary Jim Mattis doesn’t usually reveal personal details to the public, but recently he told us a good bit about his call sign, which is “Chaos.”

For those of you who don’t know, a call sign is pretty much a nickname. They were originally given to communications stations, facilities, commands and units so they could be uniquely identified over radio transmissions and telegraph lines.

Call signs can be structured around a unit’s nickname – Bulldog 6, for example, might be assigned to an Army company commander. They can also be given to an individual in jest, due to an embarrassing incident or misfortune, or because of an unusual way that person operates. While they can be embarrassing, they’re usually considered to be a great honor.

Mattis sees it that way – especially since he picked his himself.

The defense secretary was recently asked about his press-issued nickname “Mad Dog” during the Air Force Association’s Air, Space and Cyber Conference. His response — he didn’t have any clue where that nickname came from.

“Even my troops laughed at it when they read it in the newspaper,” Mattis said, getting laughter from the crowd. “It was a slow news day, I think, and somebody made it up.”

Instead, he said his longtime call sign is Chaos, a nickname he earned back when he was a Marine Corps colonel.

“When I was a regimental commander of 7,500 sailors and Marines out in the Mojave Desert, there was nothing to do but go blow up the desert,” Mattis said. “I always had good ideas – at least I thought they were very good ideas. And one day, walking out of my operations officer’s office, I noticed ‘chaos’ written on this whiteboard. I said, ‘What’s this about?’”

The officer replied, “Oh, you don’t need to know that.”

But Mattis’ curiosity got the best of him, and he kept asking.

“Finally, [the officer] kind of said, ‘Well, it means the colonel has an outstanding solution,’” Mattis explained. “It was very much tongue-in-cheek. They didn’t consider all my solutions quite as outstanding as I enthusiastically promoted them.”

Was Mattis mad about it? Nope – quite the opposite.

“I liked what my irreverent troops had used there, so I adopted it as my call sign,” Mattis said.

And that’s that! Maybe people will stop calling him Mad Dog now?