Lorine Vines’ downward spiral began in the Navy when, she says, a higher-up sexually assaulted her. She didn’t report the... 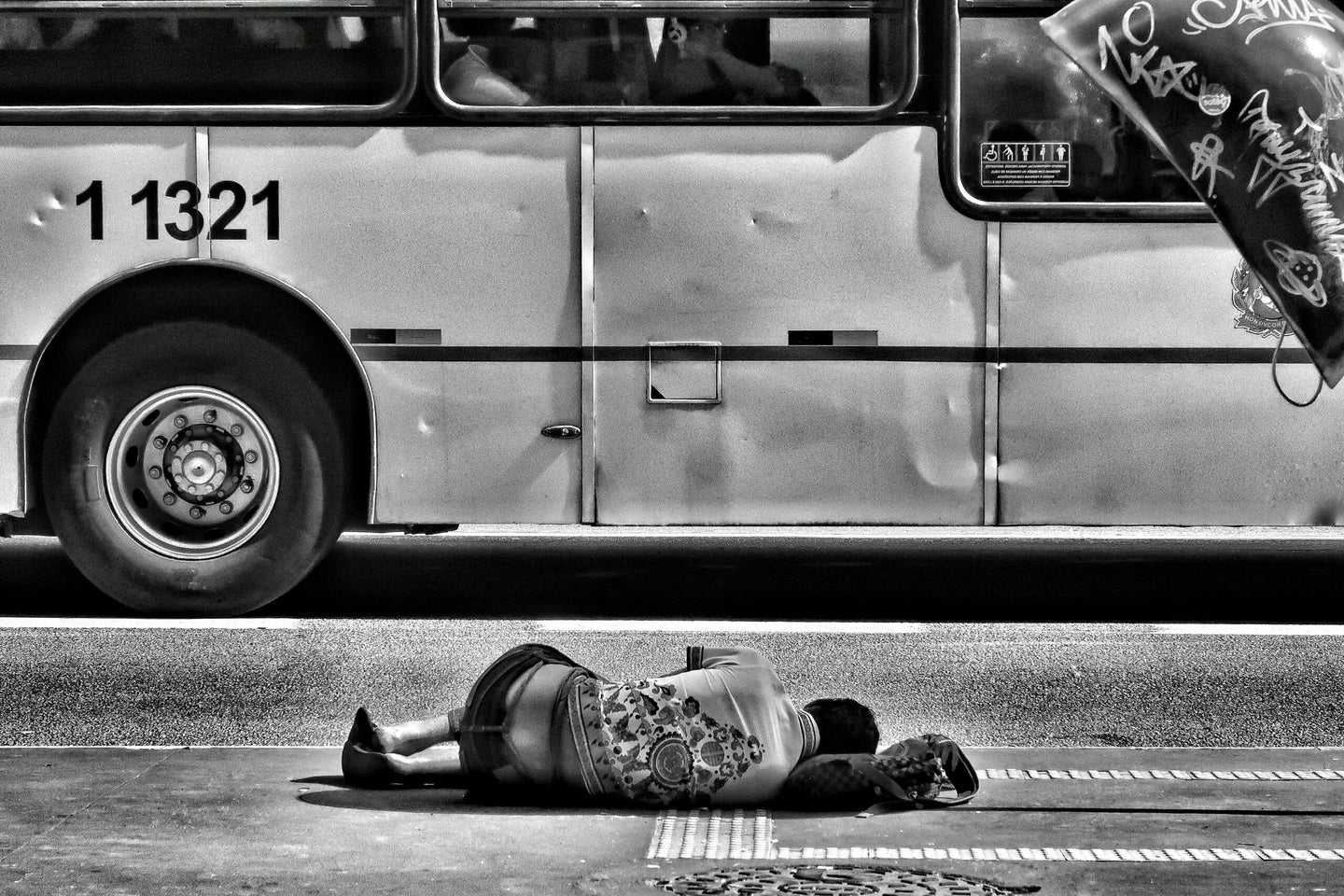 Lorine Vines’ downward spiral began in the Navy when, she says, a higher-up sexually assaulted her.

She didn’t report the incident, she says, but every day faced her rapist. She turned to alcohol and drugs to cope.

“I was having nightmares and dreams, and all I could see was him,” says the 56-year-old veteran, who served in San Diego, Calif., starting in August 1980.

Vines left the military in 1986, but her alcohol dependency, anxiety and depression followed, and only worsened with the untimely death of her 16-year-old son. Her addiction caused rifts within her family and made it difficult to keep a job, she said. Eventually, she became homeless.

But a turning point came in October 2016, when she visited the 24-hour service-intensive residential housing facility Maryland Center for Veterans Education and Training, or MCVET, where she quickly became a resident and student. She’s been sober ever since.

“I’m not as mad at myself anymore. I can’t explain it, but just being here, it feels like I’m getting my life back,” Vines said. “Even though I still miss my son, I know I don’t have to drink now. I don’t have to get drunk to make it through.”

The nonprofit MCVET, funded through the federal government, various organizations and private donations, has offered housing and a range of services for homeless male veterans since its launch in 1993. In 1997, it opened its doors to female veterans, serving as one of a handful of resources in the city — along with Veterans Affairs Maryland Health Care System, Project PLASE and Safe Haven — that work to meet their many needs. Serving these women often means addressing issues such as post-traumatic stress disorder, unemployment, poor health, mental illness, domestic violence and military sexual trauma, or MST.

It’s difficult to quantify the population of homeless female veterans, but there are indications the number is growing. Locally, 10 percent of Baltimore’s homeless population as of January — or 276 people — were veterans, according to the Mayor’s Office of Human Services. Female veterans account for around 3 percent of the total veterans seen in the homeless services system, a number that has remained constant over the past three years, according to Terry Hickey, director of the Mayor’s Office of Human Services. Nationally, the number more than doubled from 1,380 in 2006 to 3,328 in 2010, according to limited U.S. Department of Veterans Affairs data analyzed by the U.S. Government Accountability Office in 2011. The Virginia-based nonprofit Final Salute Inc., which serves homeless female veterans, has published estimates in recent years that there are 55,000.

“We do see the number of female veterans rising, and that’s not just in the homeless program, but in all of our programs in general, and that follows the trend with the number of females entering the military. … As the military opens up more career fields for women, we see a higher percentage,” according to Christopher Buser, Army veteran and chief of social work at the VA Maryland Health Care System. Buser stated that around 13 percent of female veterans are homeless in Maryland.

“Most people, when they are referring to veterans, the stereotype they have in mind is a male veteran, so making sure that our female veterans are recognized in their entirety is something (that’s important),” Buser said. “The issue of homelessness is one that is not unique to just male veterans. It’s not just veterans who served in combat either. Most of our homeless veterans have never seen combat, so we want to make sure that we sort of dispel those stereotypes.”

Homeless female veterans, themselves, are not always aware of available veteran housing services, which can pose a challenge, according to the GAO.

Buser said that, like men, female veterans experience post-traumatic stress disorder, unemployment or underemployment that can make keeping a home difficult. Women, however, are more likely to be fleeing domestic violence and to experience certain health issues that can contribute to homelessness.

MCVET is one of the few places that aims to not only provide transitional housing and day drop-in programs, but also to address the causes of homelessness among female veterans, according to Executive Director Jeff Kendrick.

“Anything that a person needs in terms of their therapeutic care … we will provide them,” said Kendrick, adding that the program also assists veterans with obtaining important records, including birth certificates, driving records, financial reports and taxes.

MCVET offers a total of 17 single-room occupancies for women, of which 15 are occupied, and provides them with a wide range of services, including access to case managers and off-site specialists, mental health professionals, and clinicians. The program also has weekly women’s group meetings, hosted by a case manager, where female residents can talk about their concerns.

Residents of the single room occupancies are no longer considered homeless by federal standards, according to the Mayor’s Office of Human Services.

“Our rooms at any one time can be full and then within 30 (to) 90 days, they can be empty again because the women who rode through their program very quickly” gravitated to programs and took advantage of the services MCVET offers, Kendrick said, noting that an average stay for women can be less than a year, whereas the average male vet may be a year to 15 months.

But Kendrick said “there needs to be more emphasis on a housing solution” for female veterans, especially those who have children.

According to Buser, “Many of our veterans who have children are reluctant to kind of come forward and tell us about the true extent of what’s going on in their lives. They are concerned that if they talk about being homeless, that they may lose custody of their children, that social services will come in and break the family up,” he said. In other instances, Kendrick said, mothers will leave their children behind in order to get the services they need.

Kendrick said MCVET’s goal is to eventually expand its facility to include all services in-house and to provide housing for family members and children, but space is limited, and thus, more funding is needed. MCVET is researching expanding services and working toward accrediting more projects, he said in an email to The Sun; officials are considering expanding the current Jonestown facility or adding a building within the next two to three years.

Cereta Spencer, director of development and community engagement, said MCVET continues to host multiple fundraisers, special events, and tours for community members and potential funders so that they are able to see the facility’s inner workings and where their money is going. Raising awareness about the organization and its services has been vital to raising more money, she said.

In the meantime, the program, unlike many other transitional housing or “housing-first” facilities, comes with a strict caveat. Veterans, also referred to as students, must adhere to the center’s zero-tolerance policy, which means they cannot use drugs or alcohol during their stay.

Like Vines, 57-year-old East Baltimore native and Army veteran Charleatha Cherry too came to MCVET after years of drug and alcohol addiction and several failed attempts to get sober.

After a devastating loss of her children in a custody dispute with an abusive partner, “I went on what I call self-destruct, meaning I didn’t care about anything,” said Cherry, who later served two stints in prison. Cherry said she sought help from a local drug and alcohol treatment program in 2012 and found a job. But after around seven months, she was back on drugs. In November 2013, Cherry visited MCVET.

“I listened to everything the intake officer had to say. He told me a lot of stuff that had to be done. It was a lot of rules. I was like, ‘This is just too much,’ but I had to think about something. ‘Where did I just come from?’ I wasn’t going back to that. I decided right then and there, whatever it took, I’m gonna do it,” she said.

But it wasn’t easy.

“I wanted to get high. I was still broken. I was still hurt. I was mad at myself for screwing up my life so bad. I didn’t think I’d make it five days,” she said.

Yet Cherry excelled, making it through the center’s emergency shelter phase, before graduating into a single room occupancy, where she lives today. The military-influenced structure, with its strict schedule, kept her on an even keel. Today, Cherry serves as the first and only female veteran on the security staff part-time. She’s back to basics, she said.

“If I hadn’t came to MCVET and cleared my mind by getting clean, there’s no way in the world I would have achieved all that I have. I have to keep the focus everyday on staying clean, one day at a time,” Cherry said.

And with the motto, “veterans helping veterans,” MCVET gives students at the facility responsibilities.

Army veteran and MCVET student Bertha Moore, who came to the center in November 2016, pays a small portion of her rent — $78 — which is based on her income. She works two part-time jobs, working for MCVET’s Code Blue program, which brings in 30 homeless women each night, offering them food, showers and services. She also referees for high school sports games in the area, which can pay anywhere from $40 to $60 a game, and helps out at the center’s laundry room, where veterans and guests can come to wash, exchange and pick out clothes.

After serving in the military in the late 1970s and early ‘80s, the New Jersey native left the army to embark on a career in social services. Healthcare came through her job, but last year, Moore, 62, fell on hard times, she said. Working and pursuing her master’s at Morgan State University full time, she was strapped for money, and eventually, Moore was evicted from her Baltimore apartment.

“I was working hard, and not making enough money. Everything collapsed as far as financially,” she said.

That fall, Moore decided to seek out help at the Department of Veterans Affairs’ Baltimore regional benefit office, where she met a man who offered to take her to MCVET.

“I just stepped out and took him on faith that he was taking me some place that I’d want to be, and he brought me here,” Moore said.

The next day, Moore said, she was given a key to her own room housed in the center, where she has lived and worked for the past year, with the goal of finishing her master’s.

For Vines, who had tried other transitional housing facilities before coming to MCVET more than a year ago, the shelter provided a place of refuge and structure she hadn’t experienced elsewhere.

“(MCVET) gets you in touch with the mental health. The alcohol was just a symptom of my problems,” said Vines, who added that the organization has linked her with case managers and health professionals in order to get her the treatment that she needs. It’s given her hope — her goal is to go to school and work within the medical field — and it’s also given her other tools to succeed.

“They don’t just throw you in the water. They give you a life jacket, a boat, a paddle, food. If you decide that you want to deflate your life raft, you can still always swim back to shore and get back to MCVET,” Vines said.

By Brittany Britto, The Baltimore Sun