By Ward Carroll It was the fall of 1968, and former Notre Dame standout Robert Patrick “Rocky” Bleier was in... 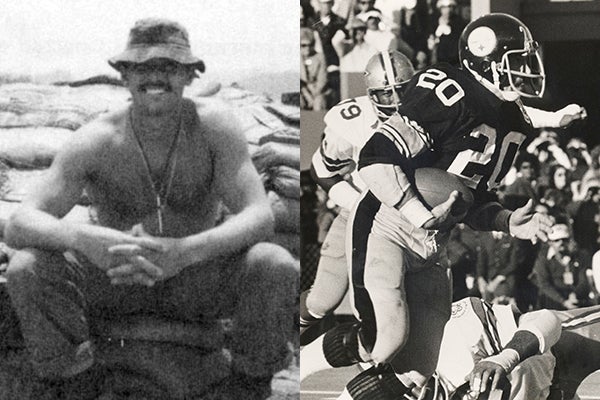 It was the fall of 1968, and former Notre Dame standout Robert Patrick “Rocky” Bleier was in the middle of his rookie NFL season, playing for the Pittsburgh Steelers. His life suddenly changed when — like many able-bodied American males at that time (but unlike most professional athletes) — Bleier was drafted into the U.S. Army.

It was a chaotic time in America. There was a presidential election going on, one that would eventually be won by Richard Nixon (who would resign in disgrace during his second term). Civil right leader Martin Luther King and presidential candidate Robert F. Kennedy had been assassinated the previous spring. Cities were burning across the country as race riots broke out. And the shadow of an increasingly unpopular war in Vietnam spread across the country.

Scores of draftees burned their draft notices in protest. Others fled to Canada. Some, including legendary boxer Muhammed Ali, chose prison over military service.

But Rocky Bleier reported for duty.

“Next thing I knew I was in basic training and my world had kind of been turned upside down,” Bleier told Fox Sports. “Then eventually I found myself in Vietnam, like all replacement soldiers at the time – shipped over because they needed bodies.”

August 20, 1969 would be the day that changed Bleier’s life more than any other. He had been in Vietnam with Company C, 4th Battalion (Light), 31st Infantry 196th Light Infantry Brigade for five months when his squad was pinned down by an enemy ambush as they attempted to cross a rice paddy. A bullet hit him in the left thigh.

“It felt like somebody punched my leg,” Bleier said. “It was the first time I’d ever been hit in my life. I didn’t know whether I could run, walk, crawl. It hurt but the adrenaline was pumping, I had gauze tied around it, then we got back to our commanding officer and the rest of the platoon finally came back in.”

But the enemy had reconstituted too. The Americans were surrounded. A  grenade bounced off his CO and exploded. The shrapnel ripped into the lower part of Bleier’s right leg and tore off part of his right foot.

As night fell soldiers from another platoon wound up dragging him out of the line of fire on a poncho. He was medevac’d and eventually wound up in an Army hospital in Tokyo with a Bronze Star and Purple Heart pinned to his pillow. His spirits were low, both because he felt like he’d let his squadmates down by leaving the fight and he feared he’d never be able to play football again.

But his mood was buoyed after one mail call brought him a post card from Art Rooney, owner of the Pittsburgh Steelers. On the back of it was scrawled “Rock, the team’s not doing well. We need you.” With that, Bleier resolved to do whatever it took to get back to playing in the NFL.

After nearly a year of multiple surgeries and rehab, Bleier was discharged from the Army. He showed up to the Steelers training camp motivated but physically short of what the team needed on the field. He was only 180 pounds and couldn’t walk without enduring a lot of pain. He spent three seasons either on injured reserve or waivers. But he never gave up.

Finally entering the 1974 season he had put on enough weight and was fit enough to earn a spot on the starting lineup. And his persistence paid off in a big way. That year was the beginning of the Steelers dynasty that included Hall of Fame players like quarterback Terry Bradshaw, running back Franco Harris, and defensive lineman “Mean” Joe Greene. That lineup wound up winning Super Bowls IX, X, XIII, and XIV.

Other combat-experienced military veterans have played in the Super Bowl — for instance, Chad Henning flew A-10s during Desert Storm before helping the Dallas Cowboys to three wins in the big game — but none of them overcame as much military-related adversity to reach the pinnacle of the sport.

Bleier credits his military experience with giving him what it took to reach his goals. But, more than that, his status allowed him to be a spokesman for his fellow Vietnam-era vets.

“People wanted to know how I felt about Vietnam, what I thought about the war, and I became a kind of poster child for all of those veterans who didn’t get the same kind of respect as they came back,” he told Fox Sports. “I was telling the story and giving a different image than one of baby-killers or derelicts or post-traumatic stress or unemployment or homelessness. It was that kind of image that needed to be changed and I got to be a part of that, of changing that image.”

Bleier noted a distinct change in the American public’s reaction toward those serving in the military after Desert Storm, an attitude that has continued, for the most part, to this day.

“It became a healing moment because a lot of Vietnam veterans had never been thanked,” he said. “And that’s all anyone ever wanted, a thank you.”

Ward Carroll is the president of Military One Click. He can be reached at ward@militaryoneclick.com.