Meet The Veteran Who is Rallying Progressives in The Military Community

Over the last two years, as the country has grappled with a contentious and difficult election, the Mueller investigation, and... 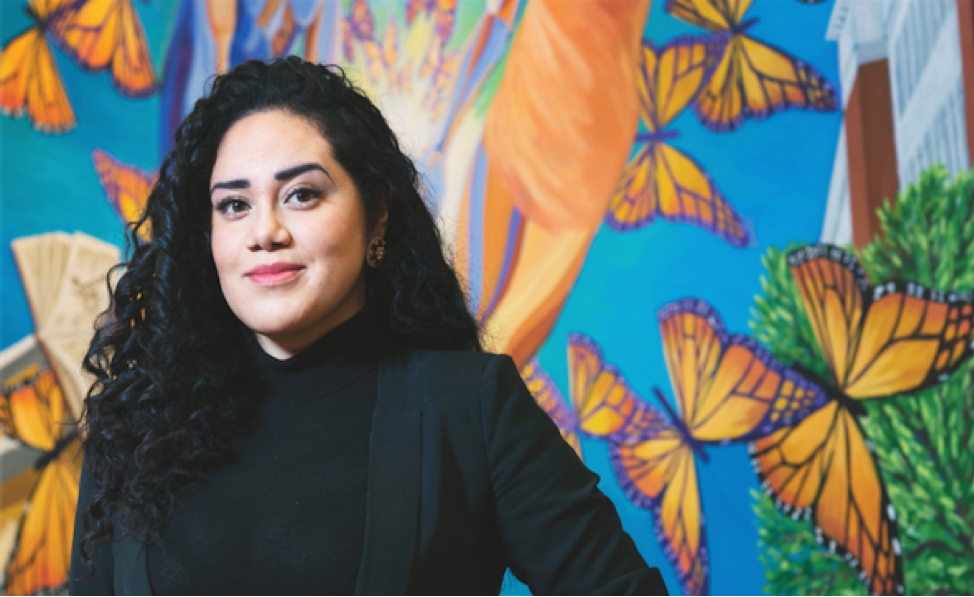 Over the last two years, as the country has grappled with a contentious and difficult election, the Mueller investigation, and subsequent fall out, veteran and military families have often found themselves represented–or misrepresented–in the political arena and media. Pam Campos-Palma, an Air Force veteran, thinks that it’s time military-connected families regain their agency, especially those who are progressives.

Campos-Palma, the Executive Director of Common Defense and Director of Veteran Strategic Initiatives for Beyond the Choir, wants military-connected progressives to mobilize and fight for more than just a military-centricagenda. “Something that is deeply damaging is saying that well, this military family only cares about the VA. We’re not so simple. And we are leaders for change,” she said during an interview with MilSpouseFest.

Common Defense and Beyond the choir are separate but linked organizations. Common Defense describes itself as a grassroots organization that vows “to protect our communities from hate and violence, to serve on the front lines for social, economic, and global justice, and to champion a truly equitable and representative democracy.” Beyond the Choir is a political strategy and training group focusing on partnering with movements and influencers to reach the broadest bases for change.

The daughter of a Honduran immigrant, Campos-Palma grew up in a suburb of Boston and lived in a “working class, blue-collar” neighborhood. “I feel that I was politicized at a young age,” she says. “I grew up seeing injustice in my community; I faced racism myself.” As a child she was pulled out of her neighborhood elementary school to join a gifted class program in a more affluent school. After she was dissuaded from college by a guidance counselor who told her she was “bound for failure,” her mother convinced her to join the military.

“My mom was the one who very, very strongly asked me to join the Air Force,” Campos-Palma says. “She felt it was a place that I could get more opportunity.” Her mother took her to the recruiter and Campos-Palma enlisted. She ended up in intelligence because it was challenging. “I thought that it would give me more opportunity,” she says.

“The Air Force gave me a chance to prove myself to myself. It allowed me to thrive as a young intel analyst, be very empowered, and very emboldened,” she says. Often the youngest and only woman of color in the room, Campos-Palma says those moments “shaped and sharpened me.”

While those who serve in the military are often cast as conservatives and Republicans, but the truth of that stereotype is murkier than many realize. “My time in the military was inherently politicized,” she says. Serving at a time when Don’t Ask, Don’t Tell and sexual assault were at the forefront, her experiences serving in a unit with toxic, misogynistic leadership, and working with women and girls in Kyrgyzstan focused her interests more clearly. “I became fascinated with people,” Campos-Palma says. “How do we organize against injustice when everything is against us?”

In fact, Campos-Palma began to organize and saw the power of community in the Air Force first. “I gained a lot of respect from all different people,” she says of that time. “I definitely was very animated by the possibility of change. I felt like it’s not as far away as you think sometimes.”

Grappling with a commission, the Airman decided to leave active duty and become a Reservist. This arrangement gave her a balance between the job she loved and more freedom. “I wanted to speak out; I wanted to get more involved politically,” she says. She worked in Oregon organizing farm workers and immigrants, became a gubernatorial appointee, and earned a Masters of Public Administration from New York University.

When then-candidate Trump won the 2016 election, Campos-Palma was more than worried. She already had an understanding of his politics. “I’d heard the Trump narrative before. I heard it when I was eight,” she says. “A lot of things that I had lived and had instincts about like racism and classism were coming to the surface of the national consciousness.”

As a progressive veteran, she began trying to understand what her role was in a new political landscape. After seeing the #VetsvsHate hashtag on Twitter, she was struck: “It was the first time that, other than my personal interactions, I had seen outwardly progressive veterans.”

For Campos-Palma, her opposition to the policies and politics of President Trump is quite simple: “I took an oath for this country and this person is an existential threat to our country and our communities and our future.” She participated in the #VetsvsHate hashtag and immediately after the 2016 election and organized more than 500 veterans to march in Washington, D.C. for the Women’s March.  Shortly after, she was invited by Beyond the Choir and Common Defense to come on full-time.

Now, more than a year later, Campos-Palma and Common Defense are leading progressives in the military community into battle on behalf of immigrants. “I’ve seen parallels between the veterans community and the immigrant community,” she says, noting that both groups are nomadic, not understood well by larger society, and often used as political footballs.

“You attack immigrants, you attack all of us,” Campos-Palma says. “When you say all immigrants need to be deported you’re talking about veterans, military spouses, and children.”

In the year ahead, she hopes to see Common Defense “carving” out space for new political voices and “agency for military-connected folks.” She hopes to see the movement grow to encompass all who have progressive values, rather than focusing on labels. The group is looking toward midterm elections as are most progressive organizations.

“We’re important messengers who know the cost of war and are not to be forgotten,” Campos-Palma says. “We can’t let the left cede military families and veterans to the right. We should have our own political voice and agency if we want to keep serving our country.”