From adolescence to beyond menopause, midwives offer a broad scope of practice tailored to women’s preference of care. At William... 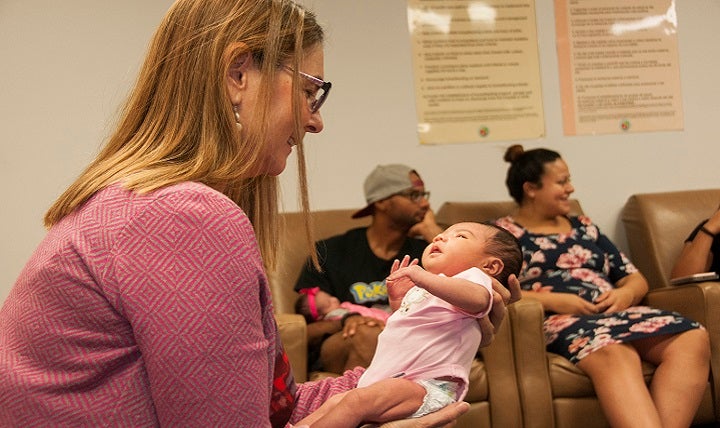 From adolescence to beyond menopause, midwives offer a broad scope of practice tailored to women’s preference of care. At William Beaumont Army Medical Center, a team of Certified Nurse-Midwives provide around-the-clock care, the only medical center in El Paso to do so, ranging from well-woman exams to postpartum care.

“I love being a nurse and being a midwife,” said Army Maj. Noelle Dove, nurse midwife, Department of Women’s Health Services, WBAMC. “(Being a midwife) is about being able to offer more to the patient and increasing the opportunities that (CNMs) can be involved in.”

According to the American College of Nurse-Midwives, in 2014, 8.3 percent of all U.S. births were delivered by CNMs. Furthermore, statistics show a steady rise in CNM-attended births in the U.S. since 1989.

The growth in opting for CNM-attended births may be attributed to CNMs’ commitment to evidence-based practices which continuously introduces options for women not just during labor but also within their primary care practice.

“Women’s bodies are pretty amazing,” said Army Capt. Merry Fontenot, nurse midwife, WBAMC. “As midwives, which means ‘with women,’ we also provide our patients the tools to make decisions. We don’t make the decision for them on a regular basis; we empower them to make the best decision for themselves.”

While some patients may not be familiar with the profession, CNMs and Obstetrician-Gynecologists do have a shared goal of promoting safe women’s health through evidence-based models. Such evidence-based models are a staple at WBAMC’s Labor & Delivery Unit where CNMs have introduced a variety of modalities to broaden women’s options during labor such as hydrotherapy, wireless monitoring and are currently looking into other alternative pain management techniques such as Nitrous Oxide, better known as laughing gas.

“Labor can be a long process and sometimes women need all sorts of options to get them through it,” said Dove. “We’re going to let women go on and have their babies in the way that their bodies and babies are dictating and sometimes that could take a couple of days. So offering (nitrous oxide) can get them through the pain of labor in the early and late stages and starts working in a few minutes and can stop working in a few minutes.”

“The actual practice of midwifery extends back to the beginning of time,” said Valerie Miller, nurse midwife, WBAMC. “It’s a practice that has an amazing culture of promoting women having their babies in a safe way and a way they want to do it.”

“We do a lot of education and provide good quality care to our patients while letting them own their own experience,” said Fontenot. “It’s really their choice how they want their care. If they do or don’t want a medicated labor, we’re there with them. We’ll be there while they’re breathing and laboring through the pain if that’s the experience they want. It’s their choice and we’re there to support them and allow them to make the best decision for themselves, it’s their time.”

WBAMC’s group prenatal care sessions are where first-time mom, Susan Molina, was introduced to the profession.

“This is my first experience with a midwife and I didn’t expect it to be so awesome,” said Molina, a military spouse whose daughter, Veronica, was delivered at WBAMC on Sept. 19, 2017. “The experience was definitely more personal and felt like a closer connection.”

According to Molina, the midwife care she experienced made her pregnancy and labor easier. So much so, during labor Molina was nervous and anxious but felt relieved once Miller, the midwife on duty, came into the room before delivering her baby.

While WBAMC midwives focus on OB care, they are capable of providing well-women exams, gynecologic, family planning and menopausal care.