What happens when you have a handful of military spouses and veterans angry over the Murray-Ryan Bill and the... 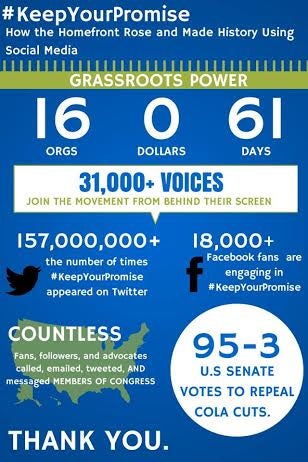 What happens when you have a handful of military spouses and veterans angry over the Murray-Ryan Bill and the Bipartisan Budget Act that stripped away the Military Retirement Cost of Living Allowance without warning? They fight back by deploying a social media grassroots campaign that reaches over 25 million people (with no money spent) and THEY WIN!

The Murray-Ryan Bill and the Bipartisan Budget Act 2013 were passed with the devastating cut to Military COLA included, though no input was received from the Department of Defense, The Military Compensation and Retirement Modernization Board, the House Armed Services Committee, or the U.S. Senate Armed Services Committee. “How could they cut this earned compensation without even asking one member of the military community?” asks Jennifer Pilcher, Founder of MilitaryOneClick.com and one of the Co-Founders of #KeepYourPromise. With only a few days before the bill would go before the Senate for a vote and no money to spend on this grassroots movement, they launched their first Twitter Town Hall meeting on December 16, 2013. A few days later, Jeremy Hilton, a veteran, military spouse and co-founder of #KeepYourPromise, appeared on Fox News, saying “…Most of our men and women in uniform don’t typically speak out politically so it leaves it up to us military families, the spouses and moms and dads of our service members, to speak out for them. We don’t have a union, all we have is our faith in the American people — and the more they hear about this budget deal, the more they will think this shouldn’t happen and we should figure out a way to fix it.” A few days later, the Murray-Ryan bill passed anyway and was headed to the Senate for final passage of the Bipartisan Budget Act.

Still, the #KeepYourPromise Alliance refused to waive the white flag.

According to Lori Volkman, Co-Founder of #KeepYourPromise, “With zero dollars, the effort was managed between jobs and child-rearing by military spouses with experience on how to get the word out about military families: a journalist, a social media professional, a communications professional, a lawyer, an advocate with legislative experience, and several marketing experts. We were determined to urge Congress to #KeepYourPromise.”

The #KeepYourPromise Alliance soon gained additional allies in a multi-media assault on Congress and grew to over 16 military family organizations, military spouse-owned small businesses, veterans and concerned Americans who lent their energy and names to the movement. As Co-Founder of #KeepYouPromise Adrianna Domingos-Lupher, who helped orchestrate and run the social media campaigns, reported, “The #KeepYourPromise Alliance reached over 25 million people on Twitter and more than 18,000 extremely active supporters on Facebook. We leveraged social media to effectively mobilize hundreds of thousands of veterans, military spouses and Americans to call, email, and meet with their elected local officials urging them to ‘keep your promise’ to military families.” With specific media support from Hugh Hewitt, Megyn Kelly, Fox and Friends, Jake Tapper and help from key members of Congress — Senator Kelly Ayotte from New Hampshire, Senator Lindsey Graham of South Carolina, and Congressman Tom Cotton of Arkansas — the #KeepYourPromise message was heard loud and clear.

On February 12, 2014, under tremendous pressure from the military community, Congress overwhelmingly voted 95-3 to repeal the COLA cut for all military members who joined prior to January 1, 2014. President Obama signed the repeal into law on the 14th of February.

But everyone involved knows that the fight isn’t over. According to Pilcher, “My family, as well as the military community, is extremely worried about what’s next. This is the reason millions of service members, spouses, veterans and Americans have now joined the #KeepYourPromise Alliance and will continue to urge Congress to keep their promise on all military and Veteran issues. ”