MilitaryOneClick Grades “Here Comes the Boom” an A+ 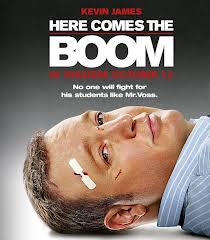 MilitaryOneClick attended a premiere screening of the new movie, “Here Comes the Boom,” starring Kevin James, Henry Winkler and Selma Hayak premiering Friday, October 12, 2012. “Here Comes the Boom” is a comedy featuring Kevin James playing Mr. Scott Voss, an unmotivated high school biology teacher in a school with financial problems forced to cut the music program. Mr. Voss finds inspiration to save the music program while listening to students perform during music class taught by Mr. Marty Streb, played brilliantly by Henry Winkler. When left with no options and no other faculty members to help, Mr. Voss devises a plan to raise the money by participating in ultimate fighting cage matches after school. With no fighting experience, except collegiate wrestling, the 42 year old Voss enlists the help of Marty the music teacher and Nikko, played by Bas Rutten, as his trainer. Mr. Voss (Kevin James) is the out of shape, king of one-liners, while Nikko represents the rock solid former fighter now turned yoga instructor revealing his soft side, along with Marty (Henry Winkler) constantly displaying his awkward tendencies, proving that opposites do attract. The combination of these three talented comedians playing off each other, steals the show.

Henry Winkler best known for being the coolest character on the block as “Fonzie,” plays the complete opposite of his iconic character, as the lovable nerdy music teacher, Mr. Streb.  Jeanne Saum, Director of Community for MilitaryOneClick who attended the screening commented, “just when you thought Henry Winkler as the “Fonz” couldn’t make any character cooler, Winkler transforms Marty the “music geek” into the “new cool” of this generation.  He nailed it”.

Families will laugh until they cry with the hilarious events that unfold as the characters take the audience with them on this wild ride. The ultimate fighting scenes are so intense and realistic, the audience was sitting on the edge of their seat wincing in pain for Voss as he was brutalized with punches and kicks to every part of his body.

Throughout the movie you will be wondering if Voss can win the fight to save the music program or be knocked out for good?

The physical comedy along with the bantering dialogue is performed perfectly by the orchestra of talented actors in this film. In addition to James, Winkler and Rutten, Selma Hayek as nurse Bella Flores, Greg Gorman as Principal Betcher, Joe Rogan, as himself, and Gary Valentine as Eric Voss completes the picture. The stars of this dynamic cast also include real Ultimate Fighting Challenge athletes and the students, who are not actors, but true musicians, attending a high school outside of Boston.

This is an inspirational movie with an incredible message portrayed through comedic genius.  MilitaryOneClick grades “Here Comes The Boom” class-act cast straight A students!

Recent tweets from the cast:  Bas Rutten (@BasRuttenMMA)
10/12/12 5:25 PM
@military1click yeahhh! Nice one. I’m gonna RT it, my fans are getting nuts from me, sorry, just very excited!