Nikki Haley, the governor of South Carolina and the spouse of a National Guardsman, has been nominated by President-elect Donald... 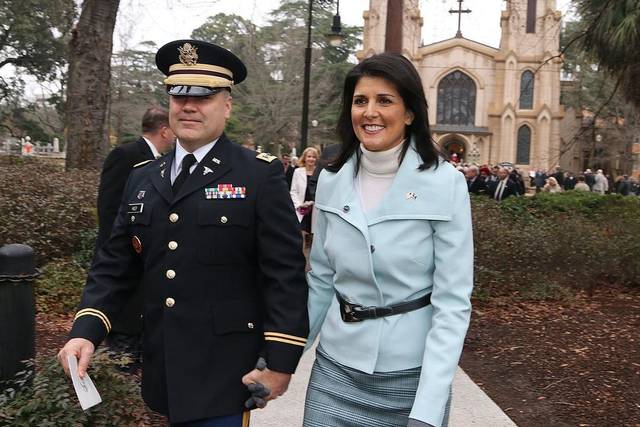 Nikki Haley, the governor of South Carolina and the spouse of a National Guardsman, has been nominated by President-elect Donald Trump to be the next United States Ambassador to the United Nations, the transition team announced.

Trump’s pick of Haley is surprising to many political observers considering how vocal she was with her opposition toward his candidacy during the presidential campaign. She initially backed Marco Rubio, and once he dropped out, she supported Ted Cruz.

Last February, Haley said Trump was, “everything a governor doesn’t want in a president.”

A few weeks later, Trump posted this to Twitter:

The people of South Carolina are embarrassed by Nikki Haley!

But now all of that appears to be behind them.

Immediately following Trump’s election, Haley said, “I’m just giddy, and if you talk to any of the governors here, we are so excited at the possibility and the opportunities that are going to be here.”

And in response to her nomination, Haley said, “When the President believes you have a major contribution to make to the welfare of our nation, and to our nation’s standing in the world, that is a calling that is important to heed,” according to a report at CNN.com.

Haley’s husband, Michael, is a captain in the South Carolina National Guard. His last major deployment was to Afghanistan in 2013, where he served in Helmand Province as part of an Agribusiness Development Team that tried to get Afghan farmers to improve their farming techniques and stop growing poppies used to make heroin. He is the only First Gentleman of a state to serve on active duty in a war zone.