A U.S. Navy spouse and Air Force veteran August 13 became the 1,767 person ever to complete a swim of the English Channel when... 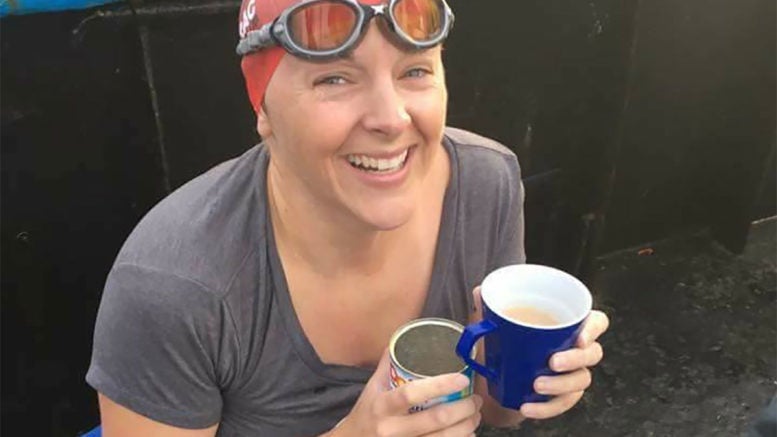 A U.S. Navy spouse and Air Force veteran August 13 became the 1,767 person ever to complete a swim of the English Channel when she finished her swim in 14 hours, 41 minutes.

Amy Hayes, who lives at RAF Molesworth with her husband and four kids, has been training for the swim for two years. An initial attempt in July was shelved when weather conditions made it impossible.

Hayes, who has been a swimmer off and on since competing on a swim team in high school, decided to tackle the English Channel after taking a trip to Dover, England, with her husband shortly after PCSingto the region.

“We could see France, and I was like ‘I think I want to swim to there,’” she said. “I thought swimming all the way over there and then climbing on the the beach on the other side, that has to be the ultimate finish line feeling.”

Swimming the English Channel is not something tackled lightly. An association logs those who have completed the 21 mile swim, considered by many to be the ultimate long distance swim challenge.

With large vessel traffic, sea life threats including jelly fish and a temperature of around 60 degrees in the summer, the route takes, on average, just under 14 hours of near continuous swimming to complete. Swimmers must use a guide boat to make sure they are safe. To be an official finisher, swimmers cannot wear a wet suit or any other clothing that gives buoyancy or receive any physical help during the swim, other than to have items like food handed to him or her in the water.

Speaking to me just two days after her swim, Hayes said she was just starting to recover physically. Her right shoulder had started hurting just a few hours into her swim, and became excruciating around hour 12. She was ultimately able to push through the pain and the challenge of the changing tide.

Amy Hayes after her swim (Photo: Courtesy of Amy Hayes)

“It just kept going through my head how much time and energy and money I had put into it,” she said.

She was also stung by jellyfish over 30 times during the swim, including once after accidentally swimming straight into the bottom of one. That jelly stuck to her face, head, neck and arm pits, she said.

Hayes, who admits she is a junky for finish lines, said that doing hard things is about more than just the challenge in the moment. She said teaching herself to overcome tough physical challenges has helped her roll with the punches of military life. She also hopes it helps her get through tough life stuff later.

“You can do really hard things, and when you achieve those goals you can say ‘I did that, so I can probably do anything,’” she said. “When the hard things in life that I don’t choose come along, I’ll be better equipped.”

The two years Hayes spent getting ready included many open water, six hour swims, time in the indoor pool and all but full-time training. Previously a stay-at-home mom, she put her two children who were not yet in school in childcare so she could focus on training. Daily time in the pool or river, including winter swims in near-freezing water, and gaining 20 lbs for extra natural buoyancy and insulation were all a part of her prepartion.

Swimming the Channel is also not cheap. Childcare so she could train, the cost of the guide boat, registration, travel, hotel, training and more has put the cost to over $25,000 over the two years of work, Hayes said. Although most of the money came out of pocket, she did some fundraising through Go Fund Me for her swim and a charity, Cadence International, that serves military families.

Hayes said she is a little embarrassed about the price tag. She initially estimated that costs would be much lower, and at some point she had spent so much on the endeavor that it felt too late to back out. But she is still glad that she did it, and is ready to move on to the next task, whatever that might be.