In the days since the Route 91 Harvest Festival shooting, the Nellis Air Force Base and Las Vegas communities have... 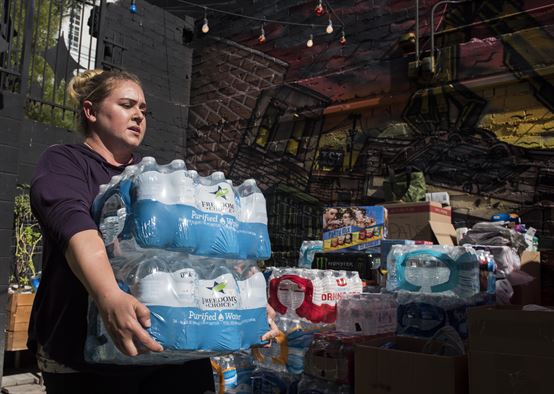 In the days since the Route 91 Harvest Festival shooting, the Nellis Air Force Base and Las Vegas communities have found strength in unified actions to rebuild hope.

As Las Vegas moves toward a state of recovery, Nellis AFB spouses are combining efforts to provide for the needs of community volunteers, displaced family members and hospital staff.

“It feels nice to have something to be happy about in such a tragedy,” said Shannon Janelle, mother of two and wife of Staff Sgt. Jeffrey Janelle, an instructor assigned to the Nellis AFB First Term Airman Center. “It’s nice to know you can lean on the people around you when something like this happens.”

Nellis AFB has been the only duty station for the Janelles in a 10-year career. Naturally, when disaster hit Oct. 1, 2017, they joined with neighbors and community businesses to shuttle items downtown.

“I don’t really have anything to donate, but I do have a car and gasoline,” said Shannon to her community of spouses. “So, if you have it, I’ll take it.”

Shannon teamed with more than 30 spouses, friends and families to collect donated items for those at Sunrise Hospital, the University Medical Center of Southern Nevada, the Las Vegas Convention Center and the Las Vegas fire and police departments.

With an outpouring response from the community, Shannon transformed her home into a drop-off location, where volunteers could pick up items for distribution.

“Within an hour of requesting help, it started to snowball and became huge,” said Shannon. “We were taking in so much stuff, our cars couldn’t hold it all. We collected anything that could keep people moving forward and help them get through the next week.”

Military spouse Lauren Stephens played an integral role in the distribution of collected drinks, snacks, blankets, clothing and toiletries as well as adding some home cooking to the mix.

“I was starting to get antsy after the hurricanes – feeling guilty and helpless that I couldn’t help,” said Lauren, mother of twin boys and wife of Tech. Sgt. Alex Stephens, 58th Rescue Squadron pararescueman. “So, I have made soup, baked cookies and other baked goods for the folks at UMC.”

“We’re used to picking up where there’s slack or when there’s a need,” said Shannon. “So, if there’s a need, we fill it because we know what it feels like to not hear from your loved ones and not know what’s going on in tragedy and loss.”

As the Las Vegas community heals, the Nellis AFB community will continue to provide support to Airmen, families and the community in any ways it can.

By US Air Force photo by Senior Airman Kevin Tanenbaum