By Oriana Pawlyk, Military.com Female airmen now have up to 12 months after having a baby to request separation from... 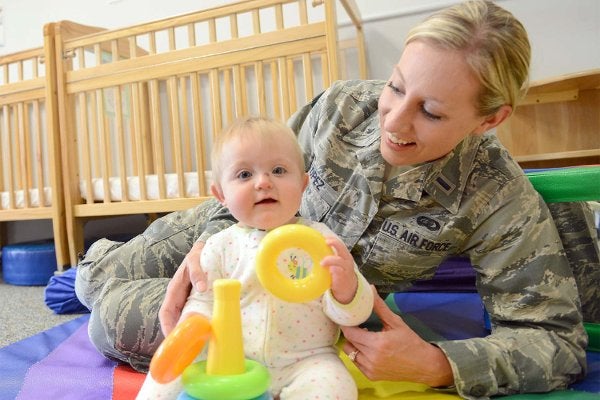 Female airmen now have up to 12 months after having a baby to request separation from the Air Force.

That change, which recently took effect, is designed to give new moms more time to determine how — and whether — they want to balance a military career and a family.

It’s one of more than a dozen initiatives the service is rolling out to attract and retain a more diverse group of airmen. The changes were recently detailed in a memo, “Diversity & Inclusion Implementation Guidance.”

“How do we get [airmen] and keep them [in assignments] that don’t quite have that diversity?” Air Force spokeswoman Brooke Brzozowske said of the effort to Military.com on Wednesday.

New mothers in the Air Force previously had to decide whether to stay in the service before giving birth. The idea behind the updated policy is to give them more time to come to a decision after adjusting to their changed circumstances.

In a separate but related policy change, the Defense Department last year set maternity leave across all branches of the military at 12 weeks. The move doubled the Army and Air Force’s six-week policies, but dialed back a generous 18-week leave policy previously rolled out by the Navy and Marine Corps.

“This is just a better way to make sure that we’re not losing people because we’re separating families,” Brzozowske said. “But we do this really well already.”

Assignment teams will try to accommodate dual spouse requests to the “fullest extent practicable while balancing mission requirements,” regardless if they are enlisted or officer, the guidance said. Any new joint spouse assignment policy requirements will begin this fall.

Overall, the policy changes are designed to entice more airmen into parts of the Air Force that are demographically underrepresented.

For example, in the the remotely piloted aircraft, or RPA, field — on track to expand in coming years — only 6 percent of members are female and 15 percent are minorities, according to the Air Force guidance. By comparison, women make up 19 percent of the active-duty Air Force and minorities represent 28 percent of the force, according to a 2015 report from the Defense Department.

While the service isn’t looking to change selection standards for any career fields, it does hope to encourage more women and minorities to apply for jobs that often draw from the same applicant pool.

The Air Force aims to do so in part by including a qualified female and/or minority candidate in certain developmental positions, such as executive officer, aide de camp, military assistant, senior enlisted adviser, career field manager, and Commander’s Action Group chief — all of which require a formal interview.

“This is kind of similar to the Rooney Rule in football,” Brzozowske said, referring to a rule adopted by the National Football League in 2003 so minority candidates would be interviewed and considered for senior positions, such as head coaching jobs.

The service also plans to ensure diverse development teams or command screening boards, which determine whether an enlisted airman or officer is approved for a promotion or new assignment.

“A team of individuals within your career field and other career fields are going to look at you” for promotion, Brzozowske said.

Officials are “looking at making it as inclusive as possible,” she said. This could include having a Guard or Reserve member join the panel from “different backgrounds, different languages, gender … all of it.”

The service also wants to broaden its recruitment efforts — which draw a significant number of prospects from states such as California, Texas, North Carolina and Virginia — in part by using new tools to target additional markets.

Recruiters and officials from the Air Force, Guard and Reserve, as well as the Air Force Academy and Reserve Officers’ Training Corps, will be encouraged to build more detailed portfolios using government databases to cover new neighborhoods, regions and schools across the across the U.S.

“Beginning in fiscal year 2018, Air Force recruiters will be provided with additional tools and resources that will allow them to identify and target a geographically diverse set of communities for new recruits,” the guidance says.

And if the Air Force is going to grow and pull from diverse communities, the people doing the recruiting must mirror that diversity.