By Master Sgt. Raymond Drumsta, New York National Guard It was another day and another conspicuous venue for members of... 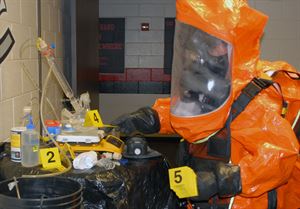 It was another day and another conspicuous venue for members of the New York National Guard’s 2nd Civil Support Team as they trained to track down and identify hazards at Joseph L. Bruno Stadium here on April 12.

About a dozen members of the 2nd Civil Support Team (CST) participated in the training exercise, which was based on scenario involving a clandestine WMD laboratory at the stadium. Team members are trained to identify chemical, biological, and radiological agents and advise first-responders on how to deal with these materials.

Training at the minor-league baseball stadium is right in line with their mission, said the 2nd CST Commander, Lt.Col. Aron Sacchetti, of Nassau, N.Y.

Unfortunately, terrorists target such places in order to cause many casualties and incite wide-spread terror, he explained.

“We try to conduct training in public venues where there are likely to be large gatherings of people,” he said. “This gives us familiarity with the venue beforehand, and familiarity with security personnel at those places.”

According to the training scenario, stadium security personnel who discovered the lab began exhibiting signs of sulfur-mustard agent exposure, including runny noses irritated throats and other respiratory symptoms, Sacchetti said. The team’s mission was to identify any hazards, then recommend mitigation measures and all other precautions to the incident commander, he explained.

Driving several vehicles – including the 2nd CST’s mobile laboratory, called the Analytical Laboratory System (ALS) — team members arrived at the stadium at about 10 a.m. and set up communications equipment, hazardous-materials detectors and other gear.

“We know when we’re going in, we’re facing something hazardous,” Sacchetti stressed. “But we’re equipped to handle those situations.”

After finding the mock laboratory, Rodriguez and Spagnola began the painstaking process of identifying hazardous materials, tagging them with evidence markers, photographing each one, photographing the entire scene, categorizing hazards and collecting samples. Stocked with many simulated hazardous materials and other chemical-processing equipment, the mock laboratory was designed to challenge the team members’ abilities.

Team members work from general to specific, Fredericks said, first determining if a substance is a hazard, then attempting to identify what it is. Sometimes substances might simply be ingredients used in the making of WMDs, which are called “pre-cursor chemicals,” he explained.

“That chemical may be only used to make one thing in the WMD realm,” he said. Team members are trained to use dozen of different technologies – from electronic devices to Ph. paper – to detect and identify hazardous materials, Fredericks stressed.

But while the training venue was a ballpark, the 2nd CST doesn’t work in ballpark figures, so they used the ALS to test the samples further.

The ALS can analyze chemical warfare agents, toxic industrial materials, toxic industrial chemicals and biological warfare agents, according to an Army fact sheet. The ALS provides detection and identification capabilities to the CSTs to conduct analysis of unknown or potential agents at an incident site and transmit that information electronically in support of the first-responder incident commander.

“By collecting a sample and conducting more testing, we’re able to confirm what it is,” Sacchetti said. Team members completed the mission by 12 p.m., he added.

The 2nd CST conducts collective training like about once a month, often with first responders, Sacchetti said. “We try and incorporate our civilian counterparts as often as possible,” he said. The 2nd CST is based at Stratton Air National Guard Base in Scotia, N.Y. From that location, the team can deploy throughout upstate New York or the northeast.

The 2nd CST routinely sends teams to be on-call during major events that could be targets of an attack, like the Watkins Glen races, the U.S. Open, the opening of the United Nations General Assembly and the World Series.