How many artillery rounds did it take for a New York National Guard artillery battalion to help win World War... 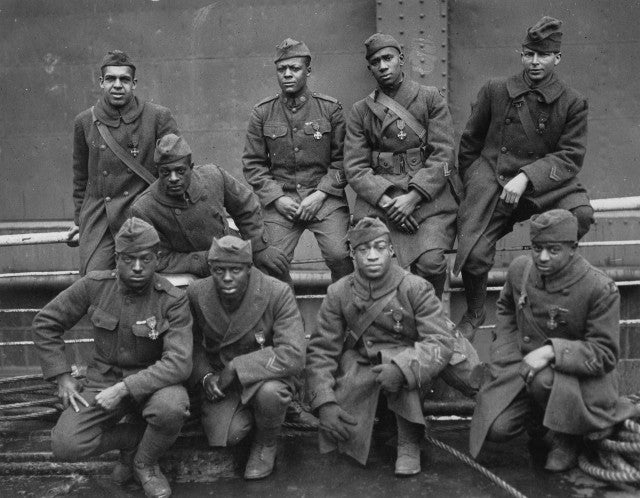 How many artillery rounds did it take for a New York National Guard artillery battalion to help win World War II?

According to 93-year-old Charlie Brown, a WWII veteran of the 258th Field Artillery Battalion, the answer is 33,902.

That’s the number of rounds Brown and his unit fired during ten months in combat from the Normandy Beaches in July 1944 to the heart of Germany in May 1945.

Brown, from Olean, New York, visited the New York State Military Museum in Saratoga Springs November 20, 2017 to meet with museum director Courtney Burns and current 258th Field Artillery members to discuss his experiences and display a collection of artifacts and details about his service in the war.

Brown, a 19-year old private first class who served in the battalion headquarters battery, kept detailed notes and records in a diary.

Brown’s service included five European battle stars for the battalion’s 302 days in combat and the crossing of nine rivers on his path from Utah Beach in Normandy on his way toward Berlin.

His original documents and details about the movement and combat operations of the 258th Field Artillery shed new light on the experiences of a New York Soldier in WWII.

Brown shared his copy of the original letter to allied troops for the invasion of Normandy, his notes regarding the battalion’s movements and combat actions, and a captured Hitler youth flag during the unit’s drive toward Berlin.

“It’s a tremendous resource,” said Burns, the museum director. “Not only the documents that he has brought but the stories that he’s bringing with them, so we’re going to be able to conduct an oral history interview with him and have him actually explain what all this stuff is, so that it’ll be available for future researchers.”

Brown took time to discuss his experiences and share unique documents, photos and artifacts of his service with the modern descendants of the battalion, Lt. Col. Peter Mehling and Capt. Steven Kerr, the commander and operations officer of the New York Army National Guard’s 1st Battalion, 258th Field Artillery, based in New York City.

“The photographs of the batteries in action are especially important since so few for this unit exist,” Burns said. “Not only is this great documentation for the unit, for which we have little material available for this period, Mr. Brown’s clear recollection and vivid stories provide an additional level of meaning and significance.”

When the battalion broke out from the Normandy beachhead in the summer of 1944, Brown kept notes showing how many miles the battalion advanced each day and the number and type of artillery rounds fired.

“The maps and overlays presented are priceless,” Mehling said after looking over the battalion’s movements through Europe. “Those documents convey with complete detail how the battalion fought from Normandy to Magdeburg. This data and level of detail simply does not exist for many units.”

The 258th would go on to serve in the Hurtgen Forest and the Battle of the Bulge before their drive into Germany took the battalion to the Elbe River.

“That’s one thing about the 258th Field Artillery — we weren’t backing up for anybody,” Brown joked with the modern day Soldiers. “We may have gone sideways once or twice, but never backwards.”

What does Brown consider among his most important artifacts? A simple two-dollar bill.

“I had a two-dollar bill, and every country I was in, I’d pull it out and write it down,” Brown explained. “Starting in Scotland, then Wales, then England and on into France, Belgium, Holland and finally Germany. So this two-dollar bill has got all sorts of dirt on it from pulling it out of my pocket everywhere I went,” he said.

“The more things change, the more they stay the same,” Mehling said. “For my service in Iraq and my Soldiers, it’s remarkable how the American Soldier is an American Soldier no matter what country, what decade.”

“It has been haunting him not knowing what might happen to all this material, to all this information, when he’s gone,” Drouin said. That led Drouin to contact the military museum and Courtney Burns to schedule an oral history and review of Brown’s information for future archiving.

Brown’s documents, overlays and data not only add to the museum collection, but bring life to the WWII narrative of the 258th Field Artillery and its own unit history, Mehling said.

“Units build esprit de corps by their understanding of where their unit has been and the challenges they have overcome,” Mehling said. “Perhaps most importantly at the individual Soldier level, it gives them a sense of their place in history. It tells them just how much what they are doing matters to our country. In passing this on, Charlie is still serving our country.”

Charlie Brown was born in August, 1924, in Delavan, New York, near Buffalo. He graduated from high school on June 26, 1943, and was drafted into service that summer.

Following basic training at Fort Bragg, North Carolina, where he was taught communications and fire direction skills, Brown joined the 258th Field Artillery and boarded a troopship for Europe in January 1944. The battalion arrived in Normandy on July 1st and 2nd in 1944 and served as part of

“The names change, the uniform and the equipment changes, but the Soldiers just stay the same all the time. It’s amazing,” Mehling said.