A new commissary pilot program is giving shoppers the option of bagging their own groceries at certain lanes instead of using the... 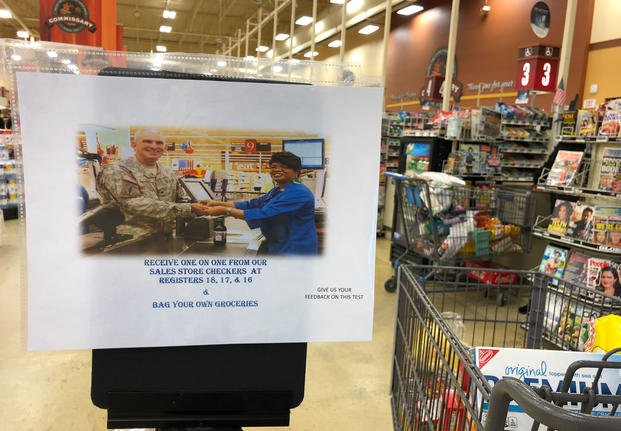 A new commissary pilot program is giving shoppers the option of bagging their own groceries at certain lanes instead of using the services of a works-for-tips-only bagger.

In the past shoppers at the commissary’s more than 200 stores could use a self-checkout lane to scan, process and bag their own groceries, or one of the full service lanes where a commissary employee processes the order and a bagger is available to move the items from the belt to the cart and car.

Shoppers at full-service lanes can ask to bag their own groceries, but doing so means telling the bagger to step aside, an interaction that can be uncomfortable.

Baggers are not commissary employees and work for tips only. That means while it’s not required to pay them for their service, it is customary.

Now commissary officials said they are testing self-service bagging lanes at about 121 of the system’s stores. Those lanes will provide a commissary employee to perform the checkout process, while the shopper will be expected to bag his or her own groceries.

The option was added thanks to customer feedback and was rolled out in late January, commissary officials told Military.com.

It was not immediately clear how long the pilot program will run.

Commissary baggers have always worked for tips-only, according to this history. In 1978 Congress even passed a measure specifically exempting them from being government employees. In 1997 commissary baggers sued, asking to be made employees and paid wages.

That lawsuit was ultimately dropped, and the Defense Commissary Agency hung signs notifying shoppers that the baggers work only for tips.

How much a bagger should be tipped per order is a constant source of debate in the military community. Some shoppers say they pay depending on how large their order is, others say they pay $5 each time, and other say they pay a flat rate of $2 to $3 regardless of order size.