ToAnh Tran was a flight attendant for a decade when her husband was given orders for Japan. Like many military... 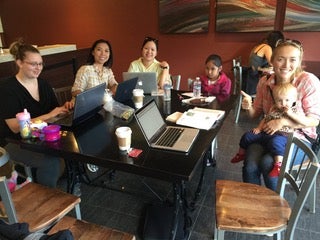 ToAnh Tran was a flight attendant for a decade when her husband was given orders for Japan. Like many military spouses, she had to make a choice: Make it work or leave her job. For a bit, she made it work– commuting from Japan to Los Angeles in order to stay in her career. Tran says that while it sounds “bananas,” many in the industry make the commute, even though she would “never recommend anyone doing that.  After a time, it was too much. “It was very, very bad,” she says. “It didn’t work out for our family.”

Again, like so many other military spouses, she decided to forgo her career and take some time off. “After a month, I was bored and severely depressed. It was just a strange thing to not work,” she says of the time following her departure. And like so many other military spouses, she began looking for a career that would follow her no matter where she went. She was unable to secure a job on base; online, the remote work that she found, she wasn’t qualified for.

So she decided to learn those skills so she could qualify. She hunted down free tutorials and spent time learning how to code on her own, in an area with few resources for a burgeoning techie who wanted to learn how to code for a living. “I didn’t know if I was good or I was bad, or what level work I should be at. I didn’t have anyone to ask question to,” she says of that time.

But she kept learning because she was enjoying the process. It was fun, she said. Soon, she was applying to two different camps: One in San Francisco, the other in Costa Rico. No way would she make it into either, she thought, but she wanted to try anyway.

She was accepted to both programs. She was shocked: She had no formal tech background and had just been “fiddling”–her words– on her own. When she attended the camp in Costa Rico, she realized why she had been chosen. “It’s really not about your background, it’s about your desire. Are you going to work hard for it?”

The Costa Rican tech camp lit a fire. While she wasn’t the most advanced student (“It was nice to see where I wanted to be, but I wasn’t there yet”), she had the tenacity to learn more. For the next year, she “built and learned and played around.”

Back in Japan, she happened to mention to another military spouse about coding– the only other person she knew who was interested in the same subject. The commisserated: What if they could find other people to talk about technology and coding?

That question led to  Tran founding Milspouse Coders, a group dedicated to helping military spouses and family members learn portable tech skills. The Navy wife wants to see more military spouses get into the space noting that, “tech is something that people always like, want, use, and need.”

The organization, built on a pay-it-forward model asks military spouses of all skill levels and abilities to participate. Launching in-person chapters this past summer, Tran envisions a time when a chapter is active on every base with spouses who are able to refer each other for tech jobs, teach each other, and support each other in the specialized field.

“We have a really good mix of absolute beginners and people who are experienced. We want to match them up and help people learn skills faster and get jobs quicker,” Tran says. She notes that military spouses are already set up with many soft skills that make them perfect for the tech industry, including problem solving and being able to adapt and accommodate for changing circumstances. “You just have to learn the skills and formatting order” to transition to the field of technology, she says.

For those without an in-person chapter, there are also online resources, including a private social media channel, called Slack, and a closed Facebook group. In addition, the organization has also partnered with other organizations like Operation Code, a veteran-run, non-profit that teaches veterans how to code. The collaboration makes scholarship money available for members of military families interested in boot camps, conferences, and online communities.

To expand, the group is currently looking for more chapter leaders. “You don’t need to have a technical background,” she says. “You just have to have the desire to be a leader in your community.” Currently, Milspouse Coders has five chapter leaders with the hopes to launch three more in-person meet ups in 2018.