By Janine Stange Ray Chavez is the oldest known living Pearl Harbor survivor, and he just turned 105. What did... 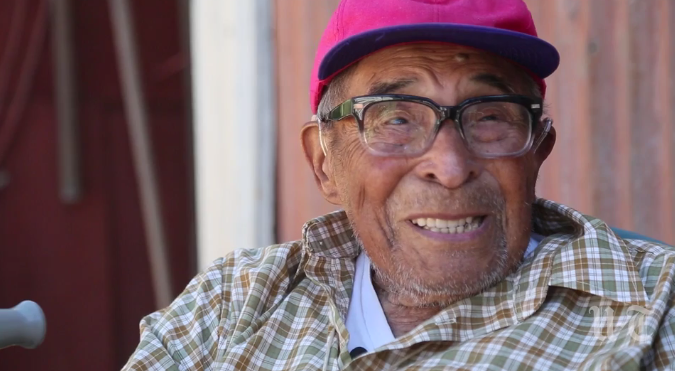 What did the retired Navy reservist living in a suburb of San Diego, CA do on such a momentous occasion? He hit the gym (and ate some cake).

Ties to the first shot fired in WWII

On the evening of December 6th – Chavez and his crew embarked on their routine sweep of the harbor aboard fishing boat turned minesweeper, USS Condor. Shortly before daybreak, they spotted a white wake, reported the sighting to the USS Ward, and finished their shift. That wake was from the periscope of a hostile submarine. This led to the first shot fired by America in WWII.

Unaware of the discovery, Chavez arrived home exhausted from his shift, he skipped breakfast and went to bed. Ten minutes later, he heard his wife screaming.

Everything was on fire. They were under attack.

“I went out and saw the fire, all black smoke from the oil from the ships burning. It was dark. Black dark. I felt terrible. To see all those ships on fire and the men struggling to keep alive in the oily water.” he said in an interview with the History Channel. “Tears came to my eyes because of the destruction of the ships and more importantly the lives that were lost. I never will forget it.”

He threw his clothes back on and started running towards base. He stayed on duty for nine straight days without any contact with his family.

Hardship after the War

Chavez retired from the Navy in 1945. It took three months for his body to stop trembling from the mental toll the war had on him. Years later, would find himself dealing with yet more horror.  His only daughter, son-in-law, and granddaughter were killed in an automobile accident.

Amidst their grief, wife Peggy suggested they adopt to fill their void. “They went to the adoption agency and asked them if they could find an older child, not a baby…” says Kathleen, of her adoptive parents in an interview with History.com, “so they came up with me, and I was 5 years old at the time. That’s how they got me and I got them.”

Adopted daughter, now 65, is also retired Navy. She served as a jet engine mechanic for 20 years, and now happily serves as her father’s caretaker and travel buddy.

Chavez is one active centenarian. He also is agile – and dedicated to staying that way.  Five years ago, Chavez sought the help of a personal trainer at his local gym Personally Fit Gym, in San Bernardino. He trains twice a week. “I tell my clients all the time, when they say, ‘I’m too old to do this or that,’ I say, ‘No, look at Ray, that excuse doesn’t fly anymore,'” Chavez’s trainer, Sean Thompson, says of his client’s dedication in an interview last year with NBC News.

Chavez visits schools, community centers, attends church and veterans events, threw out the first pitch for a Padres Game (for which he trained for weeks) and has made a number of trips to Pearl Harbor including the 75th anniversary on December 7, 2016.

While he recently he told the San Diego Tribune that he considered his 105th birthday as ‘just another day,’ others do not deem it as such. The company of ‘others’ includes four past presidents (all of whom sent birthday cards, as well): George H. W. Bush, George W. Bush, Bill Clinton, Jimmy Carter, and GOP nominee Bob Dole, according to the Tribune, and President Trump’s greeting is reportedly on the way.

The national hero – and hometown hero will be the guest of honor at a concert party of over 500 well-wishers on Saturday, March 11th aboard the USS Midway.

Local builders are working on a project to help renovate his house.

Janine Stange is a freelance writer and performer who earned the label “National Anthem Girl” after singing the “Star Spangled Banner” in all 50 states. Follow her on Twitter at @THEANTHEMGIRL.