The 66th iteration of Operation Christmas Drop took to the sky Dec. 11, 2017 as military leaders ceremoniously pushed the... 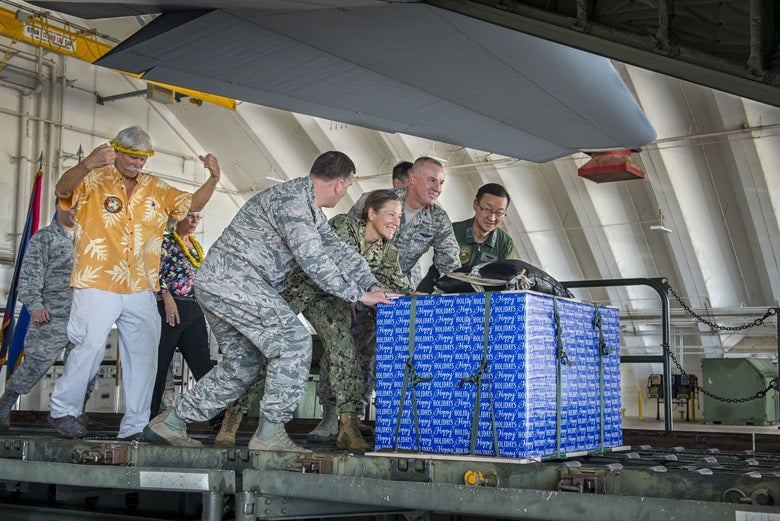 The 66th iteration of Operation Christmas Drop took to the sky Dec. 11, 2017 as military leaders ceremoniously pushed the first pallet of donated toys, food, supplies and educational materials into a C-130J Super Hercules at Andersen Air Force Base.

The ceremony marked the continuation of the longest running Department of Defense humanitarian and disaster relief training mission, which delivers donated supplies to remote Pacific islands via low-cost, low-altitude airdrops from C-130 aircraft.

“We are truly humbled with the relationship Andersen (AFB) shares with the men and women of Yokota Air Base, our Andersen (AFB)-based air mobility command unit, the 734th Air Mobility Squadron and our international partners,” said Col. Scott Hurrelbrink, 36th Wing vice commander. “While the training missions are conducted by maintenance and operations, it’s important to emphasize that this is truly a joint endeavor that includes raising awareness and collecting donations from the local community right here on Guam.”

The tradition began during the Christmas season in 1952 when a B-29 Superfortress aircrew saw islanders waving at them from the island of Kapingamarangi, 3,500 miles southwest of Hawaii. In the spirit of Christmas, the aircrew dropped a bundle of supplies attached to a parachute to the islanders below, giving the operation its name. Since its beginning, Christmas Drop has impacted more than 20,000 islanders annually, covering 1.8 million square nautical miles and more than 50 Micronesian islands.

“The role of military forces during any humanitarian assistance event is to rapidly respond with support to help mitigate human suffering and prevent further loss of life and property damage,” Master Sgt. Sean Gray, 36th Contingency Response Group first sergeant and project manager for the Operation Christmas Drop push ceremony. “This is what Operation Christmas Drop push ceremony prepares us for.”

For the first time, aviators assigned to the 374th Airlift Wing will fly the C-130J-model during Operation Christmas Drop. Utilizing new technology, the redesigned airframe eliminates the positions of navigator and the flight engineer, resulting in a smaller aircrew able to accomplish the same mission. This allows for lower operation and support costs over the earlier C-130 models.

Demonstrating and executing low-cost, low-altitude drops alongside regional allies is just one example of the Air Force actively pursuing and participating in interoperability partner training to increase operational capabilities while ensuring stability in the Indo-Asia Pacific region.

“The 374th Airlift Wing, and more specifically, the 36th Airlift Squadron, has transitioned to the newer C-130J Super Hercules over the last year, and we are proud to bring this aircraft and its improved capabilities to Operation Christmas Drop,” said Col. Sergio Vega Jr., 374th AW vice commander. “This year we will be able to fly farther, faster and with more cargo allowing us increased flexibility as we complete our mission and training objectives.”

Between sorties, more than 65,000 pounds of food, supplies, educational materials and toys will be dropped during the operation. The OCD committee raised more than $53,000 and received more than $20,000 in donated supplies for this year’s efforts to date.

“A lot of people come together to support such an amazing venture with either their donations or their personal time to ensure that this event is successful,” Gray said. “This is truly an amazing event that showcases the meaning of the holiday season.”