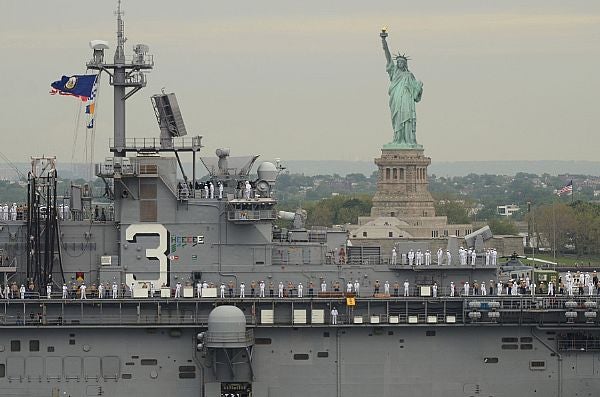 U.S. Army Garrison Fort Hamilton held a salute to the participating ships of 2017 Fleet Week New York (FWNY) during the official Parade of Ships kickoff May 24.

“New York has always had a close relationship with the military,” said Anthony Giovinco, U.S. Navy Vietnam veteran and chief of staff and secretary of the United Military Veterans of Kings County Memorial Day Parade. “The Sailors, Marines and Coast Guardsmen are treated very well here. This is a tradition that is important to me. It brings back fond memories of the years I spent in the military.”

Students from the area will have the chance to learn about military aircraft, military careers, and interact with Sailors and Marines throughout the week.

During FWNY, general ship tours will be conducted in Manhattan, Brooklyn and Staten Island.

Visitors will learn about the latest capabilities and technologies of today’s maritime sea services, such as job specialties, firefighting techniques, environmental safety, energy awareness and damage control aboard ships. There will also be the opportunity to see and interact with aviation static displays.

“Fleet Week New York is a way for the general public to view and experience the maritime sea services while allowing us to show our appreciation for our Sailors, Marines and Coast Guardsmen,” said U.S. Army Spc. Tanner Butler, currently assigned to U.S. Army Garrison Fort Hamilton. “I feel, that since 9/11, it is really important for the people of New York to experience these things and to remember that our fellow Sailors, Marines and Coast Guardsmen are there for us.”

FWNY, now in its 29th year, is the city’s time-honored celebration of the sea services. It is an unparalleled opportunity for the citizens of New York and the surrounding tri-state area to meet Sailors, Marines and Coast Guardsmen, as well as witness firsthand the latest capabilities of today’s maritime services. The weeklong celebration has been held nearly every year since 1984.