Don’t you just wish you could click your heels like Dorothy and ‘poof’ you were in your new duty station? ... 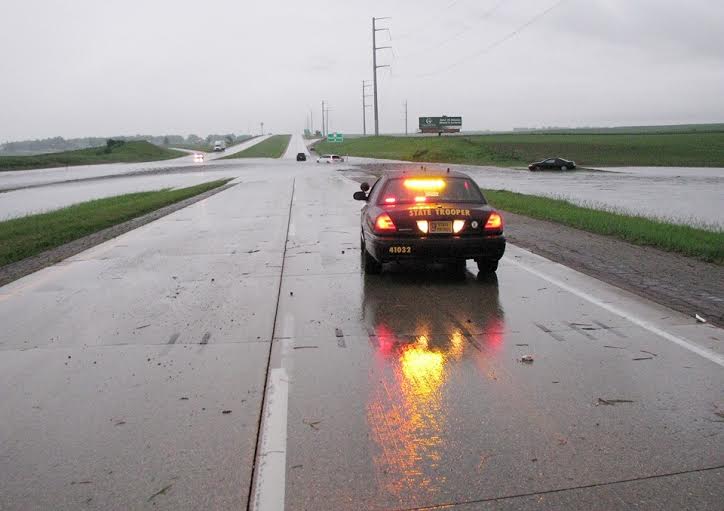 Don’t you just wish you could click your heels like Dorothy and ‘poof’ you were in your new duty station?  Well, I clicked my heels and, believe it or not, there was a tornado!! But we certainly didn’t end up in OZ. Instead we PCS’d from one side of the country to the other and I had no idea what a crazy trip it would be.

We began our journey across the nation from Washington, D.C. to San Diego, CA. We planned out short distances to rest and enjoy the scenery, but eventually had a long stretch in the car due to wide expanses of nothingness in the Midwest.

We left Chicago late in the morning to miss rush hour, but still got stuck in traffic for several hours due to construction and, of course, a longer than normal rush hour. Even though this delayed our trip several hours, when we hit the wide open road, we began making up time.

It began to rain but we didn’t let it dampen our moods as we chatted about life and the adventures awaiting us at our new duty station. The rains were getting heavier and the winds were growing in strength – it began to snap trees around us. We were nowhere near any kind of town and the freeway exits were very far apart. We weren’t sure what to do, so we just kept pressing forward.

The lightning became more intense with rapidly exploding bolts in the sky. We began to lose visibility and came upon a group of cars huddled underneath an underpass. We learned that there were tornado warnings and watches and knew that we shouldn’t park under an underpass in the event that one came through, but we needed some kind of shelter so we stopped anyhow. At least it helped with the wind so that it blew straight onto our car instead of pushing against the side of it.

While we waited the storm out, we rocked side to side as the wind and rain slapped our car around. I popped in a DVD so the kids wouldn’t get terrified by the storm. I desperately tried to update my Facebook page just so someone could find us if something happened – it was that scary.

After a couple hours, the storm eased slightly and we decided to continue forward since we could see again and made our way to our final destination for the night, Sioux Falls, SD. As we drove, we passed several blown over tractor trailers and came across parts of the freeway which were flooded. We finally checked in after 16 hours on the road and were happy to have a reservation in the now sold-out hotel.

I closed my eyes on the bed, and I hoped and prayed that this would be our only major catastrophe with the move. Later I would discover it was not to be. When we arrived in San Diego a week later and our movers finished unpacking us, we realized that they had lost the screws for everything they had taken apart. We needed to make the best of it, so we did our best to get settled in our new duty station and take care of finding new doctors, hairdressers, and dentists. First up – DENTISTS! We had lived in the San Diego area once before and I sadly, I learned that my former dentist had since sold their practice, so I set out to find a new one.

I always like to get referrals from other military families, so I checked local military Facebook groups for the area to see if there were recommendations.  Three people recommended the same dentist, so I knew I couldn’t go wrong. I checked out their website and while it was a bit further away than I wanted to go, I decided to contact them for an appointment because I know how important a good dentist is.

I called and asked if the dentist accepted MetLife TRICARE Dental Program and they relayed that they did. I made an appointment and they mailed me all the paperwork I needed to bring with me. Bonus! I love a good, organized dentist. They also offered to contact my last dentist to get all my records transferred on my behalf and let me know that they would take any new x-rays needed and that my plan provided coverage for. Perfect! I was happy to learn that they were familiar with Metlife’s TDP and they would take care of me.

Overall, finding a dentist, making an appointment, and getting seen was a super easy process and I was thankful for the help and recommendations of local military families. I also knew that if I was in a bind, I could always call MetLife at 1-855-638-8371 and get a list of local in-network dentists. Win-win.  You can also check out their easy enrollment page here:
MetLife TRICARE Dental Program

I’m still fighting with all the hassles of broken furniture and claims, but I’m thrilled to know that finding a new dentist for my family wasn’t going to be an issue on my to-do list! Kristine Schellhaas founded USMC Life in 2009 as a way to help inspire, connect and educate Marine Corps families. As a public speaker, she created the “Live, Laugh, Learn” military seminars and speaks regularly about her experiences as a Marine spouse for Operation Homefront, changes of perspective for families in military culture, and recovery from loss. Kristine has been recognized as a finalist for Marine Corps Spouse of the Year and has received two military base Spouse of the Year awards. She recently served on Military Officer Association of America’s (MOAA) Spouse Advisory Panel, where she is a champion for our children who have been drafted into the military lifestyle and has dedicated more than 10,000 volunteer hours serving military families.