PCS season is here!  Thank you to Kara Pieraccini from Ramblings of a Marine Wife for these great tips on... 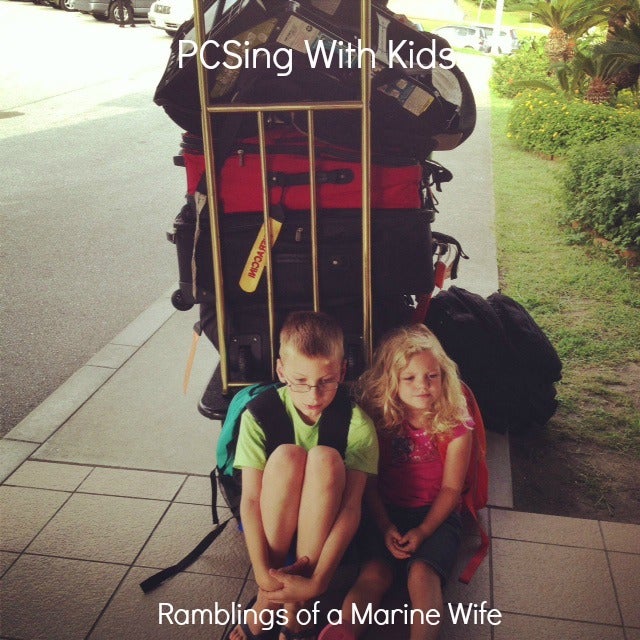 SHARE
PCS season is here!  Thank you to Kara Pieraccini from Ramblings of a Marine Wife for these great tips on PCSing with kids. PCSing with kids is never easy. The two times I’ve done it, it’s been overseas.

When the kids and I moved to Okinawa, they were 5 and 19 months. They are now 7 and 4. When we PCSed to Okinawa, Little Man wasn’t around for most of the packing and other things, so I only told him the basics. He wasn’t one to ask tons of questions either (oh, how times have changed!). Now, it’s constant questions from both of them. I’m not the best advice giver, but this is what we did and what worked with my kids.

I’m a big advocate of letting my kids know what’s going on in our lives (to a point of course). If it involves them, we talk to them and explain everything on their level. We let the kids know what was going on from the day we got orders. They had both known we were waiting on them, so it wasn’t a huge surprise. We explained when and where we were going, even showing them on maps in relation to where Okinawa is and where other family members live.

The kids helped sort through their toys, deciding what to sell and what to keep. Sure, I helped them make some decisions, but this way they knew exactly what was going on. They also went to the flea market with us. After explaining why we didn’t need to take everything and reassuring them that what was left would definitely be going, they were fine.

Little Man finished out the school year in Okinawa, so that wasn’t too weird. Little Missy finished preschool when I sold my car, but she got to say goodbye. They have both seen other friends since. We have friends where we are moving too, so we’ve talked about their kids. It can’t be easy for them, but Little Man has seen lots of friends come and go at school, so it isn’t a new thing for them. You’ve just got to keep it positive. Packing for the trip.

I packed all their clothes, but they asked to bring certain items of clothing and I worked them in. They were allowed to pick out their favorite stuffed animals for the plane as well as new books to keep them entertained.

Have them help with the new place.

We aren’t going to live on base. We told the kids they can help us pick a house and then pick their rooms. They really have no say whatsoever, but they don’t know that. They will get to help pick out things for their new rooms though.

I know all of this depends on the kids. My kids are pretty easy going so it’s not as hard, but some kids have a hard time with moving. I think if you include them and let them know what’s going on, it will be an easier transition for everyone. Kara is a 30ish. Mom to 2. MBA holder.
Lover of coupons, sweepstakes,
and freebies.
Small town girl at heart.