A dual military couple’s engagement has gone viral this week, thanks to a romantic story and a photographer’s Facebook album.... 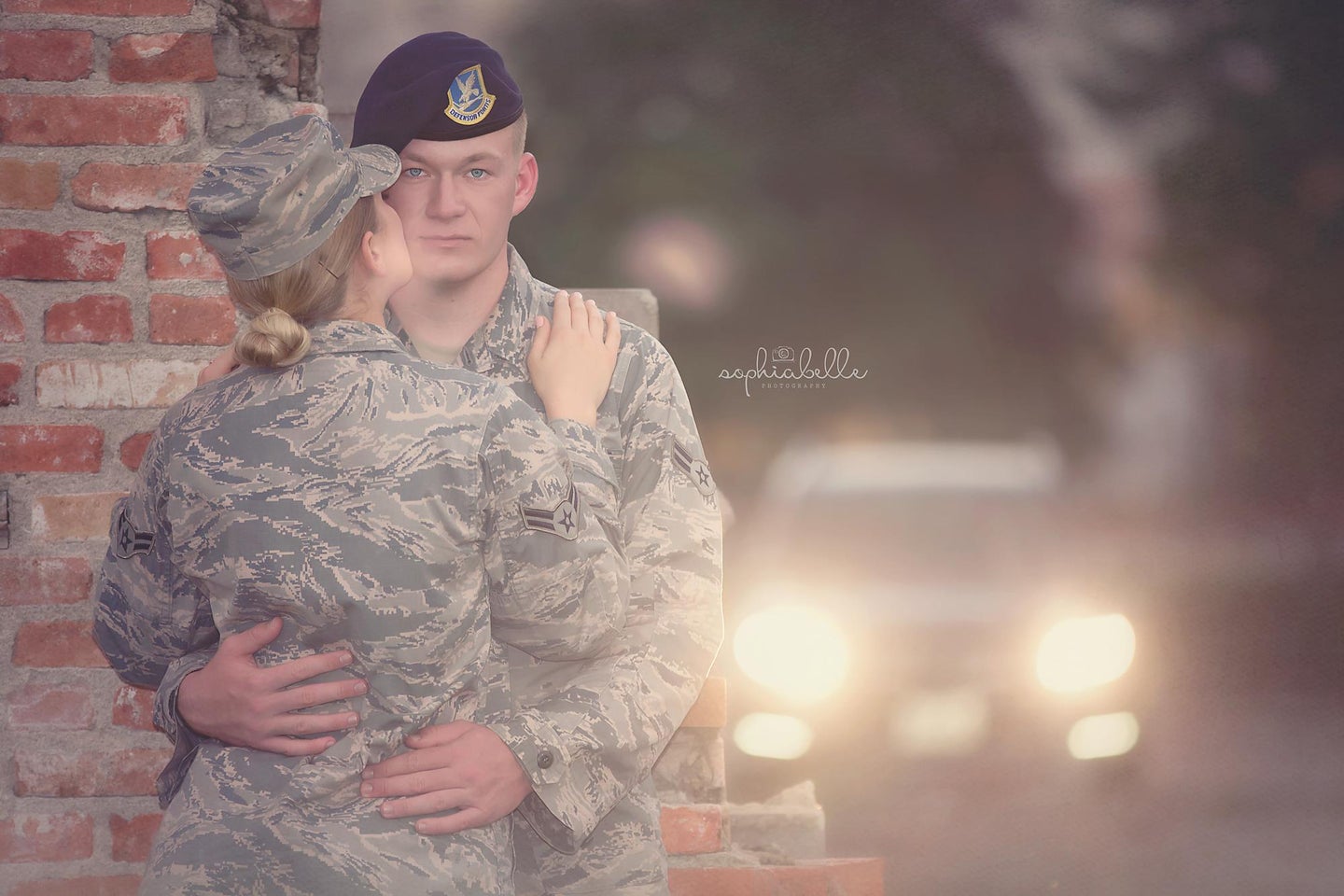 A dual military couple’s engagement has gone viral this week, thanks to a romantic story and a photographer’s Facebook album. Heather Carter, owner of Sophia Bell Photography captured the photo-session-turned-engagement-shoot in Beaumont, TX of two active duty Air Force service members, Emily and Elijah, earlier this month and published the album on Tuesday. “Yep. I cried when he did it. Yep. I cried when editing it. Yep. I cried while watching the video. This couple is definitely an inspiration,” the post reads.

Emily Walker, a native of Texas and newly minted service member, had reached out to Carter, asking her to schedule a photo session on short notice as Elijah Hasemeyer, her boyfriend, had just received approved leave. “I really wanted some pictures from you before we both leave again,” Walker’s email to Carter read.

Carter obliged and before long, she received a message from Hasemeyer: “I’m meaning to propose while I am there and would like to do it during the photo session if that is okay to do. I figured it would be the best time and I don’t think she would expect it at all.”

Recently returned from a six-month deployment to Africa, the Illinois airman knew that the photo shoot would be the perfect moment. “There would be cameras pointed at us, her nails would be done, it would be kind of a surprise,” he said. The couple met through a mutual friend and admit it had been love at first sight; he and Walker have been dating for more than a year and had talked about marriage before.

“I knew it would be amazing. And it was,” Carter says of Hasemeyer’s request. At the beginning of the shoot, she asked Hasemeyer and Walker to write the thing they loved most about each other on chalkboard signs and to keep it a secret from each other. Those boards were held by Carter’s husband, who was assisting her that day, while she ran the couple through multiple poses.

Of course, Walker had no idea of her boyfriend’s intentions and was enjoying her time; to Hasemeyer, it felt like forever. “I was nervous. I was super excited. I just wanted to get to that picture to finally do it,” he said, noting that he had the ring on him; for every new pose, he shifted it between pockets, afraid Walker would feel or see it and get suspicious.

Finally, the moment came. In the photos, a sweetly smiling Walker stands in the foreground, holding a board that says, “You never gave up on me.” In the background, Hasemeyer can be seen, an ecstatic grin on his face, with a sign: “Will you marry me?”

From that point forward, Carter didn’t direct the couple and captured every moment of the engagement–from Emily seeing the sign, to Hasemeyer’s proposal on bent knee, to the absolute joy in the moments after. The photos make it clear that Hasemeyer was right: Walker didn’t expect it and was certainly surprised.

And, perhaps Hasemeyer didn’t intend it, but his proposal has touched people in a very real and emotional way. At the time of writing, the album had been shared more than 35,000 times and received more than 16,000 reactions and 1,200 comments. Well-wishers have showered congratulations and compliments on the couple. “Huge congrats to you both! Thank you for your service! May God bless you now and in the future!” wrote one woman. Another took a moment to post, “Ugh, tears! So much love.”

The response has been overwhelming, Carter told MilitaryOneClick. “I’m still kind of in shock. I don’t think the pictures would have gone viral had they not been the kind of people they are.” The couple has been overwhelmed too, she said.

Hasemeyer and Walker both echoed those sentiments. “After it [the album] had been posted for an  hour, there had been 60 shares. . . and the next day, there had been 10,000 shares, we really had not been expecting it,” Walker said

Carter, the daughter of a Vietnam veteran, granddaughter of a US POW in Germany during WWII, and great-granddaughter of a veteran, frequently photographs military couples and is in awe of them. “These two, they have this amazing love for each other, but beyond that they have a shared deep devotion to their country. . . to my country.”

She said the couple has a connection that is so clearly obvious on and off film. “They just got to see each other for the session, so that made it even more special. I just mainly was trying to shoot through tears,” she said.

As for Hasemeyer and Walker, they are enjoying the fleeting moments together and are planning on a wedding in the next year. “We want to have a real ceremony to have both of our families there,” Hasemeyer said.

Editor’s Note: Carter also created a video of the proposal that can be watched here, but we suggest first finding a box of tissues and a pint of ice cream to go with it before viewing.