Thanks to a new “suit” being developed by the DOD-funded Warrior Web program, future Soldiers will be able to march... 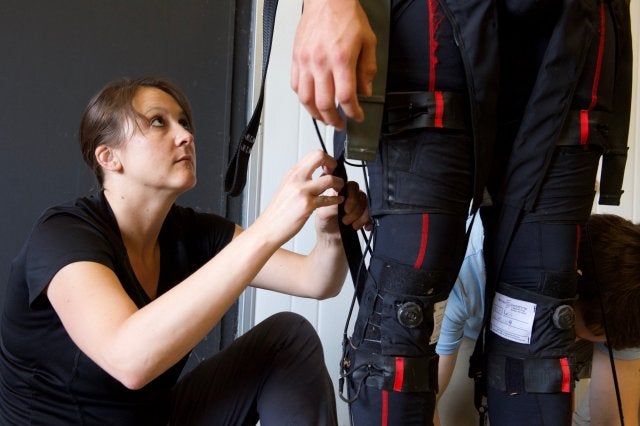 Thanks to a new “suit” being developed by the DOD-funded Warrior Web program, future Soldiers will be able to march longer, carry heavier gear and improve mental sharpness.

The suit has pulleys and gears designed to prevent and reduce musculoskeletal injuries caused by the dynamic events typically experienced in the Warfighter’s environment.

Scientists and engineers from the U.S. Army Research Laboratory have been testing variations of the suit for more than three years at the Soldier Performance and Equipment Advanced Research, or SPEAR, facility at Aberdeen Proving Ground.

“We’ve been primarily focusing on the physical benefits of these types of suits, but we’re also interested in the cognitive benefits,” said ARL researcher Dr. Angela Boynton. “We’re hoping that by reducing the physical burden, that they also have the ability to put more energy into other types of tasks that involve cognitive or perceptual workload.”

The project, funded by the Defense Advanced Research Projects Agency, or DARPA, has many partner organizations across the DOD and academia.

The U.S. Army Natick Soldier Research, Development and Engineering Center, the Maneuver Center of Excellence, the Army Capabilities Integration Center and the Military Operational Medicine Research Program met at ARL’s SPEAR in June for a soft “exosuit” demonstration and to discuss the path forward for the Army’s Warrior Web Program.

The program, which is funded by DARPA, is coming to an end; however, researchers hope to find future collaborators to expand on the progress gained in the current program iteration.

“In the longer term, the systems have benefits to be integrated into larger Soldier systems and can be integrated with other capabilities to provide a marked advantage for our Soldiers and our warfighters in the future,” said Maj. Christopher Orlowski, DARPA’s Warrior Web program manager. “I think it will take at least another five to 10 years to be ready for the infantry Soldier.”

A team of researchers from Harvard’s Wyss Institute in Boston, Massachusetts, led by Dr. Conor Walsh, associate professor of engineering and applied sciences at the Harvard biodesign lab, attended the meeting that was held in conjunction with ongoing testing at ARL. Walsh and his team have been working on and testing their prototypes on Soldiers since 2014.

“The meeting was a good opportunity for our team to summarize the progress we have made as part of the DARPA Warrior Web Program to other Army stakeholders and get their feedback on how they see the technology and what further work remains to continue to optimize it,” Walsh said.

Walsh said the latest version of the “exosuit” tested at ARL is the result of his team’s system integration efforts over the past year. He said the system is much more user friendly as compared to early prototypes and includes improved functional apparel attachments to the body, control systems that adapt to each individual, and actuation systems that are quiet and compact.

Edwin “Eddie” Davis, director of the Maneuver Battle Lab, Capabilities Development Integration Directorate Maneuver Center of Excellence, said he was impressed by what he observed and that Soldiers should have a say in what kinds of equipment they will use in combat.

“Warrior Web is a perfect example where engineers and Soldiers work together ‘early and often’ to develop a capability that might be useful for the future,” Davis said. “It also helps speed up the technology transition and program acquisition. Soldier feedback will help frame the Warrior Web Program outcomes and future Army investment.”

Henry Girolamo, NSRDEC program manager for the Warrior Web project, has been with the project since its inception.
Girolamo noted that the SPEAR facility has been highly beneficial.

“We have an indoor lab capability where we can instrument up the Soldiers and keep them in an environment where you can just get pure data on things like treadmills, motion capture and be able to analyze everything in the lab,” he said. “You can take them out on a three-mile course where it’s more aligned with the environments in which they would be working. We’ve got the best of both worlds.”

Walsh and his team agree.

“Our team has benefited greatly from working with the ARL team and Soldiers. We get to evaluate the system with potential end users who are walking significant distance on the treadmill and over ground,” Walsh said. “The feedback we get also informs our ongoing research and developments as we continue to refine the prototypes. Our team is interested in furthering the scientific understanding of how to best optimize these systems for individuals as well as refining the technology by creating more integrated systems suitable for every day wear.”

Researchers tested the same group of Soldiers in April and again in June, both with and without the suit, and gathered massive amounts of data.

“If you reduce the physical burden on somebody, there may be some benefits additionally to the amount of attention they can pay to their situational awareness,” Boynton said.

“I see it as a solution-focused suite of technologies that support a wide array of Soldier issues that we are having to deal with right now,” Girolamo said. “We need to iterate the technology a little bit further along to make sure we can actually do that and I know we can. We just need the funding and time to do that.”