Pumping on the job is worth any hassles, breast-feeding moms say 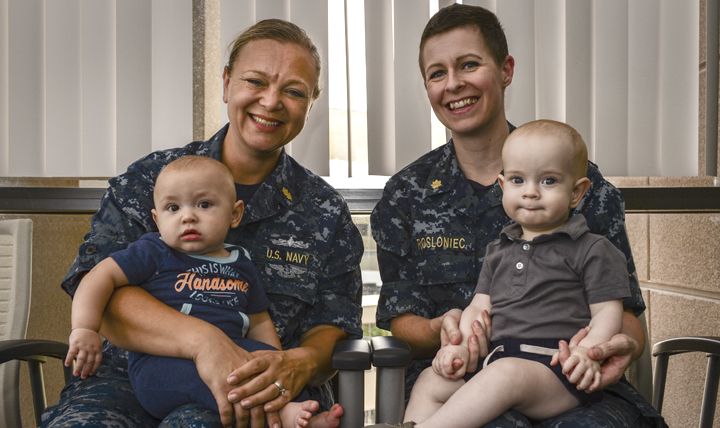 “It can start out being a lot more difficult than you think it’s going to be,” Rosloniec said, noting some babies have trouble latching on to the breast, and some mothers have difficulty producing enough milk.

“Breast-feeding can be emotionally taxing, and you’re often sleep-deprived,” she said. “And when you’re a military mom and pumping at work, it’s truly a labor of love.”

Aug. 1-7 marks World Breastfeeding Week, an annual global campaign to promote the benefits of nursing. This year marks the 25th annual event, which is recognized in more than 170 countries.

The World Health Organization and American Academy of Pediatrics both recommend infants get breast milk exclusively until they’re 6 months old to achieve optimal health and development. But only about 22 percent of new mothers are still exclusively breast-feeding at the baby’s 6-month birthday, said Navy Lt. Alea DePauw, citing statistics from the Centers for Disease Control and Prevention. The Military Health System no longer tracks breast-feeding rates, she said, but they most likely mirror civilian numbers.

DePauw is a registered nurse certified in maternal newborn nursing and, like Rosloniec, she’s a breast-feeding mom working at Naval Medical Center San Diego, where about 3,000 babies are born annually.

One reason many women stop breast-feeding is because they return to work full time. Pumping on the job – expressing breast milk for babies to drink while they’re being cared for by others – can be awkward and inconvenient. Rosloniec said that’s why it’s important to have lactation policies for working mothers who want to continue breast-feeding.

“Support is the No. 1 thing you can do to promote breast-feeding,” she said.

DoD’s policy requires mothers’ rooms in facilities where more than 50 women are regularly assigned. Each room must be a clean, private space –  not a restroom – with electrical outlets, comfortable chairs and a table, a water source for washing hands and rinsing pumping equipment, and dedicated refrigeration for breast milk.

But scheduling time for regular pumping breaks can be tricky. Navy Lt. Lauren Dinan returned to work as a nurse practitioner at Naval Medical Center Portsmouth, Virginia, when daughter Josie was about 3 months old. Dinan’s husband stayed home with Josie. For four months, Dinan continued to breast-feed in the mornings and evenings. During the workday, she’d take two 40-minute breaks to pump for Josie’s bottles the next day.

“My supervisors were really good about giving me adequate time to pump,” Dinan said. “But I was stressing about seeing patients and getting all my work done – and the stress wasn’t helping my supply. I stuck with it, though, because I really wanted to get to that six-month mark.”

“It’s hard to walk away from your desk twice a day to pump, especially in the beginning,” said Liz Ribeiro, an information technology specialist supporting the Office of Health Services Policy and Oversight. Her son, Benjamin, is 9 months old. When Ribeiro returned to work at Defense Health Headquarters after 12 weeks of maternity leave, she pumped twice a day for several months before tapering to once a day. With Benjamin now eating solid foods, Ribeiro still breast-feeds in the mornings and evenings but no longer pumps during the workday.

“You settle into a rhythm, and it’s not so bad,” she said. “You can make it work. It’s not as hard as it might seem at first.”