By Bobbie A. Camp On Memorial Day, a juvenile Kemp’s ridley sea turtle was incidentally hooked by a recreational fisherman... 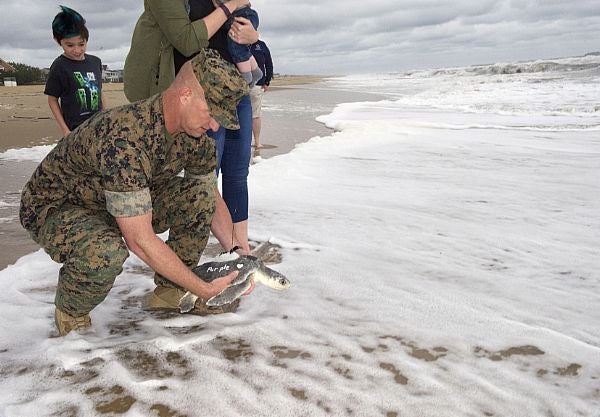 By Bobbie A. Camp

On Memorial Day, a juvenile Kemp’s ridley sea turtle was incidentally hooked by a recreational fisherman at the Ocean View Fishing Pier in Norfolk, Virginia. As a result, the Virginia Aquarium & Marine Science Center’s Stranding Response Team was called in to rescue the sea turtle.

The turtle, aptly named ‘Purple Heart,’ had the fishing hook removed from its upper esophagus. The turtle was under sedation and the procedure was completed with no complications. Upon successful recovery, the turtle was not only cleared for release, but also for satellite tagging.

Trish Carrier, the annual fund manager for the aquarium and a spouse of a retired U.S. Marine, reached out to find a Purple Heart recipient who would be available to help with the release.

“Things worked out perfectly on the U.S. Marine Corps side, as my husband knew at least one Purple Heart recipient that worked on Fort Story,” said Carrier. “Everything fell into place in less than 24 hours.”

Gunnery Sgt. Paul Worley, attached to Marine Corps Security Corporation Group (MCSCG) at Joint Expeditionary Base Little Creek-Fort Story, volunteered to release the turtle back to sea on June 8 at the Virginia Beach oceanfront. He was also joined by his wife and children.

“I have always felt that it is the responsibility of all people to take care of our planet and the ocean is probably the biggest part of that,” explained Worley. “A small thing like watching a sea turtle that might have died if people would not have intervened and is now able to swim out to sea with the hope and possibility of making it to adulthood and produce offspring – gives me hope.”

Worley is a 2009 Purple Heart recipient for being wounded during a tour in Afghanistan.

“Hope is a powerful thing,” continued Worley. “There have been times in my life where hope was all I had, and it always has been enough to see me through.”

Worley and his family were excited to be a part of the sea turtle release, and sea turtles are their favorite animal. The family went on to adopt ‘Purple Heart.’

“Gunnery Sgt. Worley was such a perfect fit,” concluded Carrier. “It was so wonderful to share such a special experience with the Worley’s. What a day!”

Prior to being released back into the ocean, ‘Purple Heart’ was tagged as part of a joint Virginia Aquarium & Marine Science Center Foundation (VAQF) – U.S. Navy research project. VAQF works with U.S. Fleet Forces Command (USFF) and Naval Facilities Engineering Command (NAVFAC) Atlantic to track juvenile loggerhead, Kemp’s ridley and green sea turtles by using a combination of satellite and acoustic transmitters. Funding for this work is provided by USFF, while VAQF and NAVFAC Atlantic analyze the telemetry data in order to understand how sea turtles use the Chesapeake Bay and coastal Virginia waters.

Currently, the U.S. Navy’s understanding of sea turtle movement and habitat utilization in this region is limited. Further information on the movements, habitat use, and seasonality of the sea turtles in this region will allow for a better assessment of the potential impacts that U.S. Navy activities may have on these protected species as well as design better mitigation measures to further protect these species.

You can track ‘Purple Heart’ and other tagged U.S. Navy sea turtles by visiting http://www.seaturtle.org/tracking/index.shtml?project_id=917