Remarks by The First Lady from today’s event! 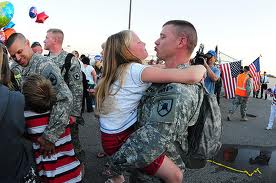 Office of the First Lady

REMARKS BY THE FIRST LADY

MRS. OBAMA:  Thank you all so much.  Please be seated.  Forgot you all take orders really well.  (Laughter.)  I am beyond thrilled to be here with all of you today at Naval Station Mayport.  And I want to start by thanking Paul for that very kind and, for me, moving introduction.  And I also want to thank Vice Admiral Van Buskirk for his remarks as well today and for his strong leadership in America’s Navy.

And I also want to recognize a couple of people who are here — Representative Brown for her service.  I understand the Mayor is here as well.  But I also want to thank Rear Admiral Sinclair Harris and his wife, Cora; Captain Douglas Cochrane and his wife, Anne; as well as Command Master Chief Robert White and his wife, Lesley.  Thank you for hosting us here today.

I know that we’re being broadcast live into every U.S. military base –- here in America and around the world –- and we’ve got folks tuning in from as close by as Tampa and Pensacola, and as far away as Kabul and Seoul.  And on behalf of myself and my husband, I want to start off by saying that we are so proud of your service and so grateful for your sacrifice.

You all — and I say this time and time again, and I mean it every time I say it — you all are the very best of America.  You all have given so much to this country.  And I’m here today because I want to talk with you about what this country is doing to give back to all of you.

As you all may know, last August — I think you saw a video — my husband issued a challenge to American businesses.  He challenged them to hire or train 100,000 veterans and military spouses by the end of 2013.  And since Jill Biden and I launched Joining Forces, he asked the two of us to take the lead on working with companies to fulfill this challenge.  And I have to admit, when you get an order from the President, it’s a little daunting, even if he is your husband.  (Laughter.)

So I was a little nervous, and I thought this challenge was pretty ambitious.  And when we first started out, we only had two companies as our partners, and I wondered to myself how we were going to get from there to 100,000 new jobs in two years.

But, fortunately, I didn’t have much time to sit around and worry, because before long, companies across this country started stepping up — big companies like Siemens and Sears; small businesses like tech startups and restaurants and transportation providers.  And soon, those two companies became 20, and then 200, and then 2,000.

And it would be understandable if these companies just stopped now and patted themselves on the back for a job well done and called it a day.  But instead, these companies are doing just the opposite –- they’re doubling down on their commitment to all of you.  And today, they’re pledging to hire or train another quarter of a million of our nation’s heroes — a quarter of a million — 250,000 -– including at least 50,000 military spouses. (Applause.)

I want to send a very clear message to the men and women who are wearing or who have worn our country’s uniform, and to their spouses:  When you have finished your service to our nation, you have got 2,000 great American companies ready and waiting to bring you on board.

Because the truth is, they know, they’ve learned what you all have to offer.  And I can’t say this enough.  These companies are not making these commitments just because it’s the right thing to do — which it is — they’re doing this because it’s the smart thing to do for their bottom lines.  I think the CEO of Sears put it best when he said at one of our events — and this is a quote — he said, “The men and women of our military, their spouses and their families are some of the most gifted, talented employees that we have in the company.”   That’s what he said based on his experience.

And that’s a story that we have heard thousands of times over, because these companies know that if you can repair a helicopter engine in Mayport, if you can coordinate thousands of pounds of supplies being delivered to villages across Afghanistan, then clearly, you have what it takes for a manufacturing or a logistics job right here in the U.S.

If you can work with sophisticated radar that guide high-speed missiles into other places, outer space, if you can operate complex communications systems from a tent in a desert, then clearly, you’re ready to succeed in our high-tech industries here at home.

If you can work with people from all different cultures and backgrounds, if you can lead dozens, even hundreds of your peers in life-or-death missions, then clearly, you’ve got the management and interpersonal skills that we need in every sector of this economy.

So make no mistake about it, you all have the talent, you’ve got the training and the experience to lead America’s economic comeback, and America’s businesses understand that.  And that’s why they’ve stepped up so readily to answer this call.  That’s why they’re hiring folks like all of you every day all across this country.

And that’s part of the reason why the unemployment rate for veterans has been dropping.  And so far this year, the number of unemployed veterans is nearly 20 percent lower than it was a year ago.  So we are moving in the right direction.  But let’s be very clear that we are nowhere near where we need to be — nowhere near.  When it comes to employment for our veterans and military spouses, we have still got a long way to go.

So while our businesses are doing their part, my husband is making sure that our government is doing its part, as well.  That’s why he’s proposed a Veterans Job Corps, investing $1 billion to help our veterans become police officers, EMTs and other jobs serving our communities here at home.  And last year, he signed two new tax credits to make it easier for businesses to create jobs for veterans, including wounded warriors -– and he’s fighting to extend those credits before they expire at the end of this year.

And to make sure that you all know about all the jobs being created, we’ve worked with companies like Google and Linkedin to create the Veterans Job Bank.  Now, this is a website where companies who want to hire veterans can post their jobs.  And you all can find it, anyone listening, you can right to nrd.gov.

There are now more than 1 million jobs posted on that site  –- 1 million jobs today, right now, along with the skills translator, special software that takes your military specialty  -– your NEC -– and it shows you what jobs would be a good fit for you in the civilian world.  So that website is out there, and it’s available for everyone who is watching.

And finally, we’re making it easier for our military spouses to actually get these jobs by challenging all 50 states to help them transfer their professional licenses when they move from state to state.  Because if you’re a nurse or a teacher or a real estate agent or a dental hygienist, or have one of the many jobs that require a professional license, we know that you shouldn’t have to face a new licensing effort — new fees, new paperwork and red tape every time your family moves to a new state.  That’s ridiculous.  And so far, 26 states have adopted measures to help military spouses transfer their licenses or more easily obtain new ones.

And today, again, I want to renew our challenge to those remaining 24 states to find their own solutions to ensure that our military spouses can continue to provide for their families and practice the professions they love, because more than anything else, truly, that is the story of Joining Forces.  That’s why we started this effort — because it’s the story of folks across this country stepping up and doing everything they can to serve all of you as well as you have served this country.

Whether it’s doctors and nurses improving treatment for PTSD and TBI, whether it’s teachers reaching out to our military kids, whether it’s TV shows like Sesame Street and organizations like NASCAR sharing the stories of military families, or people spending millions of hours serving veterans and military families in their communities, since we launched Joining Forces, what I have to just let you know is that not a single person that we’ve approached or talked to has ever told us that they couldn’t help. Not one.  Instead, they ask us, what more can I do, and what else can I do?

And every day, we’re seeing the impact of these efforts in communities across this country –- in the military kids whose teachers finally understand what they’re going through; in veterans who are finally getting the quality care they’ve earned.

And today, we’re seeing it in 125,000 men and women who have now — have the jobs and training they deserve — 125,000 people who are providing for their families and contributing to our economy and continuing every day to serve the country they love.

And this is just the beginning.  We are only scratching the surface.  We’re just getting started.  And we’re not going to stop until all of our veterans know that when they hit that job market, their skills will be rewarded.  We won’t stop until all of our military spouses know that the next time their family is transferred, they won’t have to leave behind their professional lives.  And I won’t be satisfied — nor will my husband -– until every single veteran and military spouse who wants a job has one. All of you deserve nothing less.  Nothing less.

So today, I want to once again thank you all.  Thank you for your service to our country.  You all make us so incredibly proud.  So let the work continue.

Thank you all.  God bless.