Renewing the Commitment to Put America’s Heroes Back to Work

THE WHITE HOUSE Office of the First Lady FOR IMMEDIATE RELEASE February 25, 2013 Renewing the National Commitment to Putting... 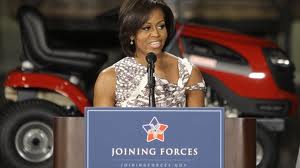 Office of the First Lady

Washington, D.C. – As part of their Joining Forces initiative, First Lady Michelle Obama and Dr. Jill Biden addressed the National Governors Association and renewed their call on governors to do their part putting America’s heroes back to work, and to serve our military veterans and spouses as well as they’ve served us.  The First Lady’s remarks are a call to action – building on President Obama’s June 2012 announcement of the Military Credentialing and Licensing Task Force – setting a goal that by the end of 2015, all 50 states will have taken legislative or executive action to help our troops get the credentials they need to successfully transition to the civilian labor market.

The remarks by Mrs. Obama and Dr. Biden coincide with a new report by the Executive Office of the President that details the barriers veterans and their families face as they seek employment, the Administration’s commitment to help them leverage their skills to good, meaningful jobs and the progress that has already been made.

The United States has the most highly trained military in the world, sustained by individuals who have skill sets with enormous breadth and depth because of their military education and experience.  The members of our Armed Forces and their families make great sacrifices, and when their service is concluded, we owe it to our veterans and their families to help them accomplish a successful transition to the civilian labor market. That is why over the past year and a half, the President has taken significant action to create a “career-ready military” and streamline the transition process.

Too often the talented men and women who have served our country face barriers that make it difficult to find jobs that capitalize on their skills. Many service members and veterans are required to repeat education or training in order to receive industry certifications and state occupational licenses, even though much, and in some cases, all, of their military training and experience overlaps with credential requirements.

Additionally, frequent moves, and the resulting need to search for new employment, can be a significant problem for military spouses, especially when getting a job in a new state requires obtaining an occupational license. Leveraging the skills of our military veterans and their families will build a stronger workforce and a more competitive economy.

The Fast Track to Civilian Employment

In the coming years, America will see a continued demand for skilled workers in high-growth industries from healthcare and information technology to clean energy and advanced manufacturing.

Studies generally find that both occupational licenses and government certifications are associated with higher wages, with substantial wage premiums—on the order of 15 to 18 percent—for individuals who hold an occupational license.  Those without licenses often have to take jobs in different, lower-paying occupations.

Despite having valuable military experience which in many cases is applicable to well-paying civilian jobs, veterans frequently find it difficult to obtain formal private sector recognition of their military experiences and skill sets through civilian certification and licensure.

Frequent moves resulting in the need to search for new employment, can inhibit or delay military spouses from continuing employment, especially when getting a job in a new state requires obtaining an occupational license.