Joseph Stickle thanked the arresting officer when he was picked up for heroin possession in his hometown of Tampa, Florida,... 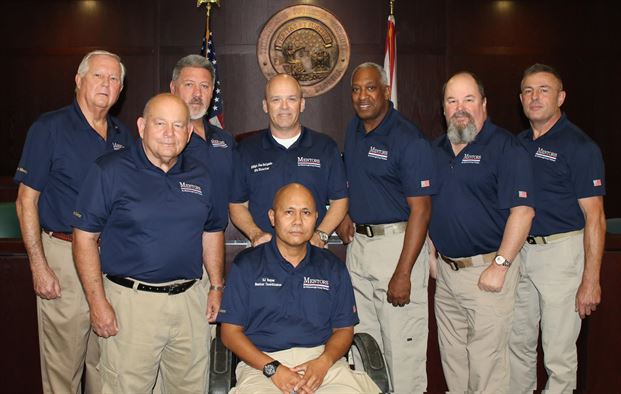 Joseph Stickle thanked the arresting officer when he was picked up for heroin possession in his hometown of Tampa, Florida, earlier this year.

“He saved my life,” said Stickle, Navy veteran with a 35-year history of drug and alcohol abuse.

The arrest cost him his marriage and kids but led him to Senior Master Sgt. James Salgado and the 13th Judicial Circuit Veterans Treatment Court, which helped him keep his job of 19 years at the Department of Veterans Affairs, rebuild his life and avoid a felony conviction.

Salgado, an Air Force Reserve Individual Mobilization Augmentee at U.S. Special Operations Command, MacDill Air Force Base, Florida, is one of the senior mentors and the operations director for the Tampa-area Veterans Treatment Court, both volunteer positions; he served as Stickle’s mentor while the vet went through the rehabilitation program.

A Veterans Treatment Court is a non-adversarial, problem-solving court dedicated to helping veterans who were honorably discharged or separated and, thru commission of a misdemeanor or felony offense, became involved with the criminal justice system. VTCs are often affiliated with the local VA and bring together specially trained judges, case workers and volunteer mentors to rehabilitate veterans and reintegrate them with their communities. Instead of a jail sentence, veterans are placed into a recovery program. In many cases, if they graduate, they are free to go and leave the program with charges dropped. The 13th Circuit Court’s VTC was established in 2013, one of nearly 500 in the nation, and has served as a model for other courts nationwide.

According to the Justice For Vets website, a national non-profit that works to promote the VTC model, veterans suffering from service-related mental health issues, such as post-traumatic stress disorder and traumatic brain injury, often fall into patterns of substance abuse or criminal activity after leaving the support network they had in the service. Nearly half of veterans suffering from PTSD and TBI never seek treatment and there are currently over 180,000 incarcerated veterans.

Prior to gaining access to the rehabilitative services available through the VTC, veterans must appear before the judge, who does discovery and confirms they are eligible based on their service record and the type of crime committed. Once they are enrolled in the program, which ranges from 6 to 18 months depending on the crime, the veteran is connected with a mentor, like Salgado, who keeps them accountable and helps them connect the dots on the numerous resources available through the VA and community organizations. The Tampa VTC even provides access to chaplains and therapy dogs.

“It’s a complete, end-to-end solution,” said Salgado, who related the story of one veteran who was able to successfully stand in front of the judge only after a local organization provided him with a therapy dog that helped him cope with his PTSD.

Scionti said the VTC model keeps veterans from serving jail time for issues that stem from their time in the service. Instead of delivering punishment, the program helps address the root issues, such as PTSD and military sexual trauma, which brought the veteran into contact with the law in the first place. The judge added that the court is made up of a whole cadre of volunteers and professionals who are there to help veterans rehabilitate and reintegrate into society.

As the third largest city in Florida and home to two of the heavy lifters in the global war against terrorism – U.S. Central Command and USSOCOM – Tampa has a large veteran population. Retired Army Col. Darryl Reyes, who has been involved with the local VTC from its beginning, said they have witnessed and handled countless cases of post 9-11 combat veterans who committed criminal acts that were service related to such VA diagnosed disorders as PTSD, TBI, substance abuse and military sexual trauma.

“If there were ever a venue where a VTC was needed, I would say that Tampa is that place,” he said.

The 13th Circuit Veterans Treatment Court has one of the largest dockets in the country and enjoys an 80 percent success rate, said Reyes, who was responsible for building the mentor program when the VTC was launched in 2013. He added that the VTC program currently saves the county tax payers almost $6 million annually. The court is currently tracking approximately 200 veterans and maintains a bi-weekly docket of more than 80, a number that continues to grow as word spreads about the program’s success.

“It’s the only court where expanding the docket is a good thing,” said Scionti.

Salgado said his drive to help other veterans stems from his father, a World War II combat veteran who came back with PTSD and struggled with drug and alcohol dependencies for many years.

“I always had it in me to help veterans,” said Salgado, who has mentored veterans from his father’s generation to the present one.

As a senior mentor in the Tampa VTC, Salgado supports the five to ten veterans, like Stickle, who are assigned to him at any given time; he also manages the other volunteer mentors. His team of mentors keep the veterans accountable and connect them with community services, including transportation. They were giving out bus passes but found the veterans burned through them at an unsustainable pace. Salgado had a solution – bicycles.

The Reserve Airman, who has ridden bikes his whole life, began collecting donations of used bicycles, mostly 26” men’s mountain bikes, tuning them up and then donating them to the VTC veterans who needed transportation. Not only were the bikes a more affordable, long-term solution to transportation, they also provide the veterans with an avenue to fitness, another important aspect of the treatment process. Salgado said that most of the buses in Tampa have bike racks, anyway, so the rider can easily combine modes of transportation.

Additionally, Salgado is also the program operations director for the VTC, a role he estimates takes him about 30 hours a week to fulfill. He maintains all of the administrative functions, including processing the weekly docket and assigning mentors. He is also in court with the veterans every two weeks.

Reyes, who recruited the individual mentor augmentee into the program, said Salgado’s senior rank, leadership, operational experiences and people skills not only made him the ideal veteran mentor but also facilitated his quick rise in the VTC ranks to his current position.

“He has earned the praise and the respect, not only from the Judge, judicial support staff and supporting organizations, but also from his fellow mentors and the veteran defendants in the program,” said Reyes.

When he’s not helping rehabilitate veterans, Salgado is on duty with USSOCOM, where he is assigned as an Air Force Reserve Individual Mentor Augmentee and also serves on active-duty orders as a foreign disclosure officer in the intelligence directorate. He is responsible for brokering information with partner nations and works closely with other military organizations, as well as government agencies in Washington, D.C., Salgado is the only Airman with letter-granting authority for disclosure approvals.

Individual mentor augmentees are part of Air Force Reserve Command’s Individual Reserve program, which also includes the participating individual ready reserve. Augmentees are assigned to active-component organizations and government agencies all around the world, augmenting their full-time counterparts and providing a way for an organization to plus-up on manpower when the need arises.

Salgado said his chain of command at MacDill AFB is very supportive of his work with the VTC and he often recruits new mentors, something the VTC is always looking for, from the senior non-commissioned officer corps on base. Salgado added that the reward is well worth the investment for anyone giving their time to support the court.

“We make (the veterans) work, this is not an easy road,” said Salgado. “But, when you see them graduate, that’s the bread and butter for mentors – you’ve given them their lives back.”

Navy veteran Stickle said he started using drugs at the age of 13 but put that on hold when he entered the service in 1986. Then, during Desert Shield and Desert Storm, he witnessed a ferry boat accident in which 21 sailors died. This took an emotional toll that led him back to his old habits. He left the Navy in 1992 and things went downhill from there.

The former drug addict described himself as being at rock bottom when he walked into his first VTC hearing. But, through the support of his mentor and the resources made available to him, such as Alcoholics Anonymous and the VA, he has started living a life he didn’t know was possible. He credits Salgado’s mentoring and friendship as key pieces of his success.

“Without VTC, I’d be a dead man,” said Stickle. “By offering me something I could follow, it made all the difference in the world.”