I Did It: How to Run a Marathon During Deployment

In so many ways, deployments are a marathon. They start off easy enough, but a few miles in and you... 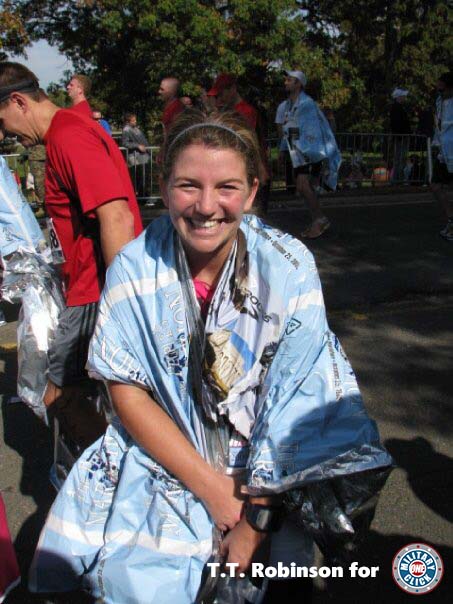 In so many ways, deployments are a marathon. They start off easy enough, but a few miles in and you realize just how far you have to go. I remember the moment well that I signed up for my first (and to date, only) marathon.

I was sitting in an airport wondering how on earth I was going to pass the time of my husband’s absence. I’d left my job in DC to follow him to Guam where I couldn’t find work, didn’t know a soul, and had driven around the entire island on the first day of a three year tour. He deployed just weeks after we’d arrived.

I’d signed up for golf lessons, joined our spouses’ club, was finishing my master’s degree online, traveled, and still had a good 15 hours of the day left to fill. So there I was, sitting on the floor at LAX en route back to Guam after a Space A trip home, and I got an email from Runner’s World, encouraging me to sign up for a race. The longer I sat there, the more it made sense to me.

We didn’t have kids, I had plenty of time, and more than anything, I needed a project. And before I knew what I was doing, I signed up to run the Marine Corps Marathon, on a charity bib. I’d committed to raising money for the No Greater Sacrifice Foundation in exchange for an entry to the MCM.

I joined one of the Runner’s World Challenge groups to keep me accountable and motivated, and spent the next several months training. Training for and finishing a marathon was one of the proudest moments of my life. Here are my five tips for running a deployment marathon:

Give yourself plenty of time

Whether you have an entire wall dedicated to your race medals, or you have to google “How far is a marathon?” don’t rush your training. Find the plan that works for you and go from there. I needed a “couch to marathon” program and that’s exactly what I found. Once you know how long you need to train, find your race. There are so many fun ones out there, from the Rock and Roll Series, to runs through Disney. Admittedly biased, I think that during a deployment it might be hard to top seeing the countless Marines line the route of the Marine Corps Marathon. There’s been plenty of research that says you’re more likely to do something if you announce it. Whether you post it on social media, tell your friends and family, or make a wager with your spouse, tell someone you’re committing. By announcing your intention to run, you’re more likely to stay on track (pun intended).

After announcing your race, take one step further in accountability by finding someone to run with you. Whether it’s an online community like I had, a running club in your area, or a friend, having a support system extends far beyond the track. These are the people that will encourage you when it’s raining, answer your questions about GU  versus sport beans, and keep you motivated. My best friend and neighbor also signed up for the Marine Corps Marathon. Although we didn’t do our runs together, we definitely encouraged each other throughout training.

And, if the fire alarm goes off in the hotel at 4 AM two nights before the race, sitting on the curb in jammies is always better together.

After months of training and fixing all the things that have broken during deployment, you’re finally ready for race day. The best advice I received was to dedicate each one of the last 6 miles to someone, and to let that person know you were running that mile for him or her. Those last few miles are so hard, but knowing that you can’t quit on someone that means something to you is a compelling reason to keep on running. I couldn’t quit on my sister, or my husband, or the kids from No Greater Sacrifice who lost their dad in the war. I couldn’t quit on my grandma, my mentor, or a soldier who used to run ultra-marathons before he lost both legs to an IED. I looked at those last six miles as a privilege. I was able to run when so many no longer had that chance. The adrenaline kicked in and those last six miles were faster than my first six.

[Tweet “I was able to run when so many no longer had that chance. #mcm #milspouse”]

Soak it all in

Buy the race gear, take plenty of selfies, and allow yourself to feel so proud. Write your name on the front of your shirt so people can cheer for you as you run toward them. Ask your family or friends in the area to come out on race day to celebrate with you. Finishing a marathon, just like a deployment, is a huge accomplishment, and definitely more fun with the people you love at the finish line.

There’s no better way to get through a marathon deployment than running a deployment marathon. There will be literal ups and downs, rainy days, aches, and pains, but crossing that finish line is oh, so sweet. Let us know what race you’re running and maybe you’ll find your running buddy in the comments. T. T. Robinson is a proud Navy wife, writer, and crisis management consultant – a skill that proves useful as the mother of two young children. She is the founder of Humans on the Homefront, author of the New York Times Deployment Diary, featured contributor for SpouseBuzz, and political correspondent for NextGen MilSpouse.