A good ole girl from the South finds support, friendship and so much more from a kind, strong Marine. 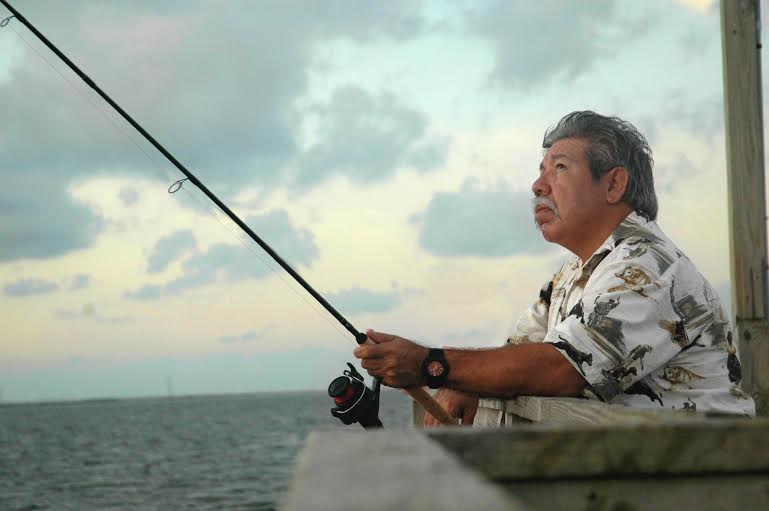 In the South Texas winter of 2007, I was a blissful newlywed, living away from my beautiful North Carolina for the first time. I entered a world I barely understood. The Navy was a big, intimidating leviathan. It had already taken my sweetheart away several times before, and it showed no signs of stopping. I was a Navy wife now. There would be deployments. Moves. Tractor trailers full of our earthly possessions. It could be 20 years before I get to live somewhere more than three years. It was the farthest from my comfort zone I had ever been, and I was terrified and excited.

I had been married for three months when I was made aware of a job aboard Naval Air Station Corpus Christi (NASCC) as the Editor of the base newspaper, The Wingspan. Enter my dear friend and boss, Bob Torres, Public Affairs Officer (PAO). I met with him to go over my credentials, which quickly became discussing the best barbecue and fishing spots in South Texas. I signed paperwork the following week to begin my first job as a married lady. I remember what a booming presence he had. Huge, genuine smile. His office was small and dated, but reflected his accomplishments with grace and pride. He was a veteran, a retired Gunnery Sergeant and a damn proud Marine, as they all are. We worked in NASCC’s administrative building, where the Commanding Officer, Executive Officer and Command Master Chief’s offices were located. This meant there was no shortage of traffic and visitors, which also meant our spare chairs were never empty. Friends, colleagues and coworkers (they were all one entity for him) would drop by and we would all end up at lunch together. I might have been in unfamiliar territory, but I was surrounded by a network of individuals who wanted nothing more than to include me and educate me in the ways of the military, and Bob was deadset on my knowing everything and everyone.

He took it upon himself to introduce me to literally every person we encountered. He knew them all, from his darling waitresses at the Bay Club to the COs/XOs/CMCs and Admirals to the local television personalities who meant so much to him. But he didn’t just know them in general. He knew them honestly and kindly (most of the time) and it was never a quick word with him. Bob wanted to know how that difficult situation was going, tell you congratulations on your new car, ask how your golf game was, when were you going hunting and did you know he was going to Colorado soon? The ability to hold a meaningful conversation with strangers is an art. To see him turn a crowd of hundreds into a few, intimate, individual dialogues was a sight to behold. I’m sure not everyone he encountered felt this way. But you probably missed a deadline or voted a little to the left and he wasn’t about to forget that. This man made a big impression on everyone he encountered. Take that as you will. And while our time together wasn’t without the occasional squabble, it was an unconditional bond of friendship which blessed me beyond measure.

One of my most cherished possessions is a photograph Bob snapped in Flour Bluff, Texas on a particularly vibrant evening. The sky carries a spectrum of colors, the clouds look to be on fire, and a single mesquite tree is silhouetted against it all. I received the photograph matted and framed. On the mat, he included a personal message and signed it as he did in all his mail to me, “Siempre, Bob.” Always.

The people I met and knowledge I gained from working with Bob Torres have stayed with me all our Navy life. Some of my closest friends were made during my time spent as editor and when we moved back for our second tour, it felt like coming home to family. We spent our first night back in Corpus on the pier with Bob, watching the sun set and drinking a beer, catching up on the four years we had spent apart. I soaked in how absolutely blessed I was to have this camaraderie with a former boss. Through the stresses of a tiny newspaper job, I learned a wealth of information on the Navy’s inner workings and always felt like I had one foot in the door of most conversations where others could be left out.

This is the part where my heart starts to hurt. Bob suffered a few strokes earlier this year and I could hardly believe the scene that was unfolding. My boss, this strong, charismatic man, the man who had helped me become a confident professional in a foreign world, who had unknowingly given me the tools to make it through all the future duty stations and the challenges that would come, was sick. He worsened quickly and passed away on September 10. I still can’t believe he’s not at his office, laughing with someone, frustrated over 600 unread emails, photographing a reenlistment, trying to figure out his next hunting trip. There’s not a time I drive on base when I don’t think of dropping by his office, only to have my stomach turn at the realization that he’s not there.

The newspaper granted me the privilege of covering dozens of Naval ceremonies: Changes of command, reenlistments, awards presentations, retirement ceremonies, wingings. And every week my paper came out, there would be uniformed men and women, smiling at the camera, shaking the hand of someone they respected, proud of their accomplishments. To a regular newspaper, this could probably get a little old. Same pictures, same ceremonies. But behind the uniforms are individuals who are selflessly serving their country and serving you, asking nothing in return. Every honor that is bestowed upon them is earned through a sacrifice that is so personal, I would consistently fail trying to capture it in words. So I ask this, if you see one of those black Vietnam caps, if you see active duty servicemembers, or if you see American flags line the graves of our departed veterans, remember that none of it is uniform. Each one of those people has a story. And one in particular is a Devil Dog who meant the world to this southern girl. Siempre.

PHOTO CAPTION: When the renovated fishing pier opened on base, it seemed only fitting that we, as media representatives, did our own research in order to provide a more accurate description for the fishermen. Here is Bob in his natural setting, enjoying sunrise at the Marina Pier aboard NAS Corpus Christi in 2007.

Anne Booher is a Navy wife of eight years, mother to a beautiful young lady, graduate of the University of North Carolina at Chapel Hill, and although her family is currently stationed in Texas, she has yet to figure out her stance on brisket.