The much-anticipated August 21, 2017 total eclipse of the sun – with the sun being completely blocked out by passage... 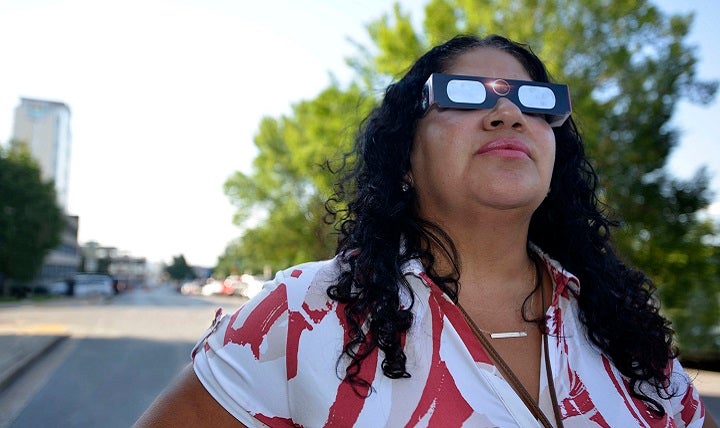 The much-anticipated August 21, 2017 total eclipse of the sun – with the sun being completely blocked out by passage of the moon – will be initially visible in Oregon and continue across North America to South Carolina. This will be a spectacular sight, but caution should be taken to keep your sight.

Staring – even squinting – at the sun can cause serious damage to a person’s eye. Ophthalmologists strongly recommend to everyone that they avoid looking directly at the sun during the upcoming total eclipse. Sight safety is an awareness they continually emphasize to everyone.

According to the American Academy of Ophthalmology in association with the American Astronomical Society, staring at the sun during the total eclipse for even a short time without wearing the right eye protection can permanently damage the retina.

“There is no treatment from getting such eye damage. It affects clarity of vision and even reading from a distance. Prevention is the key,” stressed Hessert, acknowledging that the upcoming event is certain to attract more than its share of curiosity sight-seekers.

On the day of the eclipse if the sky is clear, most will be able to see a partial eclipse lasting two to three hours. Anyone within an approximate 70-mile-wide path from Oregon to South Carolina referred to as the ‘path of totality’ will experience the total eclipse. At that point, the moon will completely cover the face of the sun for up to 2 minutes 40 seconds and there will be total darkness.

“Unless you travel to Oregon, you will be viewing a partial eclipse, which is still just as damaging without the proper eye protective wear. If a person is in the area where the sun is completely covered by the moon, they can view. But never during any of the partial phase from anywhere,” Hessert said.

The moon will gradually block the sun from view. Once the sun is covered, the light of day will become deep twilight. The sun’s outer atmosphere, called the solar corona, will then slowly appear like a halo around the moon in front of it. Bright stars and even planets will become more visible in the sky.

“Here in Washington, we will only experience a partial eclipse. At no time during the event will it be safe for us to look at the sun without eclipse glasses,” added Navy Capt. John Hardaway, of NHB’s Ophthalmology & Refractive Surgery.

There is only one safe way to look directly at the sun, whether during an eclipse or not and that is with special-purpose solar filters. These solar filters are used in “eclipse glasses” or in hand-held solar viewers. They must meet a very specific worldwide standard known as ISO 12312-2.

Hessert and Hardaway both stress that ordinary sunglasses, even dark ones, or using homemade filters, are not safe for looking at the sun.

“Regular sunglasses do not block enough light to prevent the sun from burning the eye. Even very dark sunglasses are not nearly dark enough. Eclipse glasses are very dark. So dark that you can’t see anything at all through them unless you are looking directly at a bright source of light,” Hardaway explained.

The American Academy of Ophthalmology and American Astronomical Society also suggest the following steps to safely watch the total eclipse:

That old adage that a person can go blind from looking at an eclipse isn’t an easily ignored myth. It’s a sight safety warning because a person could get solar retinopathy, a form of blindness.

“I would not call this a myth. The sun is always incredibly bright. Even when partially occluded by the moon, the sun is too bright to safely look at,” concluded Hardaway.