By Rebecca Alwine Yesterday was a trying day. The kids woke up early and it was early release. The laptop... 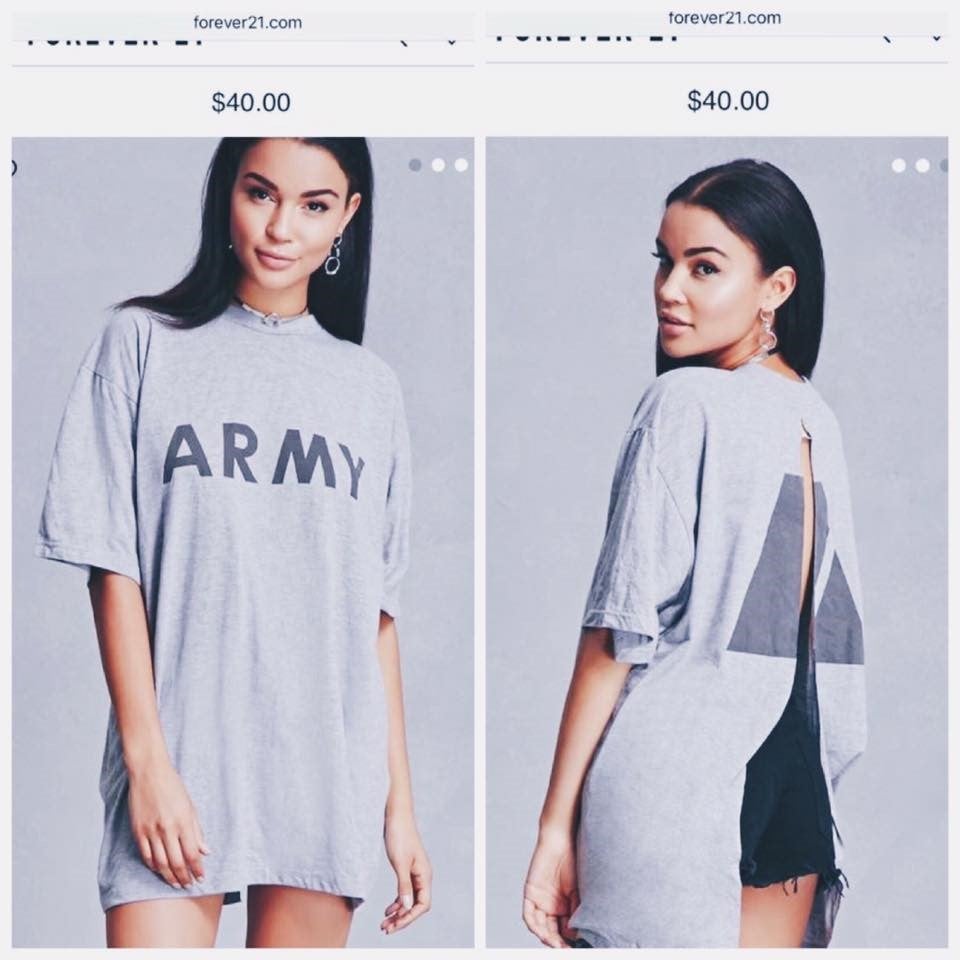 Yesterday was a trying day. The kids woke up early and it was early release. The laptop wasn’t working and I really didn’t want to do anything. And then, midway through my afternoon, the local wives’ page started hopping.

You see, clothing store Forever 21 has some new products for sale. . . the military wives just couldn’t believe their eyes. You’re not going to believe it–and you’re probably not going to run to the store, either. Here’s a peek:

Let that sink in: $40 for this outdated, cut up, Army gym shirt. You know, the one who you still have on the closet floor because the wear-out date is later this year. The one that you may have donned for a variety of reasons in the comfort of your own home and maybe when running to Walmart in the middle of the night.

But as a dress?

There’s a cross between disbelief and anger. . . with a little bit of jealousy thrown in. After all, my first thought was “Why didn’t I think of that?”

Army wife Robin agreed with me: “With all the old ones my husband has I could make some serious cash selling them for $40!”

Former soldier and military spouse Erin was shocked. She couldn’t even imagine someone wearing it. And cannot believe people would pay $40 for it.

While we were giggling over the ridiculousness (and ugliness) of the line, we were also figuring out ways to make it better. The conversation continued far into the night. One wife said she has some complete with pit stains and holes–she thought that would add some extra charm.  Another thought that a PT belt tied into a bow right at the small of the back would be worth at least another $20.

It was refreshing to see the conversation continue. Wives were thoroughly enjoying this conversation, no one (except the designer) was getting picked on, and we were united. Never once was the “D word” dropped, never once was a wife ridiculed. It was wonderful.

And it got better.

Suddenly we all became wanna be DIYers. “Grab your scissors and save your money!” one wife posted.

You know, there is something cute about a t-shirt dress in dark green. Or dressing your kids in camo for photos. But wearing this stuff? No way. Absolutely not.

I know you’re thinking: It’s not so bad, right? Just some PT shirts repurposed. And I haven’t shopped in Forever21 since, well, never. And I’ve heard they are having some problems paying the bills and are closing some stores. Including the one where I live.

Then it crossed a line.

(Update, May 6, 12:07 AM: It has come to our attention that this photo is not a direct screenshot from the Forever 21 website but a screenshot of a widely circulated screenshot that could have been altered.)

The implication seemed to be that we’re all barracks bunnies, who just flounce from soldier to soldier. We don’t have serious relationships. . . it’s all about sex. And, let’s imply that all service members are male and all they want from women is sex. Let’s insult women  by inferring they only wear things because it would make a man happy.

Y’all, there are so many things wrong with this line.

In case you’re wondering what service members think of this line? Well, it’s not pretty either.

I do want to leave you with one helpful tip I’ve learned from 10 years of being a military spouse. These–believe it or not–are not bracelets. But they do make excellent emergency hair ties. We’ll be expecting them to show up in Forever 21’s accessory section soon.