They’re not there to “decorate graves.” That’s what Karen Worchester said of the day Americans join her organization to place... 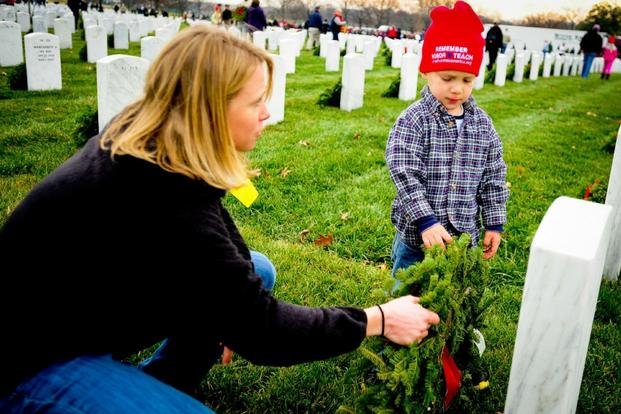 They’re not there to “decorate graves.”

That’s what Karen Worchester said of the day Americans join her organization to place wreaths on the headstones of those laid to rest in the nation’s national cemeteries.

“A person dies twice: Once when they take their final breath, and later, the last time their name is spoken. When we lay wreaths on veterans’ graves, we say their names … We’re here to remember not their deaths, but their lives,” she said on the Wreaths Across America website.

December is ripe with fun traditions for families. Whether you remember to move the elf on the shelf, spend hours cookie decorating, sing carols or string lights, ’tis the season to create lasting memories with the people you love the most.

But this year, you can take a few hours to go beyond the baking and do something not only memorable, but honorable: Participate in Wreaths Across America (WAA).

Since 1992, volunteers have donated money and time to purchase and lay wreaths at the graves of the fallen at Arlington National Cemetery, and now, some 1,200 other cemeteries participate as well. WAA’s mission is straightforward; their purpose moving: “Remember. Honor. Teach.”

That means there are 1,200-odd other locations nationwide where, on December 18, you can take a break from the hustle and bustle of the shopping and the spending and the constant feeling of busy, and be still alongside thousands of other volunteers around the world.

Take your family. Find a participating cemetery in your area and take your family. Live their motto, “Remember our fallen U. S. veterans, Honor those who serve, and Teach your children the value of freedom.”

You don’t have to sign up or do anything special. You just have to show up and help.

Bre Kingsbury, whose husband served as a Navy SEAL, was so moved by the tradition that several years ago she started her own fundraising efforts, specifically for Section 60, where many of their friends have been laid to rest.

Kingsbury said the first time she attended she was overwhelmed with emotion. “Seeing kids wearing Santa hats, laying wreaths on their daddy’s grave … parents, spouses, children of the men and women we’ve lost. It’s just so humbling. I feel called to this cause as I’ve been given way more than I deserve. With ten combat deployments my husband has had so many close calls. There is really no reason why he’s not buried there when so many of our friends are.” Kingsbury’s “Team Bear” has raised tens of thousands of dollars for wreaths over the years. Among the team members, they have over 25 friends buried in Section 60.

If there’s not a participating cemetery near you, find another way to get involved by donating a wreath for $15. WAA is still short 2,782 wreaths in order to cover the 246,700 veterans’ graves in Arlington.

Those fifteen dollars are the best you’ll spend this holiday season. Kingsbury shared, “It means so much to these families. One of the wives told me that their trip to Arlington used to be so sad, but now it’s their way of celebrating her husband’s life. So many families look forward to this event all year long. It helps them heal. It helps them handle the holidays, which is already a tough time.”

Presents will be unwrapped and soon set aside. The gingerbread houses will crumble, and even your elf will head back to the North Pole.

But long after this holiday season, that feeling of taking place in something bigger than yourself that you’ll experience when you walk the rows with wreaths … that feeling will endure. Whether you’re able to attend in person or donate a wreath (or both!), don’t miss this sacred holiday tradition. I promise it’s one you and your children will forever treasure.