MilitaryOneClick, National Military Family Association along with an army of military spouses and veterans are storming Capitol Hill today to... 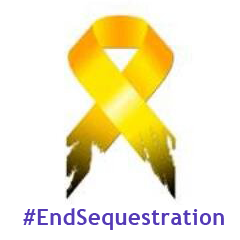 MilitaryOneClick, National Military Family Association along with an army of military spouses and veterans are storming Capitol Hill today to hand deliver a report to urge members of Congress to end sequestration immediately, otherwise the DoD will have to find $52 billion in additional cuts in 2014.

MilitaryOneClick, National Military Family Association, Macho Spouse, Military Partners and Families Coalition, Military Spouse Magazine and Spouse Buzz along with an army of military spouses and veterans are storming Capitol Hill today, September 12, 2013 urging Congress to end sequestration. These organizations asked families to share their stories and photos of how sequestration is affecting them and this report will be hand delivered today by these volunteers to all members of Congress.

According to Joyce Raezer, Executive Director of National Military Family Association, “This summer’s disruptive furloughs only saved $1 billion. Next year, DoD will have to find $52 billion in savings if sequestration continues. How much more pain will that bring?” This report shares shocking testimonials about the difficulty in getting medical care, severe reductions in training for service members, last minute changes in deployment schedules and the list goes on. “I don’t think America realizes that our service men and women can’t go on TV or do an interview about the devastating effects of sequestration on readiness. They are not allowed. This is why we are storming Capitol Hill today; if we don’t try to stop it – who will?”, said Jennifer Pilcher, Military Spouse and Founder of MilitaryOneClick. Sequestration also hits our civilian community hard and weakens our national security. Due to sequestration spending cuts, 84,000 pounds of cocaine are coming into the US because military ships and planes are not available to intercept the shipments. There’s over 70% of cancelled naval ship maintenance in private ship yards as well as 100% of cancelled naval aircraft maintenance. “Sequestration is illogical, but it is the law,” according to General Martin Dempsey, Chairman of the Joint Chiefs of Staff. “We are here today to urge Congress to change this illogical law. As we have all witnessed recent events with Syria and beyond, we need our military stronger than ever to protect us and sequestration is tearing it apart piece by piece,” according to Pilcher.

View the complete report and photo book being delivered to Congress on September 12, 2013: Sequestration Photo Book.

These organizations are encouraging people to sign the on-line petition to end sequestration at: http://milspousefest.wpengine.com/petition-to-congress/