Thank you to Sarah Peachey for this thoughtful article!             If you’re a military spouse and have experienced hardship while... 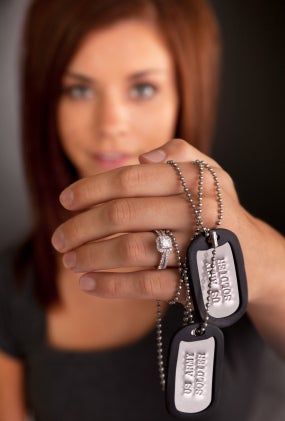 Thank you to Sarah Peachey for this thoughtful article!

If you’re a military spouse and have experienced hardship while attempting to expand your career, you aren’t alone. More than 55 percent of military spouses have indicated that it was difficult finding their current or most recent job. You may recall MilitaryOneClick posting a link to an employment survey on their Facebook and web pages. Well, the results are in. The Military Officer’s Association of America and the Institute for Veterans and Military Families at Syracuse University announced the results of a national study focused on military spouse employment. The results reveal that plenty of military spouses face employment troubles. The survey, released on Feb. 12, focused on active duty spouses and found that more than 90 percent were underemployed, which means that their education and experience surpassed what was needed for the open position.

That’s a huge number. Respondents reported being underemployed with respect to education (33 percent), experience (10 percent) or both (47 percent).

So who are these spouses and what are they like?

According to the survey, “the average military spouse is female, 33 years old, has some college or earned a bachelor’s degree and is more likely to have children in the home. She is less likely to be employed and makes more than 38 percent less than her civilian counterpart. Her service member has been deployed on average a total of 24 months.”

So what’s the problem? If spouses are educated, what makes the job search so difficult?

The survey found that the employment results are not due to a lack of desire to work. Plenty of respondents said that they “need” to work (55 percent) or “want” to work (90 percent). For many, the military sets a tough scene for spouses. “Active duty military spouses are more likely to have moved within states, across states, and abroad, compared to their civilian and veteran counterparts. The increased likelihood of moving from one geographic location to another further compounds economic issues for Families,” the survey said.

The survey also said that many other factors affect military spouse unemployment or underemployment, which include “relocating to geographic locations with limited employment opportunities, employer perceptions of military spouses, inability to match skills and education to jobs, inflexible work schedules and high child care costs.” At least 79 percent of respondents made at least one PCS move across state lines or abroad in the past five years.

But does all that education provide a return? The survey found that income levels between military spouses and their civilian counterparts vary greatly. Civilian employees that have moved in the past year and have children under the age of 5 at home make an average of $37,757. Armed Forces spouses with the same number of moves and children make, on average, $22,375. Since that doesn’t compare education levels, let’s put it in perspective. According to a September 2013 National Association of Colleges and Employers survey, the average bachelor’s degree recipient earns an average salary of $45,327. The MOAA and IVMF survey found that military spouses with a bachelor’s degree earn an average of $23,615. That’s a significant gap. With a doctoral degree, military spouses can earn an average of $46,913 — only about $600 more than a civilian with a bachelor’s.

Some spouses don’t only require a degree to obtain a job, but also a license. More than 50 percent of respondents indicated their chosen career field requires licensing or certification, and 73 percent require renewal or reissuing after a PCS move, costing an average of $223.03. That is also an out-of-pocket expense that can happen multiple times throughout a service member’s career.

Unfortunately, employment hardships have made some respondents decide to forgo a career. Here are the top five reasons military spouses aren’t working:

• I could not find work that matched my skills or education level (28 percent).

• I want to be able to stay home to care for my children (11 percent).

• I have child care problems, such as the expense or lack of availability (11 percent).

• I am preparing for or recovering from a move (10 percent). Is an affiliation with the military part of the problem? More than 85 percent indicated that, in general, it is difficult for military spouses to get hired. The reasons vary, but many claim employers want to permanently fill open positions, not worry about needing to refill the position in 1-3 years. While the military provides resources during and after a military move, only 7 percent said they received resources on employment opportunities.

The military may not offer as many employment resources spouses hope for, but some private organizations are willing to help. For a list of employment assistance resources, visit http://milspousefest.wpengine.com/job-board/ and check out the tools and other resources available for you.

Sarah Peachey is a 20-something journalist from Pennsylvania, finally back in the Mid-Atlantic after voyages to the Deep South and Southwest. She lives with her husband, infant daughter and two furbabies. She began a career in journalism with The Fort Polk Guardian, an installation newspaper, winning three state awards for her work, and now freelances for military spouse support sites. She is an active blogger on MilitaryOneClick and her blog, “Stetsons, Spurs and Stilettos.” She enjoys spending her days on the shooting range or at home with a good book. She considers herself a bookworm, pianist, wine enthusiast and artist.