Taking a chance on “The Love Dare” 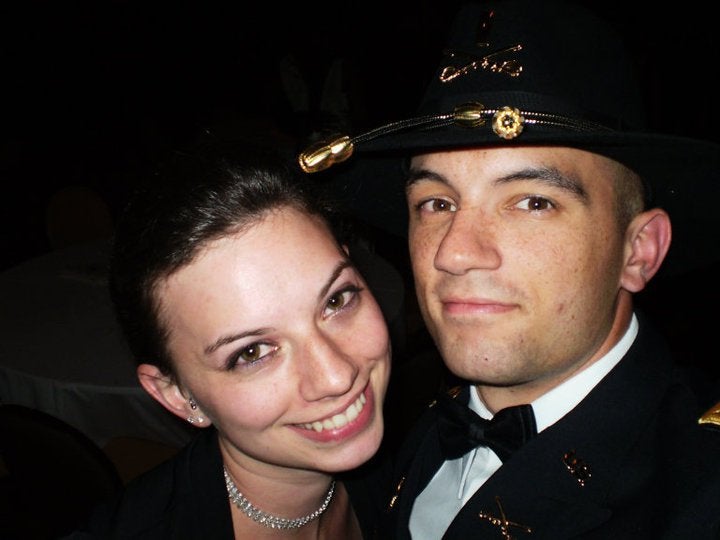 Thank you for opening your heart to us, Sarah Peachey

I’ve been married for about four and a half years. With a yearlong deployment, a year and a half of temporary duty, plus our recent addition of a two-month old baby, my husband and I have faced our fair share of challenges in our relationship. Just like any other marriage out there, we’ve had both good and hard times.

I’ve always enjoyed picking up the different marriage support books out there, such as “His Needs, Her Needs” (which I highly recommend) and “Fighting for Your Marriage.” Both provide great lessons that anyone can instantly apply to their personal lives. “The Love Dare” has been sitting on my bookshelf, collecting dust for the past two years. I kept saying, “Oh, I’ll pick it up sometime.” After all, we’re so busy.  I didn’t think we’d have the time to work together on the Dares.

It has been pretty crazy in my house lately. My husband is attending a six-month military training school in Arizona while also working on his Master’s degree (which is almost done!). I spend all day and most of the night changing diapers, dealing with spit up and learning how to be a parent to our infant daughter. While our evenings used to be spent talking about each others’ days and cuddling on the couch before bed, we spend a lot of time in separate rooms on separate floors of the house, sometimes only spending dinnertime and bedtime together.

I was scratching my brain for a new blog series on my personal blog, “Stetsons, Spurs and Stilettos,” when my eyes fell on my bookshelf. A brown book was lying on its side. I walked over and saw the title — “The Love Dare.” As I picked it up and flipped through the pages, I couldn’t help but wonder: How hard could the Dares be, and would I be successful? “The Love Dare” is a 40-day faith-focused series (thought it could easily transfer into the secular scene) steeped in the idea that focusing on love in all aspects of a marriage can lead to fantastic results. The series stretches from the positives of relationships like love and kindness, down to the difficult parts like irritability and jealousy.

Often times we’re toughest on our spouses, but yet aren’t as open and honest with them as we are with our friends. We’re too nervous to bring up the problems we may be facing and choose to either go it alone or ignore it, neither of which make any improvements. And every relationship out there has its problems. If you think you don’t, you’re probably ignoring them.

The challenges range from very simple, such as asking your mate about their day, to the difficult, like asking your spouse what three things about you bother them. I’m seven days in and so far, the Dare has forced me to face my own shortcomings, placing no blame for any of the issues on my husband. It forces you to face your own shortcomings, rather than trying to blame your mate. Have you ever suffered from the same issue over and over again, each time trying to solve it and believing you finally have, only to have the problem return? This series will destroy that routine. This will be a new weekly series on MilitaryOneClick. Each week, I will summarize the seven Dares and describe which I found most difficult and how I overcame it. I plan to be completely open and honest with the 40-day journey. I know it won’t be easy for me (the first day was all about patience, which I tend to have very little of lately), but I want to discuss my challenges. Maybe you have some of the same challenges and aren’t sure how to change them or transform them into positives. Of course, you don’t need to learn anything from what I write, but maybe it will inspire you to go on your own 40-day journey and examine how your own relationship could improve.

Because really, it couldn’t hurt.

Sarah Peachey is a 20-something journalist from the northeast, living in the Southwest near Fort Huachuca, AZ with her husband, two furbabies and infant daughter. She began a career in journalism with The Fort Polk Guardian, an installation newspaper, winning two state awards for her work, and now freelances for military spouse support sites. She is an active blogger on MilitaryOneClick and her blog, “Stetsons, Spurs and Stilettos.” She enjoys spending her days on the shooting range or at home with a good book. She considers herself a bookworm, pianist, wine enthusiast and artist.

To read all of Sarah’s awesome blogs and get a peak at her new sweet baby, click here.