These Army-Navy traditions are awesome even if you hate football

Let’s be honest: The Army-Navy rivalry isn’t for everyone. I know plenty of folks who don’t follow football (trust me,... 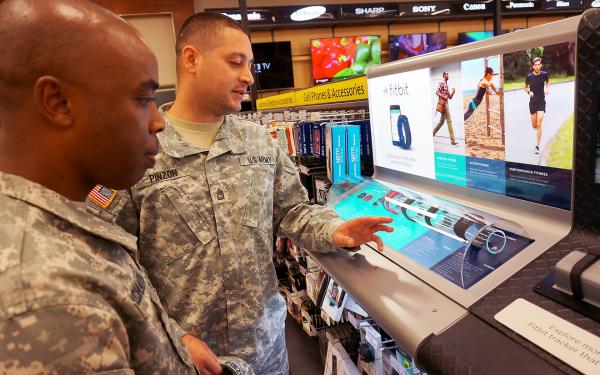 Let’s be honest: The Army-Navy rivalry isn’t for everyone. I know plenty of folks who don’t follow football (trust me, they’re out there!) or who don’t feel a connection to either academy. And then there are the military families with graduates from other powerhouse football schools and just don’t get excited about America’s Game.

In fact, when my husband and I attended the match-up for the first time a few years ago, we weren’t expecting to get too excited over it. I attended for work and my enlisted sailor husband was my plus one. We had both graduated from a major university with a thrilling football program and just didn’t have any personal connections to either academy. We were going just for fun–without any real skin in the game.

But there’s something special about the competition, even if you don’t particularly like football, care about the academies, or cheer for either side. We found ourselves getting excited over the pageantry and traditions from the get-go.

Because Army and Navy both send their entire student bodies to the game, they take the time to show off the best parts of each academy. During the March On, each company and its commander are announced and then take the field until the entire gridiron is filled. That’s almost 9,000 midshipmen and cadets celebrating the game and their commitment to the Constitution.

That’s right: The game begins with a prisoner exchange. It might sound grim, especially with the connotations, but it has much friendlier roots. . . believe it or not. During the fall semester, West Point an the Naval Academy swap some of their students– think of it as an exchange program– so that each side engenders respect and a better understanding of what the respective branches do. During the Army-Navy Game, those who have been experiencing the “culture” of the other side ceremonially cross the field, temporarily released to their alma mater and their friends.

President Theodore Roosevelt is credited with starting perhaps the most prestigious tradition for the Army-Navy game: The attendance of the President of the United States. Careful not to show favoritism, the Commander in Chief spends half of the game on the Army’s side and the other half on the Navy’s side– another tradition that Roosevelt began.

Here’s a very early film of Roosevelt crossing the field at halftime and doffing his hat to the crowd:

Harry S Truman attended seven games while we was in office and is the only president to not switch sides during halftime. (He did switch the side he sat with every year.) He also holds the records for most appearances at the Army-Navy game while in office.

And Dwight D. Eisenhower is the only president to have actually played in the Army-Navy game. He was on the football team for Army until he broke his knee while tackling Jim Thorpe.

Every year, each academy releases student-produced spirit videos. Some have earned their place in storied history (War Tubas, attack!) and others are hilarious (We don’t give a ship). It doesn’t matter which side  you’re rooting for– everyone enjoys the unveiling of new spirit spots.

Because the service academies understand that there are more important–and bigger things than football– the tradition of “honoring the fallen” helps to engender respect for the losing side. After the game ends, the winners of the contest join the other team and sing the defeated team’s alma mater together with the fans.

The City of Brotherly Love

It fits that one of the most historic games in America is played in one of the most historic cities in America. While the game has occasionally been played at other places, Philadelphia is truly the home of the Army-Navy game. The game was cancelled for five years during the late 1800s after several bloody fist fights and an almost-duel between two service members caused President Grover Cleveland to convene his cabinet. The cabinet decided to force each academy to only play home games–effectively bringing the contest (and its shenanigans) to a temporary end.

Philadelphia was considered a neutral point where the two teams could convene and play each other after the contest was renewed. In fact, the Army-Navy game has actually only been played at the home stadium of either academy six times in 117 years.

In more recent years, the competition has been played in Baltimore, Chicago, Pasadena, and New York City metro area. In the coming years, the game will be held in Philly from 2018 t0 2020, as well as 2022. In 2021, it will be played at the MetLife Stadium in East Rutherford, NJ as a tribute to the 20-year anniversary of September 11.