These vets climb a mountain in Alaska to honor fallen colleagues

It’s not that there aren’t other mountain peaks to climb near Anchorage, Alaska. But for Army veteran Kirk Alkire, only one really... 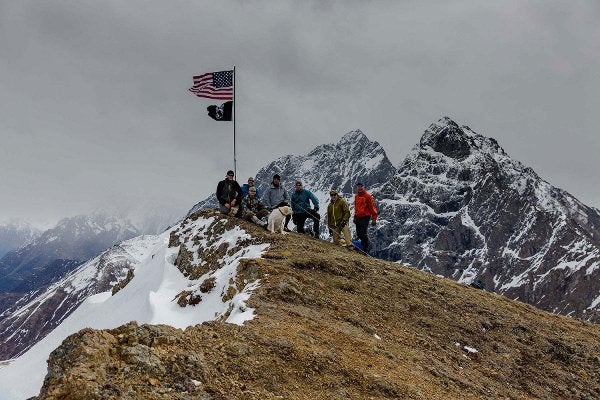 It’s not that there aren’t other mountain peaks to climb near Anchorage, Alaska.

But for Army veteran Kirk Alkire, only one really matters: Mount POW/MIA.

Part of the vast Chugach mountain range in southern Alaska, the ascent to the peak from nearby Eklutna Lake Road has no marked trail or trail head, no trail maintenance and no parking area.

Still, Alkire has made it his personal responsibility to ascend the mountain multiple times per year to keep fresh the POW/MIA and U.S. flags that stand at the mountain’s gusty summit.

He makes the climb in part to honor members of his former Army unit — 2nd Battalion, 377th Parachute Field Artillery Regiment, 4th Brigade Combat Team (Airborne), 25th Infantry Division — who were posthumously awarded the Prisoner of War Medal after they were abducted and killed by Iraqi insurgents in 2007.

“We do it for the big time days — Memorial Day, Veterans Day, POW/MIA [Remembrance] Day,” he said. “We normally nail it on those specific days, and whenever else we’re just out and about and think, ‘Today’s a good day to hit it.’ We just do it.”

Designated as Mount POW/MIA by the U.S. Geological Survey in 1999 in honor of prisoners of war and troops missing in action in past and future U.S. conflicts, the mountain stands more than 4,000 feet high and is surrounded by other peaks, including nearby Pioneer Peak, which is over 6,000 feet high.

From entrance point to summit, the unmarked POW/MIA trail gains 3,000 feet over 1.5 miles — a difficult haul that would test even the fittest hiker.

Late snow and overgrown brush can make the trek very challenging, and local hikers are advised to bring extra gear due to high winds and rapidly changing weather.

None of that keeps Alkire away. If anything, he said, the uncertainties make the hike better.

“We never run into anybody except sheep and goats up there,” he said. “That is another piece of it that makes it so unique and special. It is so beautiful up there in all directions. No matter which direction you look standing on that summit, it’s just gorgeous. To me, it’s a great secret.”

Alkire retired from active duty in 2008. He is now the deputy chief of protocol for U.S. Army Alaska, which is based here.

Alkire sees replacing the summit POW/MIA and U.S. flags as an honor — and he’s not alone.

The base exchange and a local Lowe’s store have stepped in with flag donations to make sure Alkire always has a fresh set of flags ready. High winds on the POW/MIA summit mean they are in constant need of replacement.

“We’re a part of the community, and most of us are vets as well. We support things like this,” said Ray Stewart, the Army and Air Force Exchange Service general manager here. “Whenever he needs a new flag, he comes up and visits, and we get him one from clothing and sales.”

Replacing the flags on the mountain is also a group effort, Alkire said. He makes most of his hikes with a group of other veterans or locals, and has been known to hike two days in a row just so that everyone who wants to go with a group can do so.

This year, after discovering problems with a box on the summit that contains a logbook, the team made a repeat climb with a sledgehammer, rebar and waterproof ammo can containing a new logbook — about 30 pounds of gear, Alkire said.

They also added a set of photos and information cards in honor of the troops captured and killed in Iraq.

“I love that mountain. To me, in my personal opinion, it is the most rewarding and scenic climb,” he said.