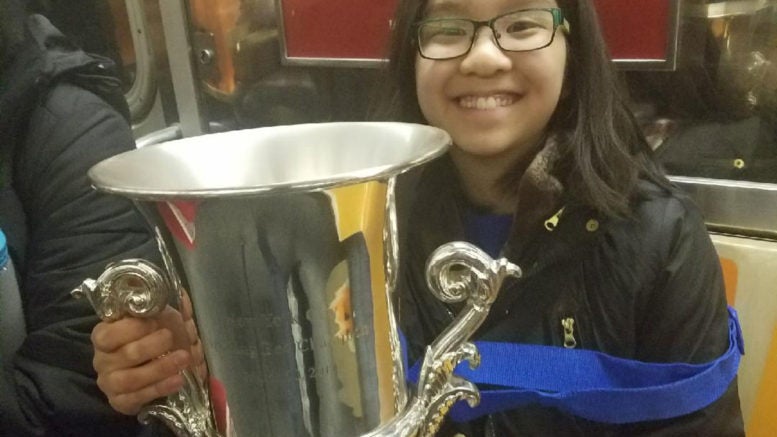 Going in to the Daily News competition, not only did Ella not expect to make it to the national-level competition, famously broadcast live on ESPN and the subject of the award-winning documentary Spellbound, she didn’t expect to make it past the first few rounds. Instead she walked away with a huge trophy and a spot for the D.C. competition when the runner-up tripped over the word “hippopotamus.”

“We were just there casually,” said Elizabeth Espiritu, Ella’s mom, who had stayed up late the night before helping one of her older daughters with a school project. “I’m embarrassed to say I was kind of nodding off at the beginning. I was alert when her turn came up. She got further and further, and as she passed more and more rounds … We weren’t expecting anything so that was amazing.”

Ella, too, was surprised by her success.

“It was kind of scary,” she said. “I didn’t really expect to win or anything. We just showed up because we had to.”

Ella, her parents and her three siblings are stationed at U.S. Army Garrison, New York. Ella has moved six times and attended a variety of schools, including home school, her mom said.

But she doesn’t study spelling.

“I read a lot,” she said. “I did the school spelling bee back in Germany — but mostly I just read. It’s easier to sound it out and visualize it in your head.”

Ella said her favorite genre is “fictional adventure” but doesn’t have a favorite book, series or author.

Ella’s mom said she doesn’t love the attention winning has brought, but is looking forward to the trip to D.C. in late May for the next competition. The family has been stationed there before, so there’s nothing there that Ella is particularly looking forward to seeing, she said.

Although at the time of this writing the spelling bee TV schedule isn’t out yet, you should be able to find it here on ESPN later.