This veteran-turned-milspouse is opening a gymnastics academy… in Germany

Hopping from FOB to FOB on a helicopter became a way of life for Public Affairs Specialist Andrya Silberman when... 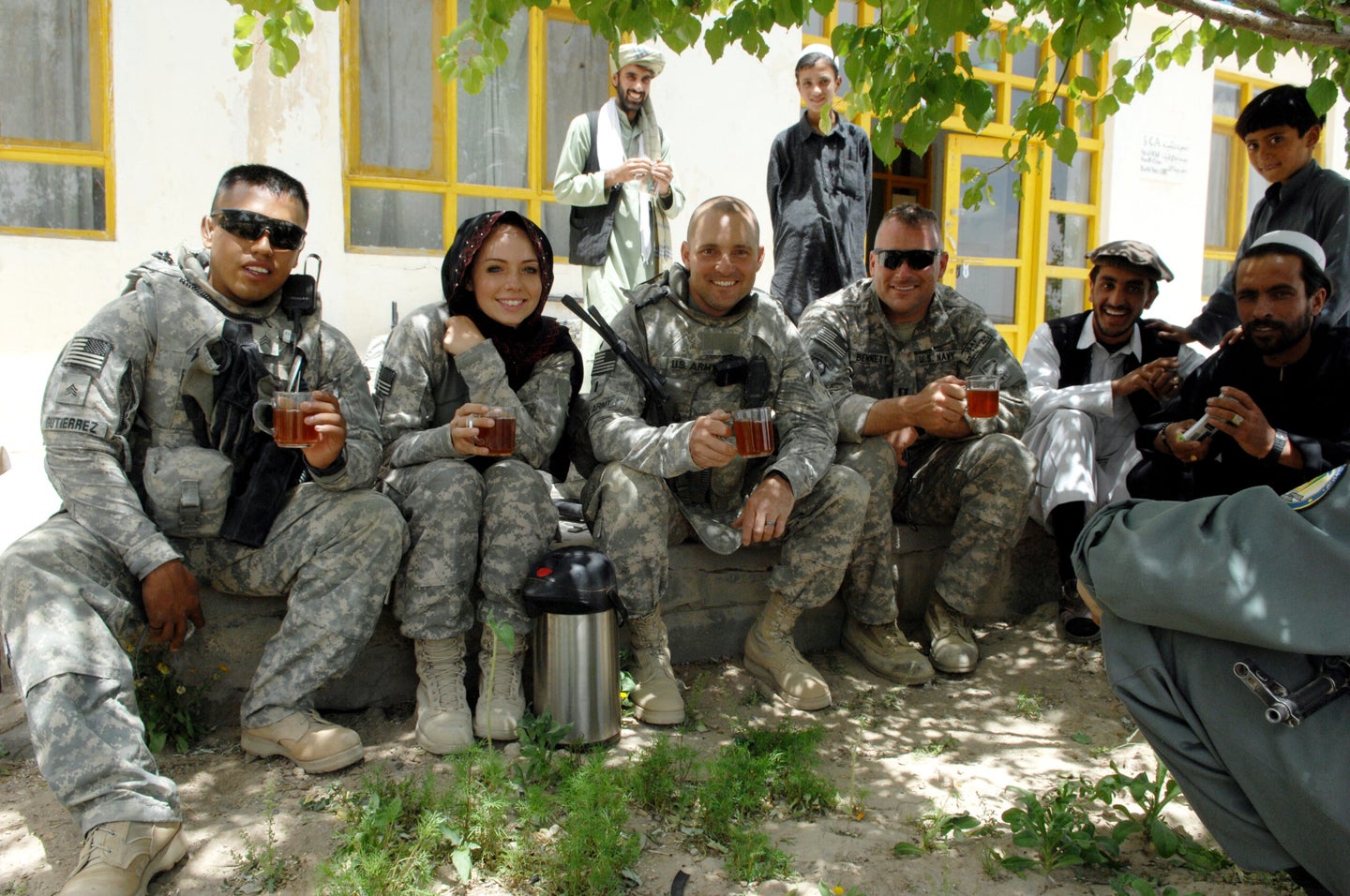 Hopping from FOB to FOB on a helicopter became a way of life for Public Affairs Specialist Andrya Silberman when she was deployed to Afghanistan with her airborne brigade.  Silberman spent a year following her unit behind the lens of a camera, documenting “her guys”, as she affectionately calls them.

She covered every type of mission imaginable, from quality checks on local building projects, to raids searching for Taliban, to meetings with Afghan tribal leaders, to ambassador briefings, to days-long combat outpost set-ups.  There were some more unique missions as well, like flying around with a small group of New England Patriots cheerleaders to boost soldier morale.

Silberman even accompanied multiple search missions for captured Soldier Bowe Bergdahl.  Although this incident has been made famous in the media, the moments that she remembers most are much smaller in comparison.  “I listened to great men and women laugh, cry, and rage, and witnessed all the strength, courage, and kindness, that exists in the worst possible situation.” She adds, “It was one of the best, and certainly the most enlightening, phases of my life.”

Fast forward several years and Silberman’s life is still a whirlwind of activity and runs at the highest of op-tempos.  However, instead of jumping out of helicopters and avoiding rocket blasts, she has traded in her combat boots for the position of military spouse.  She and her husband, Tom, an Army officer, have five children. Silberman proudly proclaims, “No one is ever bored here, that is for sure.”  Her large family is currently knee-deep in the midst of an OCONUS PCS, all while she focuses on opening her new business, Gymfinity International in Kaiserslautern, Germany.

Having previously owned several small businesses, Silberman is realizing her life-long dream of owning her own gymnastics academy and is currently the owner, managing director, and, for now, head coach at Gymfinity International.

Like many other successful military spouse owned businesses, Gymfinity was born out of necessity.  When Silberman found out about their upcoming assignment to Germany, Silberman realized that it would effectively be the end of her daughter’s gymnastics career.  The local gymnastics academies in their new duty station’s area don’t have sufficient equipment or the amount of hours to train at her daughter’s level.  The only gym that could have accommodated her was an hour away and required her daughter to apply for German citizenship to be allowed on their competitive team.

Silberman’s husband joked about one more option that they hadn’t discussed yet: Opening the gym that she had always wanted.  She conducted a market analysis and discovered a huge need for a good gym in the Kaiserslautern area. Her research showed that families with advanced gymnasts often split up their families, declined assignments to Germany, or watched their children make peace with losing their strength and skills because there just weren’t the right level of coaching and equipment available.

Their family was already in love with Germany from their previous assignment there and Tom would be retirement eligible after this assignment. Her crazy dream was finally becoming feasible. She wrote a business plan and they took the leap; just a few months later, she was working with a business advisor and lawyer, knee-deep in German tax and business laws.

A Jill of all trades

As a military spouse, Silberman has had to reinvent her career several times.  She’s worked in accounting, owned several small businesses, written a travel and homeschool blog, and worked in public relations for a political campaign.

A former gymnast herself, she has also worked in 12 gyms across five states and three regions, coaching all levels from preschoolers through regional champions.  She’s been a gym manager and meet director, built two competitive programs from scratch, and became a USAG-certified judge after returning from overseas in 2013.

Kaiserslautern is home to 57,000 US military, civilians, and their families, as well as 100,000 local residents from 126 nations.  Gymfinity will take local and international athletes, and have an integrated training program to include the levels and specifications of the German gymnastics program as well. Silberman’s goal is to create a gym family where athletes can transition from their gym in America, continue to progress, and reintegrate into their gymnastics program when they return stateside.

As a gym mom herself, Gymfinity has a sibling/toddler play space, wi-fi, comfortable lounge area and, of course, coffee, all with an overhead view of the gym. “We want to make sure that our athletes and their families love to spend gym time at Gymfinitym,” explains Silberman. “I want military families to know that an assignment to Germany means a continuation of the progress and passion of their athletes, rather than the end of it.”

Gymfinity International is currently accepting pre-registration for classes for the Fall 2017 Session.