This WWII vet is cooler than you

WWII veteran Ralph Osterhoudt, 91, is more badass than all of us combined. A veteran of the Battle of... 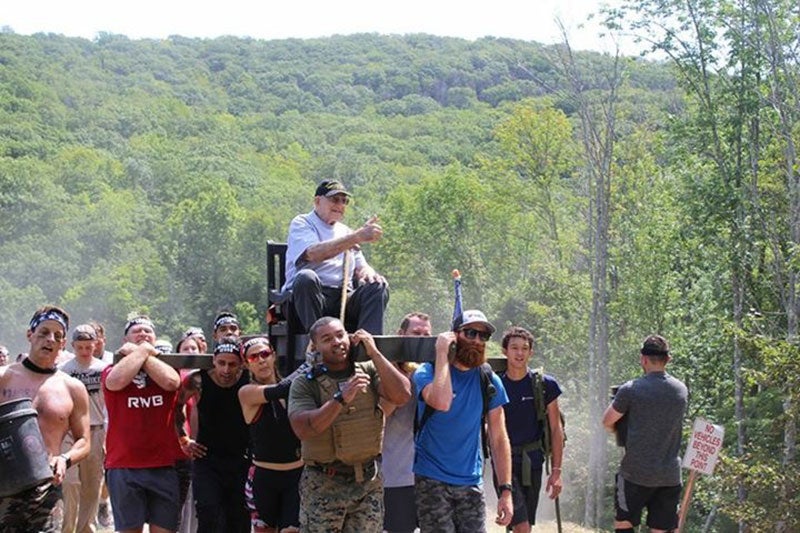 WWII veteran Ralph Osterhoudt, 91, is more badass than all of us combined.

A veteran of the Battle of the Bulge and Patton’s 3rd Army, then-PFC Osterhoudt fought Nazis. There are even pictures of young Ralph standing next to Hitler’s command car.

And on a sunny day in late August, about 300 people took turns hauling him four miles in a custom litter  — about 300 pounds of man and chair  — so that he could complete a Spartan obstacle race.

“I never had anything that I appreciated more,” Osterhoudt said during an interview with Military.com last week. “I was kind of heavy with the platform and everything, and it was just the greatest experience that I think I ever had.”

Michael Speed, founder of the small veteran non-profit Mended Swords, organized the event. He met Osterhoudt while working as a nurse at a VA hospital in New York, and the pair quickly developed a close relationship.

Speed, a retired Army reservist, Marine Corps vet and former member of the New York City Fire Department, founded Mended Swords so that he can help vets take names the way they did when they were in the service. Through Mended Swords, Speed has helped vets, typically younger than Osterhoudt, get out and do things like play paintball and attend West Point football games.

But Osterhoudt doesn’t like to be left behind. So when he asked to play paintball, too, Speed found a way to make it happen.

It was Speed’s idea to take Osterhoudt over the Spartan course. The chair, custom built by an NYC Fire Department friend, included a seatbelt so Osterhoudt would be secure. It is designed to be carried by a team of eight.

“It had a seatbelt in it, foot rest — we tried to think of anything that this man would need,” Speed said. “The only thing it doesn’t have is a cup holder.”

Originally, four members of the Mended Swords crew planned to carry Osterhoudt with a group of Marines running in honor of friends killed when Yankee 72 crashed in Mississippi early this year. That worked for about half the race. But then the two groups got separated, and Speed had to rely on the help of other racers to carry Osterhoudt the rest of the way.

It wasn’t hard to find help, he said. At least 300 people assisted them over the course, including about 70 members of a local Team Red, White & Blue chapter.

“I’ve completed a number of Spartan races and witnessed some truly inspiring individuals and teams on the course, but this, by far, was the highlight of them all,” said Amanda Rondon, who works for Team Red, White & Blue and was part of the group that helped during the race. “Ralph was smiling from ear to ear and even had his cell phone out recording the whole thing.”

Osterhoudt was carried over as many obstacles as possible on the 4.2 mile, 15 obstacle race. For others the team set the chair down and completed the obstacles without him. Race officials required Osterhoudt and his chair to skip one particularly steep part of the course, and instead transported him by vehicle to a pick-up spot. At the end of the race Osterhoudt and a team of racers walked across the finish line.

“I experienced a sense of community that I didn’t think existed anymore … a sense of humility and a sense that we could not accomplish what we did if people did not help us,” Speed said. “I cried four times during the race.”