To have and to hold (a job): Senator convenes summit on milspouse employment

On Monday, Democratic Virginia Sen. Tim Kaine convened a meeting of the minds to brainstorm ways to find jobs for... 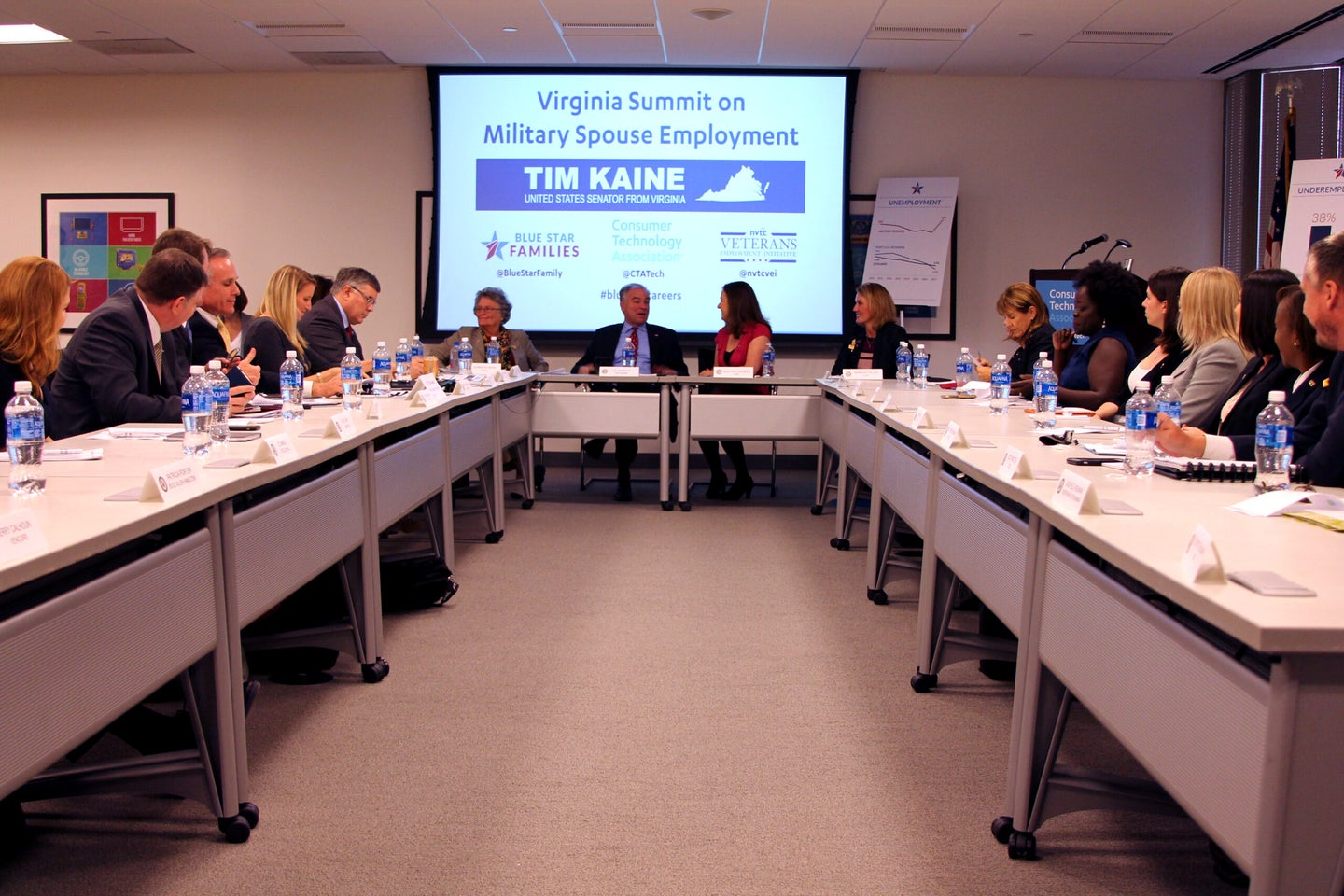 On Monday, Democratic Virginia Sen. Tim Kaine convened a meeting of the minds to brainstorm ways to find jobs for military spouses in his state.

The Virginia Summit on Military Spouse Employment united military spouses, private-sector executives from companies such as Booz Allen Hamilton, Northrop Grumman, Samsung, and Sprint, U.S. Department of Defense, and nonprofit leaders on a panel to discusses hurdles to education and employment faced by the husbands and wives of American service members.

The event also gave corporations the chance to get direct feedback about how to better market and tailor their specialized programs and general hiring processes to better meet spouses’ needs.  While an Amazon program that employs military spouses and veterans to specifically recruit active-duty military spouses for jobs was a stand-out among the offerings and initiatives, the idea of marketing specifically to active-duty military spouses–rather than just the spouses of transitioning veterans or said veterans–was new to some. Another innovative suggestion, which came via Northern Virginia Technology Council CEO Bobbie Kilberg, was to create pathways for military spouses to voluntarily identify themselves during the application process so that they could potentially receive special preference from hiring executives.

“The same way I’ve been grappling with veteran’s unemployment issues but hadn’t really thought about the military spouses until a couple of years later, you could hear some of the employers saying the same thing,” Kaine said in a post-event press gaggle.

In addition, spouses suggested how the DoD might do a better job of letting spouses know that education and employment resources exist.

“We gain 100,000 new military spouses into the military every year,” Eddy Mentzer, head of the Defense Department’s Spouse Education and Career Opportunities Program, told MilitaryOneClick. He said the DoD is consequently “always shooting from a deficit” when spreading the word about such initiatives.

Mentzer was was visibly excited while explaining its wealth of resources for spouses, such as the Military Spouse Employment Partnership and free career counseling available via Military OneSource, to concerned panelists. While advocacy is in his job description, his dedication to this cause hits home for a far more personal reason: He’s an Air Force husband who’s had to PCS and go on unpaid leave multiple times.

“We have to move spouse employment out of fine print,” he told the panel.

He told MilitaryOneClick that the family’s due for another relocation “sometime in the next year,” a situation that, ironically enough, will force him into the very unemployment he fights daily.

Many of the issues raised by spouse panelists, whose families serve across multiple military services, were related to PCSing. Some of these included need to justify single-year stints at past jobs as the result of relocation versus a lack of commitment, state licensure issues and the inability to start and finish the process of getting a security clearance before it’s time to move again. Others included difficulties in requesting promotions when previously low salaries reflect lower costs of living in different locales versus a lack of qualifications and career counseling whose direction can change from place to place due to differing levels of familiarity with a spouse’s educational and employment track record.

Hurdles unrelated to geography included a lack of part-time and/or flexible work scheduling and inadequate childcare options. Panelist Patricia Ochan, Marine Corps wife, Ph.D. student and aspiring politician whose career was sidelined when her husband was injured in combat, also shed light on the hiring bias against applicants who are forced to serve as caregivers.

“It has been really difficult going in and trying to explain to them what your role is and how this is really maybe just temporary,” Ochan told MilitaryOneClick, noting that the appearance of divided loyalties makes them unwilling “to invest in you.”

Kaine said the event came out of a challenge from Blue Star Families and Roth-Douquet to make the Washington, D.C. metropolitan area “a model region” for military spouse employment and then to see if lessons learned “could then be replicated elsewhere.”

“If you could do it in a region like this, then you could hopefully learn some things and take it to other regions, too,” Kaine told MilitaryOneClick.

According to Roth-Douquet, part of the inspiration behind the event was data. Blue Star Families asked the University of Utah “to do a study” investigating how military spouse unemployment and underemployment impact the nation’s economy.  “It came back that it cost the US economy about a billion dollars a year, every year, to have all of us underemployed and unemployed,” she told MilitaryOneClick.

While Kaine noted that the summit’s central problem lacked a quick fix, he was enthusiastic about the prospect of following up with event organizers to identify action items.

And after U.S. Army Gen. Gwendolyn Bingham, the service’s assistant chief of staff for installation management, raised military spouse unemployment as a factor in force readiness, he expressed interest in raising the issue with the Senate Armed Services Committee’s Subcommittee on Readiness and Management Support.

“This would be a perfect topic that we should put up for consideration; get Blue Star Families and look at some of these employers who are doing good work, get them in and let them share what they’re doing,” Kaine, the committee’s ranking member, told MilitaryOneClick.

And spouse panelists said the summit gave them concrete hope going forward. Mentzer said he was inspired by corporations’ willingness to change their strategies in response to spouses’ needs. He was especially impressed by their receptiveness to his point that veteran employment programs and military spouse employment programs aren’t synonymous. “It really gave me hope to hear how that resonated with all of the individuals around the table,” he said.

Carmen Emborski, an Air Force wife, Ph.D. student and panelist, said she was reassured by the awareness that other people care about and want to improve spouses’ situations. “They recognize that there is a disparity in the career path for military families, and there are a lot of people that care and want to make it better, and I think that we are on the right steps to make that happen,” she said.

Ochan agreed. “Today’s meeting was great because all the employers felt like they had learned something just by hearing our stories and everyone is like more open right now to looking at the spouses, caregivers, and trying to help us move forward,” she said.

The summit was held at the Consumer Technology Association’s Arlington, Virginia, headquarters.