To the POWs and MIAs…You Are Not Forgotten!

POW/MIA Recognition Day is a day of remembrance and hope for the safe return of American Prisoners of War (POW), and those still Missing in Action (MIA). 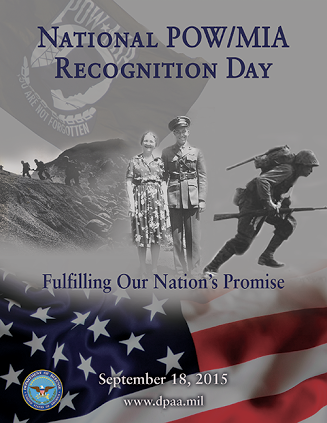 by Bobbi Pack from MyMilitarySavings

POW/MIA Recognition Day is a day of remembrance and hope for the safe return of American Prisoners of War (POW), and those still Missing in Action (MIA). It also seeks the return of the remains of fallen soldiers to their surviving family members.

The first official commemoration of POW/MIA was held on July 18, 1979. It was the result of resolutions passed by Congress. Over the next few years, it was held on different dates during the years, finally, in 1986, The National League of Families proposed the third Friday in September as a day to recognize and remember POW/MIAs.  This date was selected, as it is not associated with any known wars, each year, the President of the United States issues a proclamation on this day.

Did you know? Federal law requires the POW/MIA flag to be flown on the following days:

My family and I always take a few moments on this special day, to remember our missing soldiers, and those held as prisoners of war (POW). However, there are many ways you can show respect to POW/MIAs on this special day.  Many Americans across the United States pause and take a moment of silence to remember the sacrifices and service of those who were prisoners of war (POW), those who are missing in action (MIA), and their families.  All military installations across the world fly the National League of Families’ POW/MIA flag, this flag symbolizes the nation’s remembrance of those who were imprisoned while serving in the United States Military and those who remain missing to this day.

Many veterans, civilians, active duty military as well as reserve, guard, and children participate in ceremonies all over the world.  United States flags and POW/MIA flags are flown on this day and joint prayers are made for POWs and those still missing in action (MIA).  National POW/MIA Recognition Day posters are also displayed at schools, public buildings as well as government buildings to promote this special day.  Remembrance ceremonies and other events to observe the day are also held in places such as the Pentagon, war memorials and museums.

The Defense POW/MIA Accounting Agency wants you to show your support for our POW/MIAs on September 18, 2015 by displaying a special 2015 POW/MIA poster.  You can order your free poster by visiting http://bit.ly/1K5sJqD.

No matter how you choose to show your respect for POW/MIAs on September 18, 2015, all that matters is you understand the true meaning of this day and take the time to explain that meaning to your family and friends.  May we never forget the sacrifice made by our brave men and women serving this beautiful country as well as their families.

Here is to the POWs and MIAs…You Are Not Forgotten!

(Information for this blog was found at: http://www.defense.gov)