Tricare officials plan more online portal updates meant to make it easier for users to access their health records and... 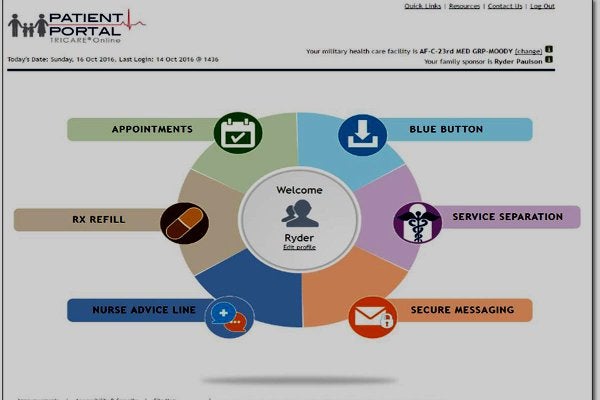 Tricare officials plan more online portal updates meant to make it easier for users to access their health records and prescriptions, and to make doctor appointments.

Tricare Online, as the site is known, has long allowed beneficiaries some access to a web-based appointment booking system, health records and prescription refill requests. But until late last year, when officials launched sweeping improvements to the site, it was not user-friendly and was plagued with technical problems.

“We don’t like to admit it much,” Army Col. Richard Wilson, who heads the Defense Health Agency’s solutions delivery division, told Military.com. “Tricare Online, years ago, did not start out very well. They did a poor job launching it and architecting it.”

To do so, Wilson said, his team had to completely redesign the look and feel of the site, while upgrading it to be faster — making portions available on mobile devices, increasing available health information for users, requiring military treatment facilities system-wide to make appointments available online, and adding new functionalities, such as easier access to health records.

The bulk of those improvements went live last October, Wilson said. This fall, the team plans to make a few more major additions, including allowing parents online access to the health records of users under 12 years old, and adding health record access to the mobile version.

Those improvements mean users who have steered away from Tricare Online because they had a bad first experience several years ago should give the system another try, Wilson said.

“If you haven’t touched it in five years, you should see more appointments,” he said. “The real crux of it is we wanted to make sure this thing was patient-centered.”

Tricare Online has 700,000 active users, Wilson said, with 10,000 log-ins via mobile devices during a single week early this month. Officials expect those numbers to increase as the site’s functionality gets better.

Use of the site by Military.com found that, although the user experience has drastically improved since the spring of last year, it is still sluggish. While using three internet browsers — Chrome, Safari and Internet Explorer — on both a Windows-based computer and a Mac, the site repeatedly timed out while accessing data via the prescription and patient data sections.

Wilson said increased site speed and stability are among his team’s long-term goals. He said the team also plans to add a single sign-on feature that will allow users to access Tricare’s provider messaging system, Relay Health, without logging in with a separate set of information.

“We want things safe, we want things quick and easy — I think that is the expectation of users in today’s environments,” he said. “We want to enable the patient to take an active role in their health care and, at the same time, to make sure [the site] is supporting our local military treatment facilities in their missions.”