Trump picks Heather Wilson for Secretary of the Air Force 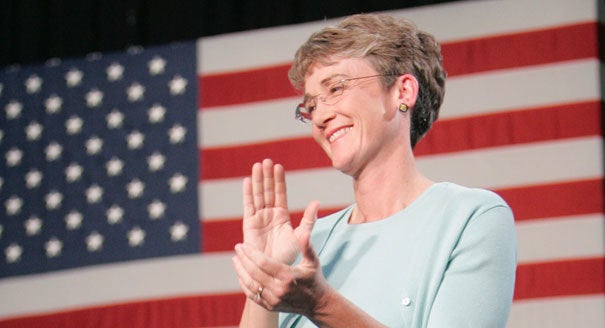 President Donald J. Trump has nominated Heather Wilson, an Air Force Academy grad and first female veteran elected to a full term in Congress, as the next Secretary of the Air Force. If confirmed, she would be the first USAFA graduate to serve as secretary.

Wilson grew up in a family of military aviators. Her grandfather was a Scottish courier pilot during World War II and her father was in the U.S. Air Force. She graduated from USAFA in 1982 (the third class to include females) and, although she wanted to be a pilot, accepted a Rhodes Scholarship instead, which put her on a different career path. During her seven years on active duty, she served as a political officer in England and a planning officer at NATO headquarters in Belgium.

Wilson worked in both the public and private sectors before running for one of New Mexico’s congressional seats in 1998. She won despite being outspent by her opponents both during the primary and general election. She went on to serve in Congress until 2008 when she decided to run for the U.S. Senate. She made two attempts to win a senate seat but lost both times.

Wilson has weathered a couple of scandals during her legislative career, most notably receiving $10,000 in campaign donations in 2004 from a bogus political action committee — money she returned once it was flagged — and being labeled by another PAC as a member of “the dirty dozen” in 2006 for her consistent support of the energy industry over her constituents.

In 2002, Wilson voted in favor of the invasion of Iraq.

She has served in her current job as the President of the South Dakota School of Mines and Technology since 2013.

“Heather Wilson is going to make an outstanding secretary of the Air Force,” Trump said in the statement.