President Donald Trump said Friday that he would review policies that keep troops from carrying personal weapons onto military bases. “If... 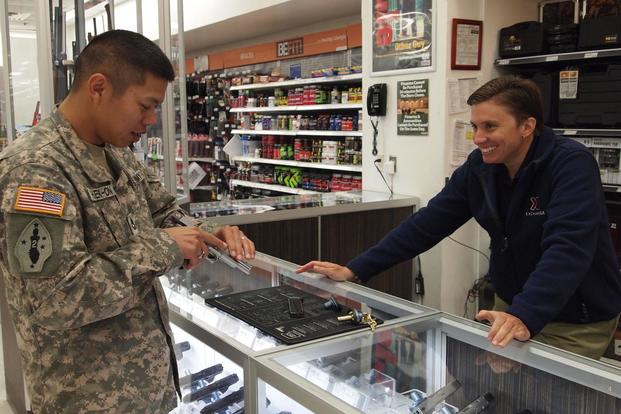 President Donald Trump said Friday that he would review policies that keep troops from carrying personal weapons onto military bases.

“If we can’t have our military holding guns, it’s pretty bad,” Trump said in a wide-ranging speech to the annual Conservative Political Action Committee conference in Maryland, “and I’m going to look at that whole policy on military bases.”

“So we want to protect our military. We want to make our military stronger and better than it’s ever been,” Trump continued in the speech, in which he also renewed his call for allowing trained teachers and military retirees to carry concealed weapons in schools.

Schools and military bases currently are “gun-free zones” that are easy targets for deranged shooters such as the one in Parkland, Florida, who killed 17 at Marjory Stoneman Douglas High School , Trump said.

Defense Department policy mainly has been that base security is the province of military police. In most cases, troops are required to leave their personal weapons at home or check them at the gate in an effort to prevent accidental shootings and discourage suicides.

“We had a number of instances on military bases, you know that,” Trump said in his speech, apparently referring to active shooter episodes.

In making the case for personal weapons on military bases, Trump appeared to be referencing the July 2015 incident in Chattanooga, Tenn., where four Marines and a sailor were killed.

The shootings occurred at a recruiting storefront in a strip shopping mall and at a U.S. Naval Reserve Center some miles away. But Trump said the victims “were on a military base in a gun-free zone.”

The FBI and local police said that Muhammad Youssef Abdulazeez carried out a drive-by shooting at the recruiting center and then drove to the U.S. Naval Reserve Center, where he was killed in a shootout with police.

“You know the five great soldiers from four years ago, three of them were world-class marksmen,” Trump said in his account of the incident. “They were on a military base in a gun-free zone.”

“They were asked to check their guns quite far away. And a maniac walked in, guns blazing, killed all five of them. He wouldn’t of had a chance if these world-class marksmen had — on a military base — access to their guns,” Trump said.

In his 2015 Senate confirmation hearing to become Army Chief of Staff, Gen. Mark Milley was asked about the Chattanooga shootings and said that “in some cases I think it’s appropriate” for recruiters to carry weapons for self-defense.

He said that arming recruiters was complicated by a patchwork of state laws but “I think under certain conditions — both on military bases and in outstations, recruiting stations, reserve centers — we should seriously consider it.”

Then-Lt. Gen. Milley was commander at Fort Hood, Texas, in April 2014 when Spec. Ivan Lopez opened fire, killing three soldiers and wounding 12 others before killing himself.

Numerous lawmakers then called for allowing troops to carry weapons on base, but Milley said at a news conference that he didn’t support the idea.

“I don’t think soldiers should have concealed weapons on base,” he said.